Just came doon from the isle of Skye

We had an early start on Thursday morning driving up to fort William where Col and I had arranged to meet up with his brother Lindsay, after a much needed coffee we then continued on the journey to the Isle of Skye for a long weekend of non stop fishing, yippee!
After what seemed like an age we eventually arrived at our chosen mark, a sea loch at the north west of the island, firstly we tackled up our lrf rods to see what was about on the rocky outcrop in front of us, and It didn't take long for the bites to start coming to bits of raw prawn, we landed some small pollack, coalfish, poor cod and the ones we were really after, Ballan wrasse. 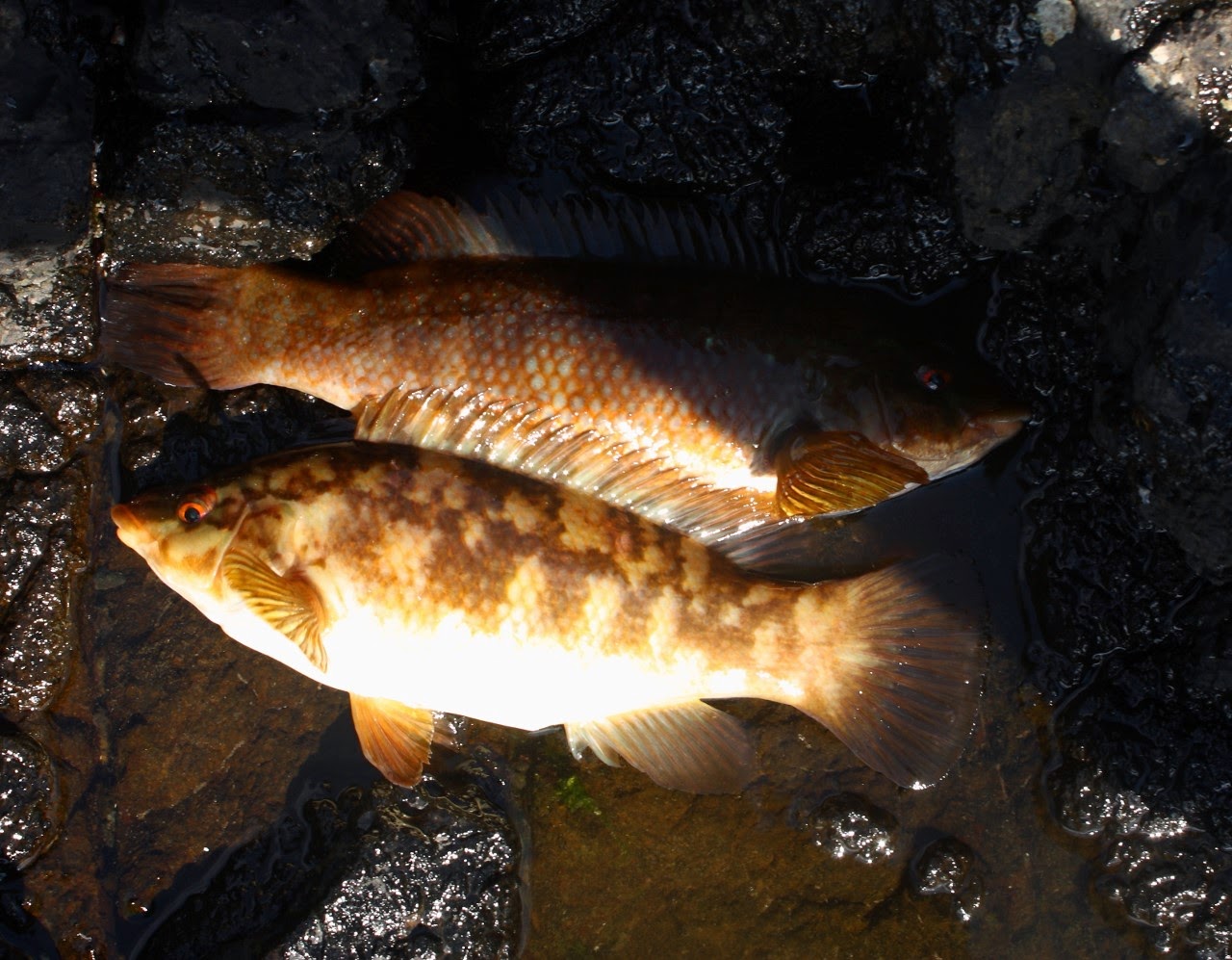 nice orange one for col 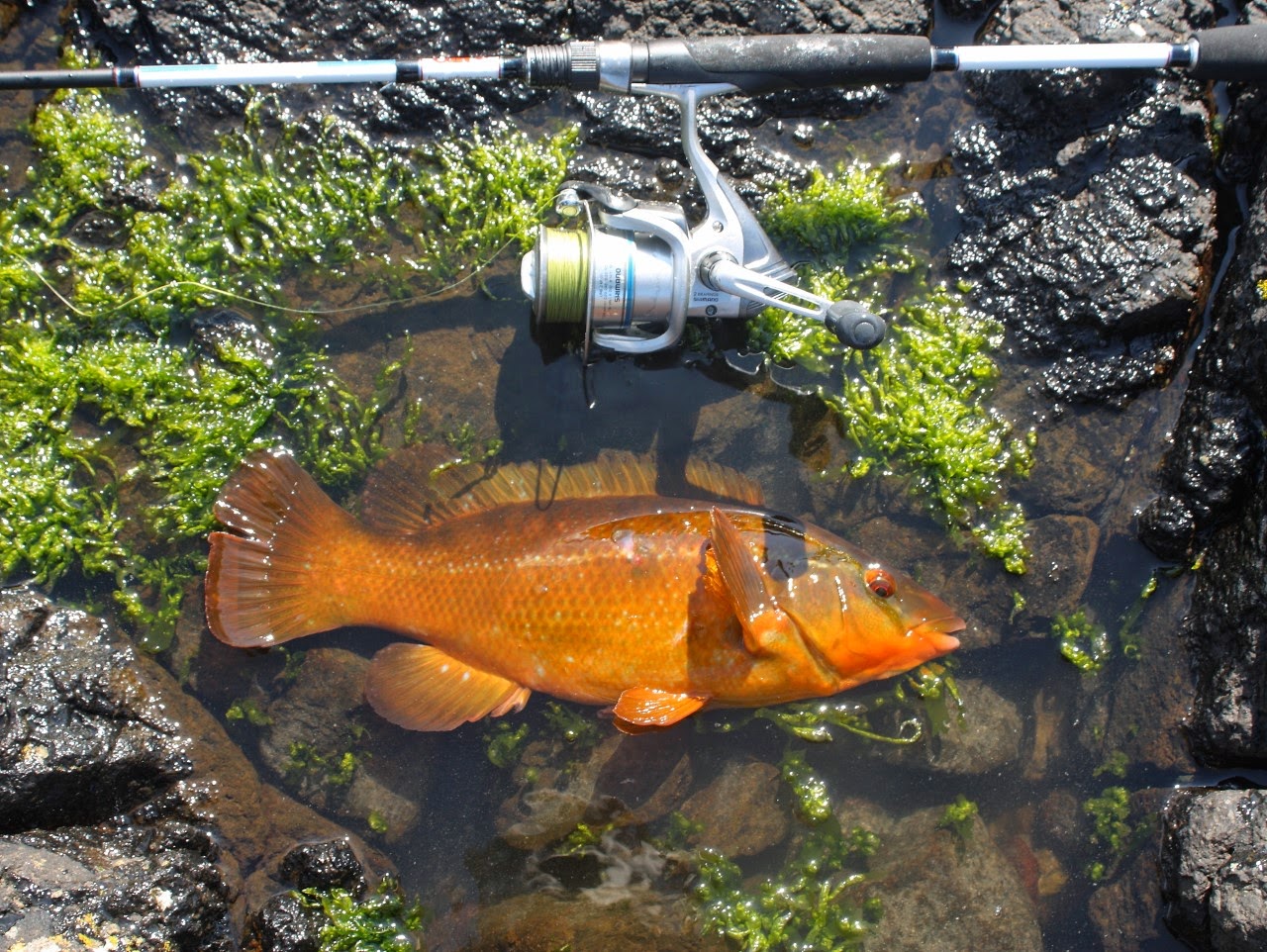 the sea was a little too rough with the northerly wind to comfortably fly fish for Pollack so later on in the day we upped sticks and went of to try another more sheltered mark which was a new one to us, it looked great but despite trying every rocky outcrop around the bay we failed to connect with any pollack, never mind it had been a long tiring day so we went back to our accommodation for some food and a couple of beers to end the day.

Friday morning feeling revitalised after a good nights sleep we decided to fish the same venue as the day before, we did have other marks in mind but this one seemed like the best bet what with the wind direction and it also had the benefit of only being  a short drive from the cottage where we were based. Over coffee in the morning we discussed how cool it would be to catch a cuckoo wrasse, and would you believe it, it only took Col about five minutes after starting to fish, jammy sod! 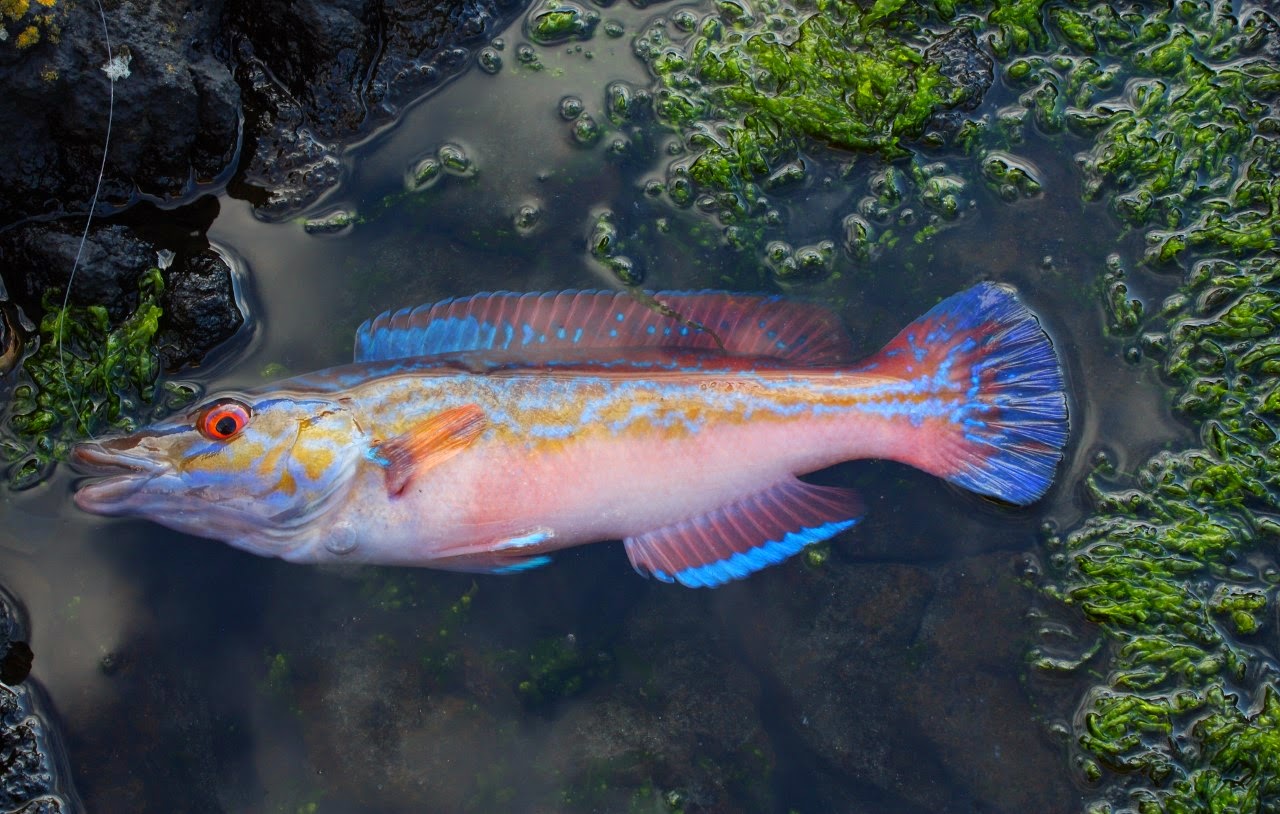 another couple of females followed from the same area 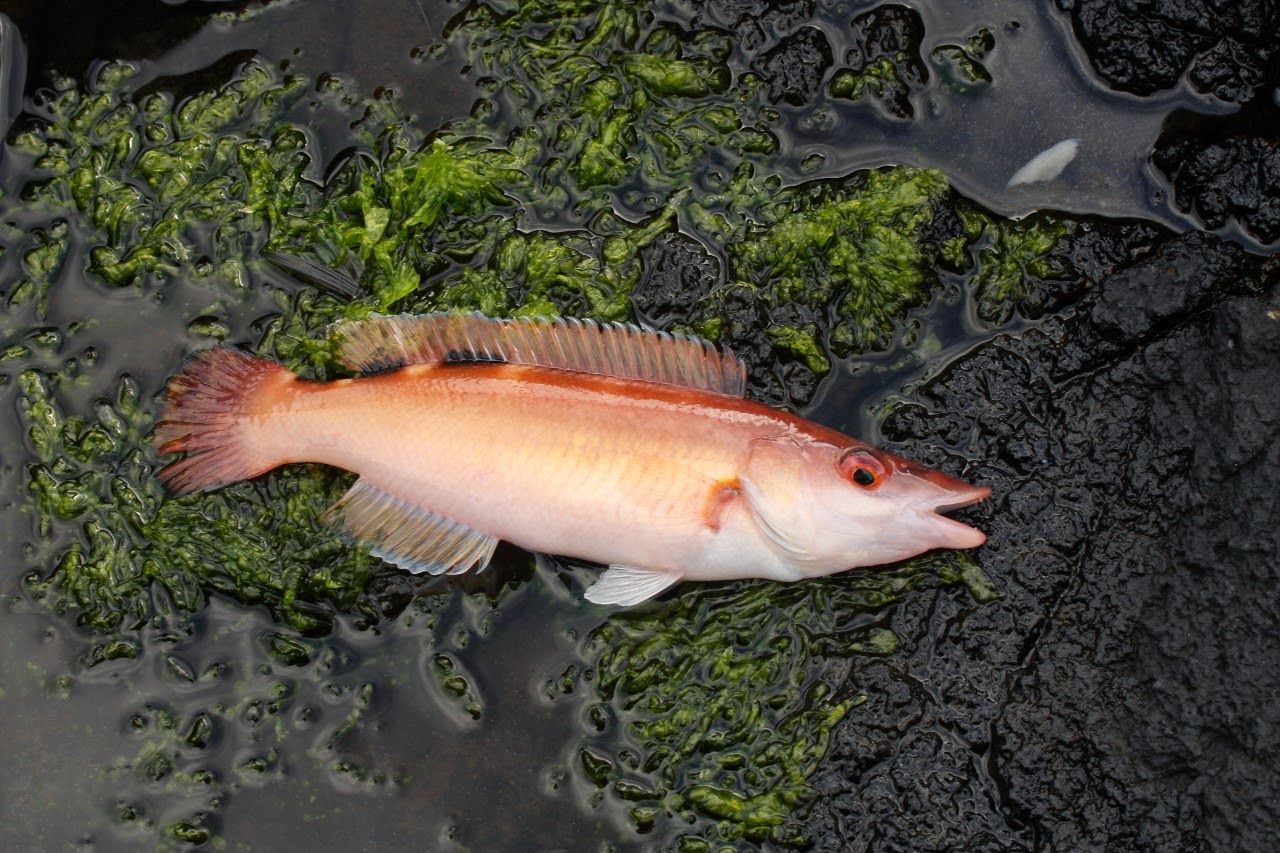 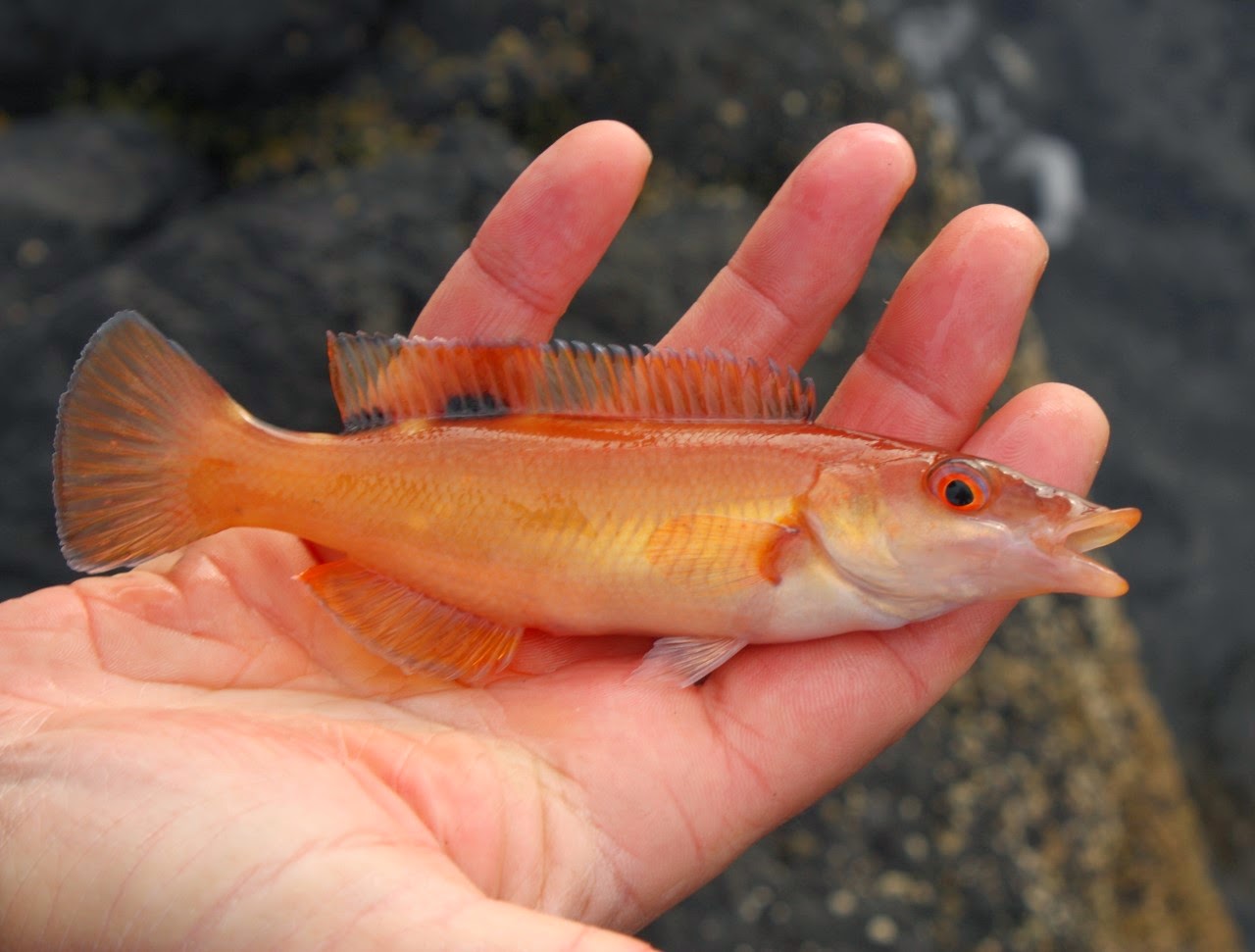 Lindsay caught a monster of a sea scorpion! 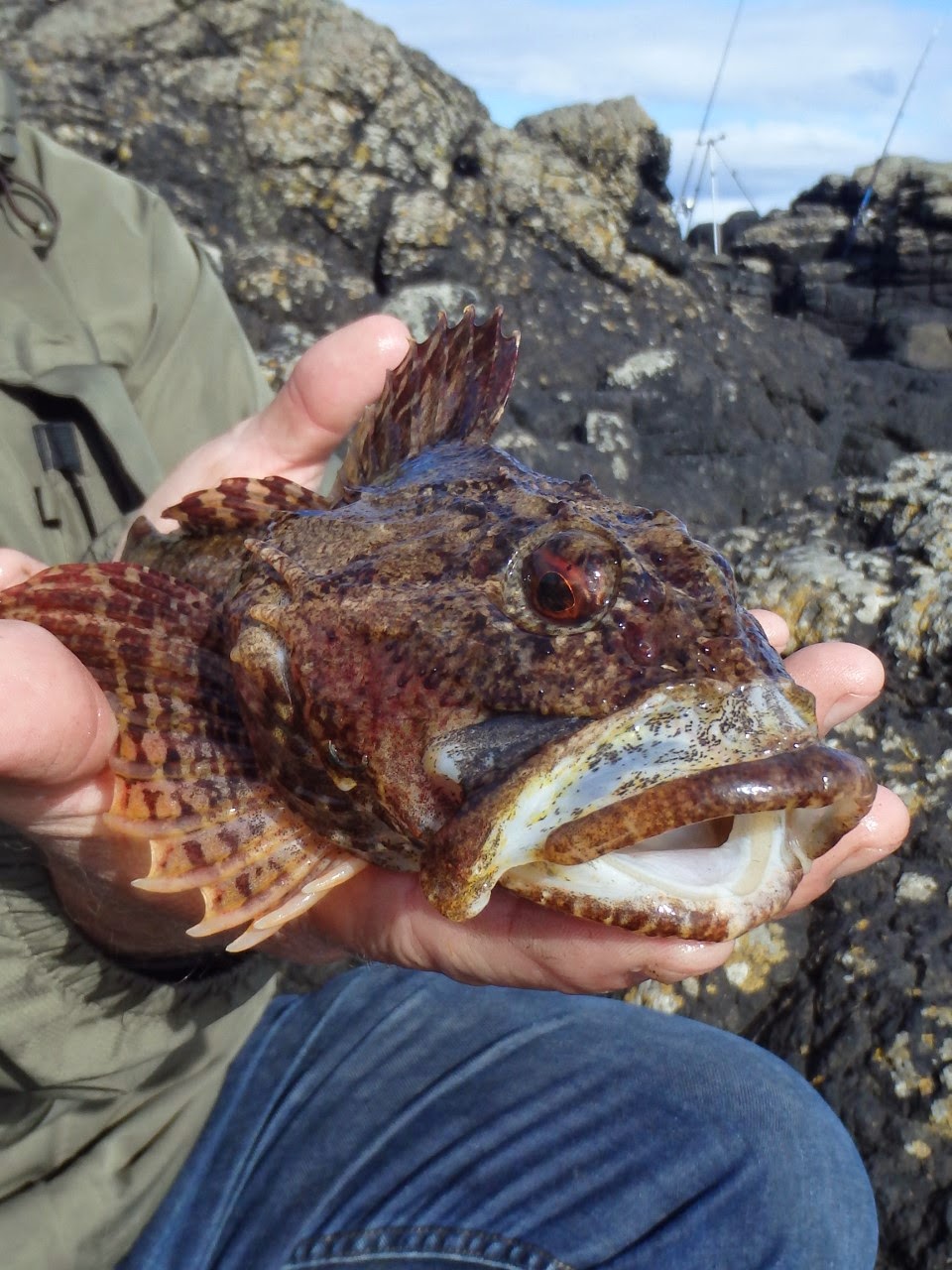 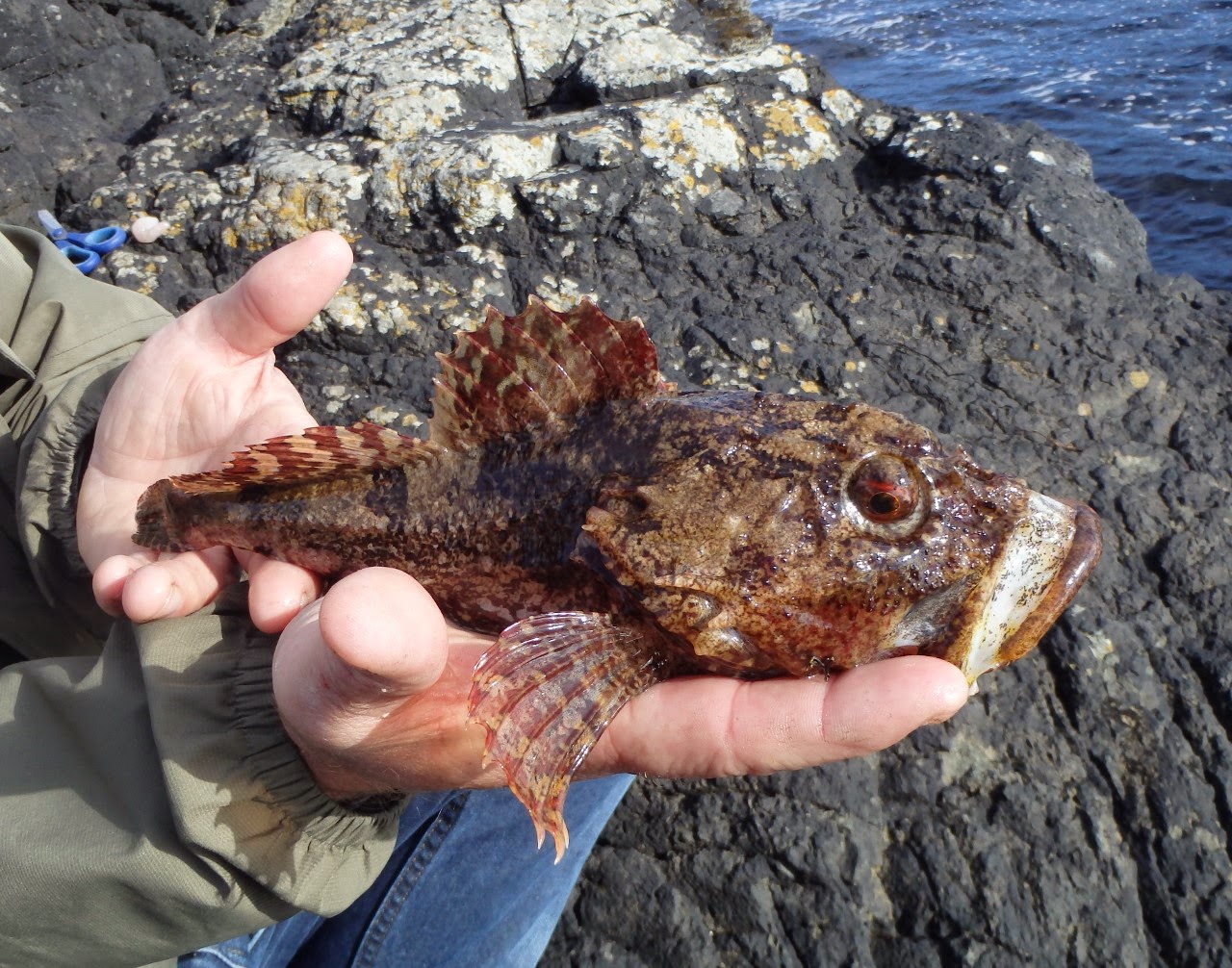 Col and Lindsay seemed to be catching plenty of poor cod, it took me a while on the other hand but i got one in the end, pretty little fish. 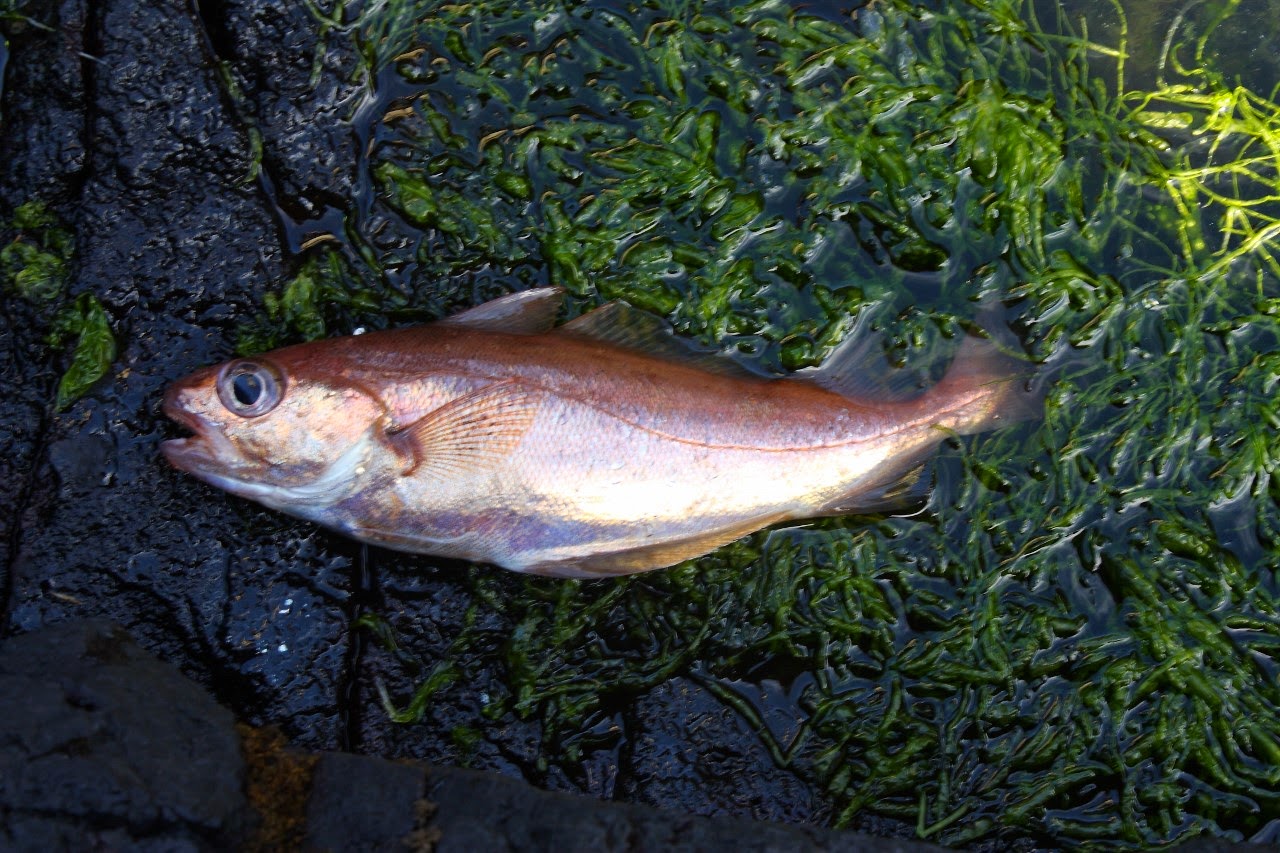 plenty more ballans about too 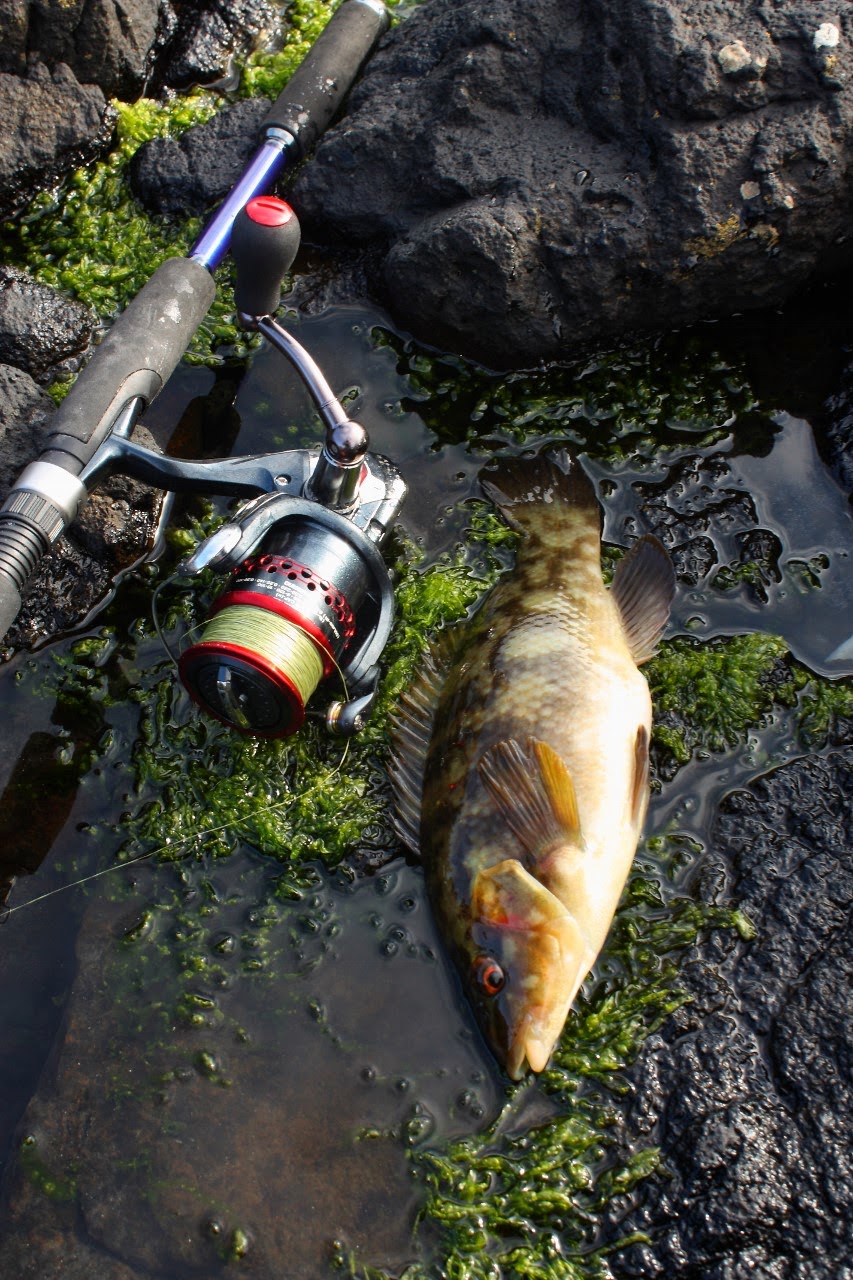 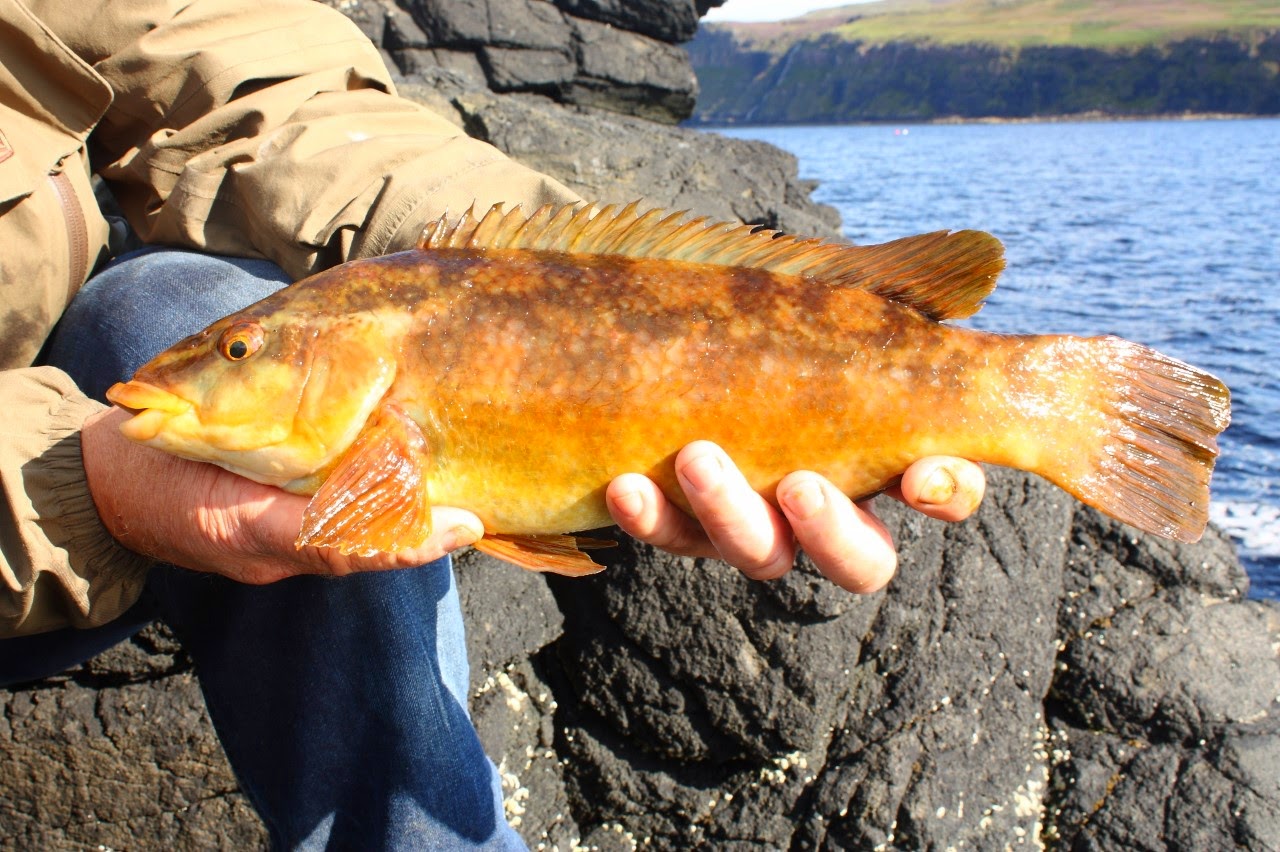 another new wrasse species for Col, a rock cook 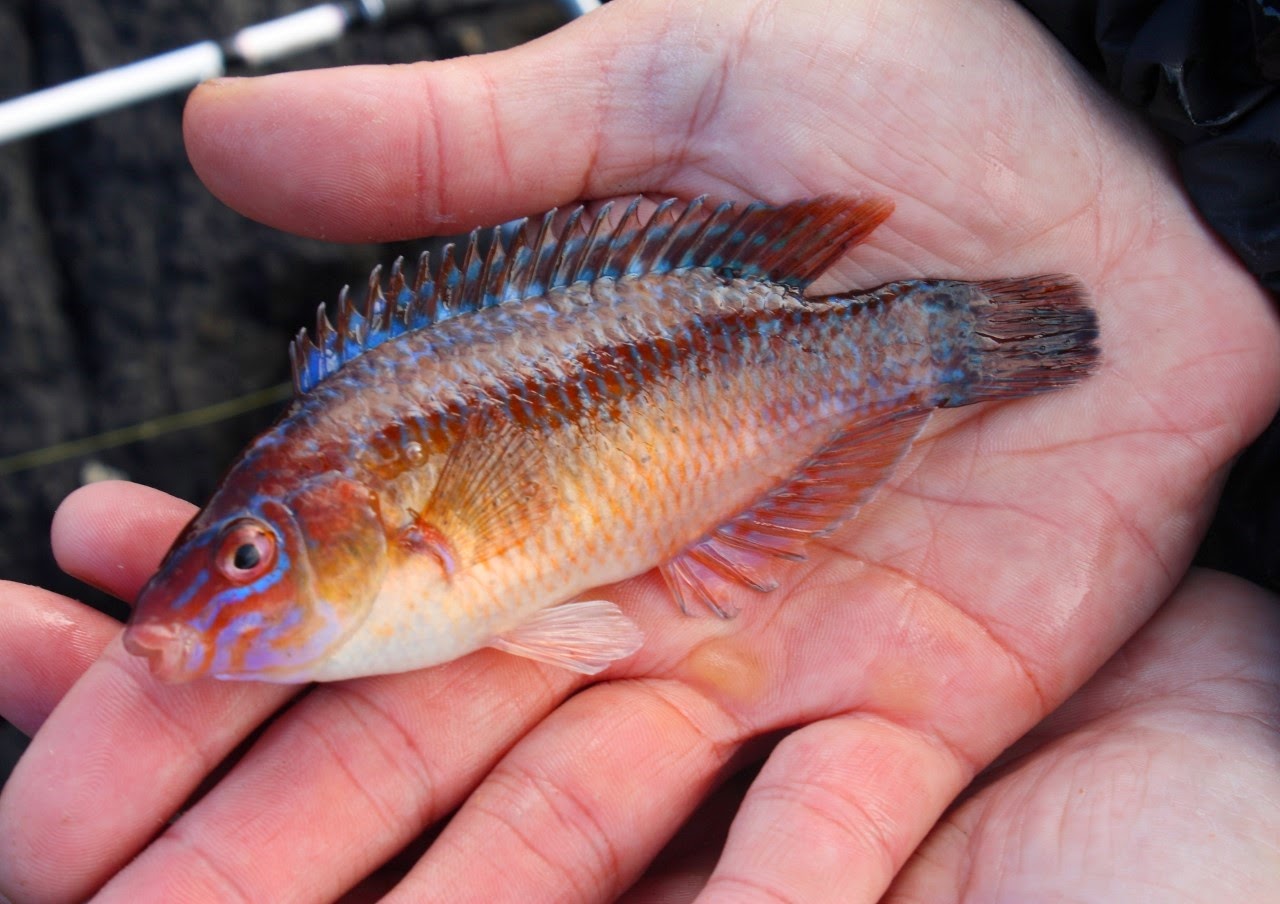 later on in the day Col landed a couple of pollack on the fly from his "rock" before the wind picked up, all in all a great days fishing 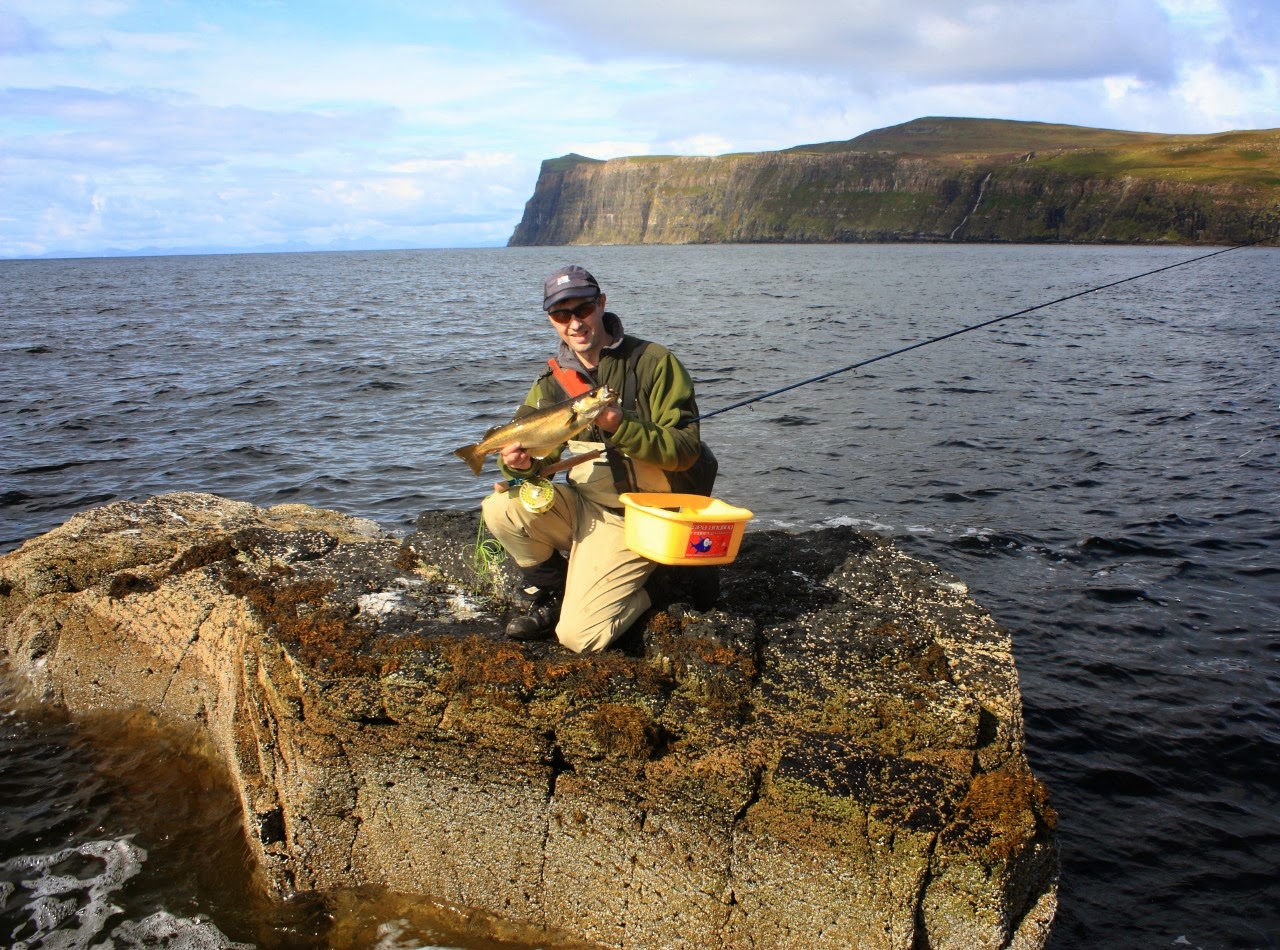 On Saturday morning we headed into Portree to see if we could buy any more raw prawns and some leads, we got the leads ok but no luck with the prawns, we did notice however that the harbour was stuffed with Mackerel so we grabbed the rods from the car and caught a few for chucking out a bait on the big rods later on. So after some food we were back at the same spot yet again! Col thought there would be a good chance of a goldsinny and he was right! 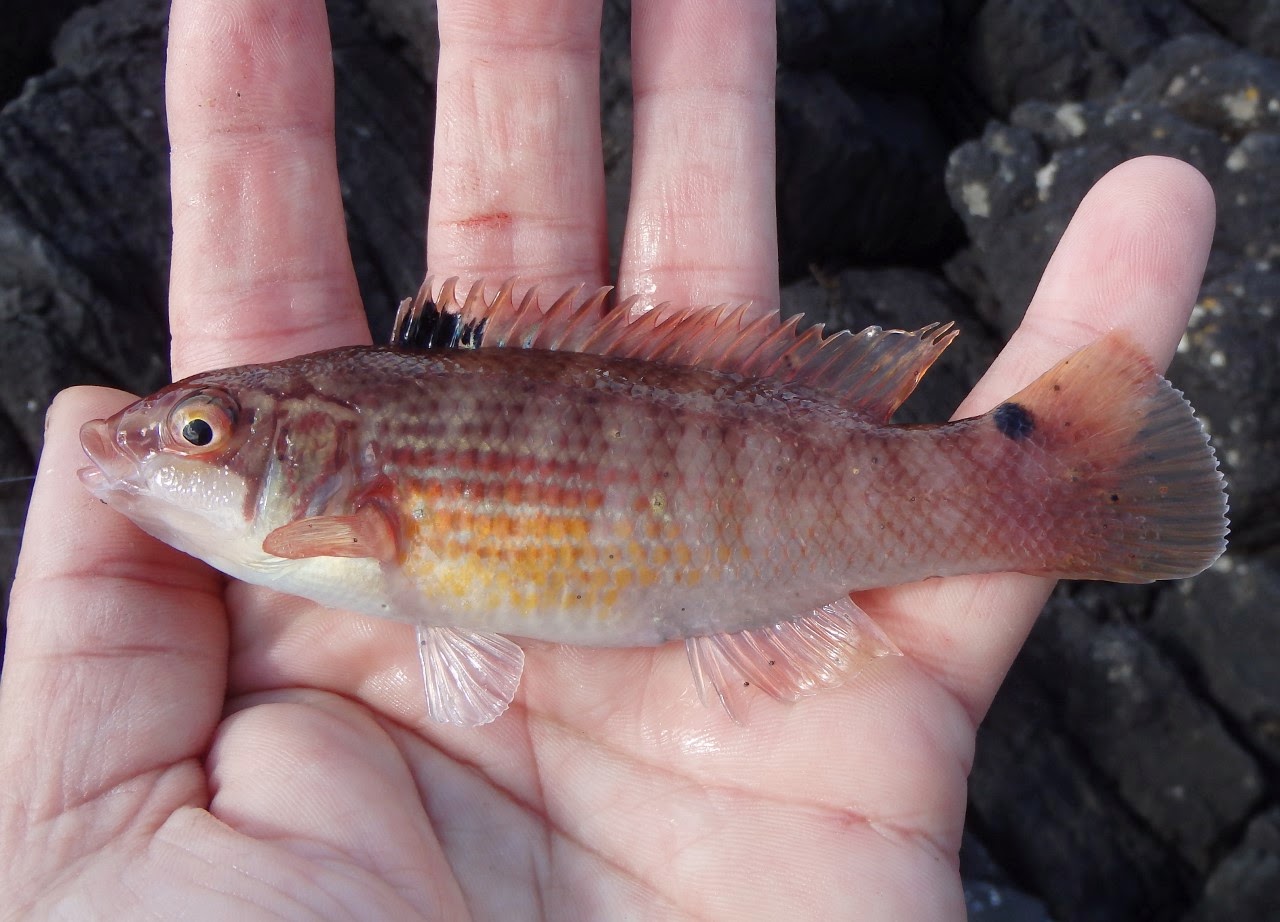 Lindsay's big rod with the mackeral bait registered a bite, it turned out to be a dogfish which was quite exciting for us as non of us had ever caught or even seen one before. 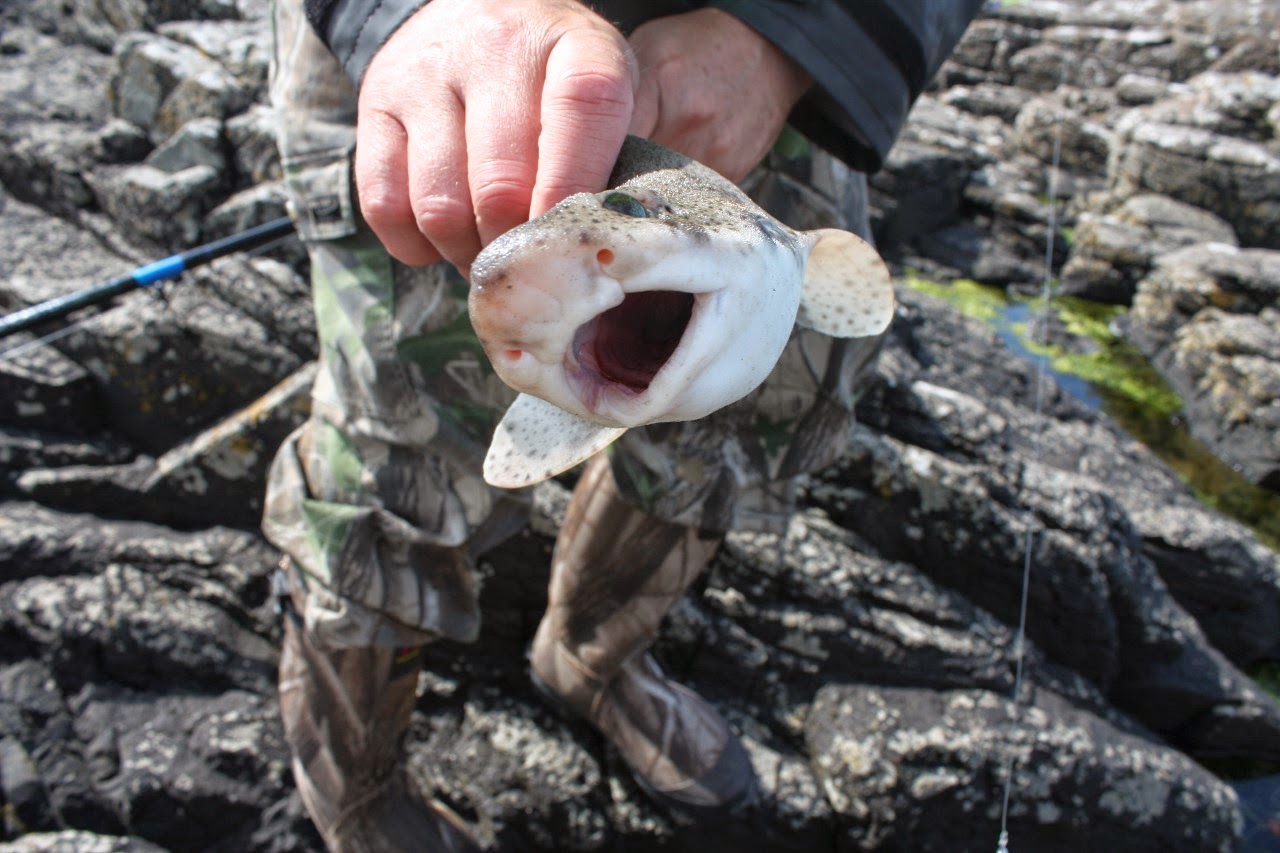 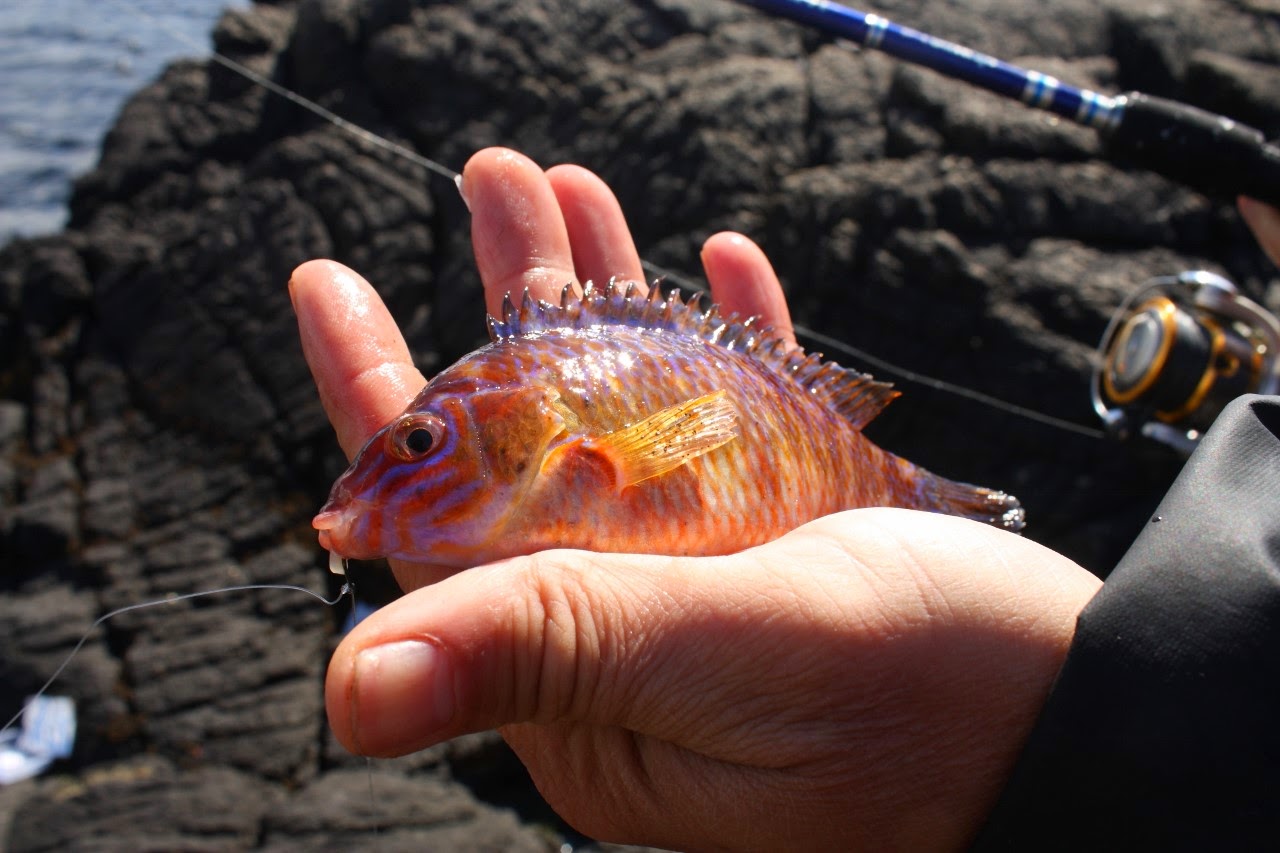 after a while we decided on a move so headed around to Neist Point where we took some nice Pollack on the fly, orange clousers worked well as did chartreuse, great fun on the fly rod. 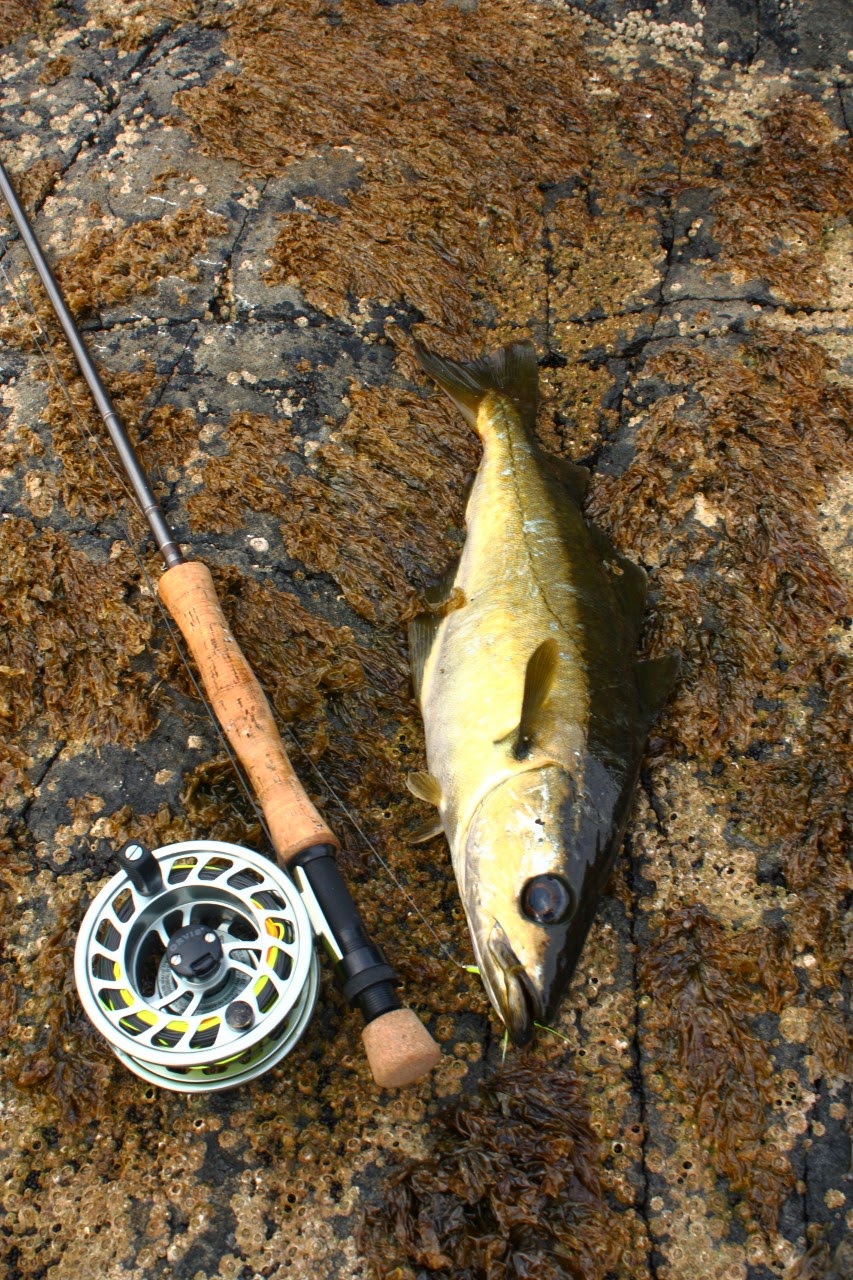 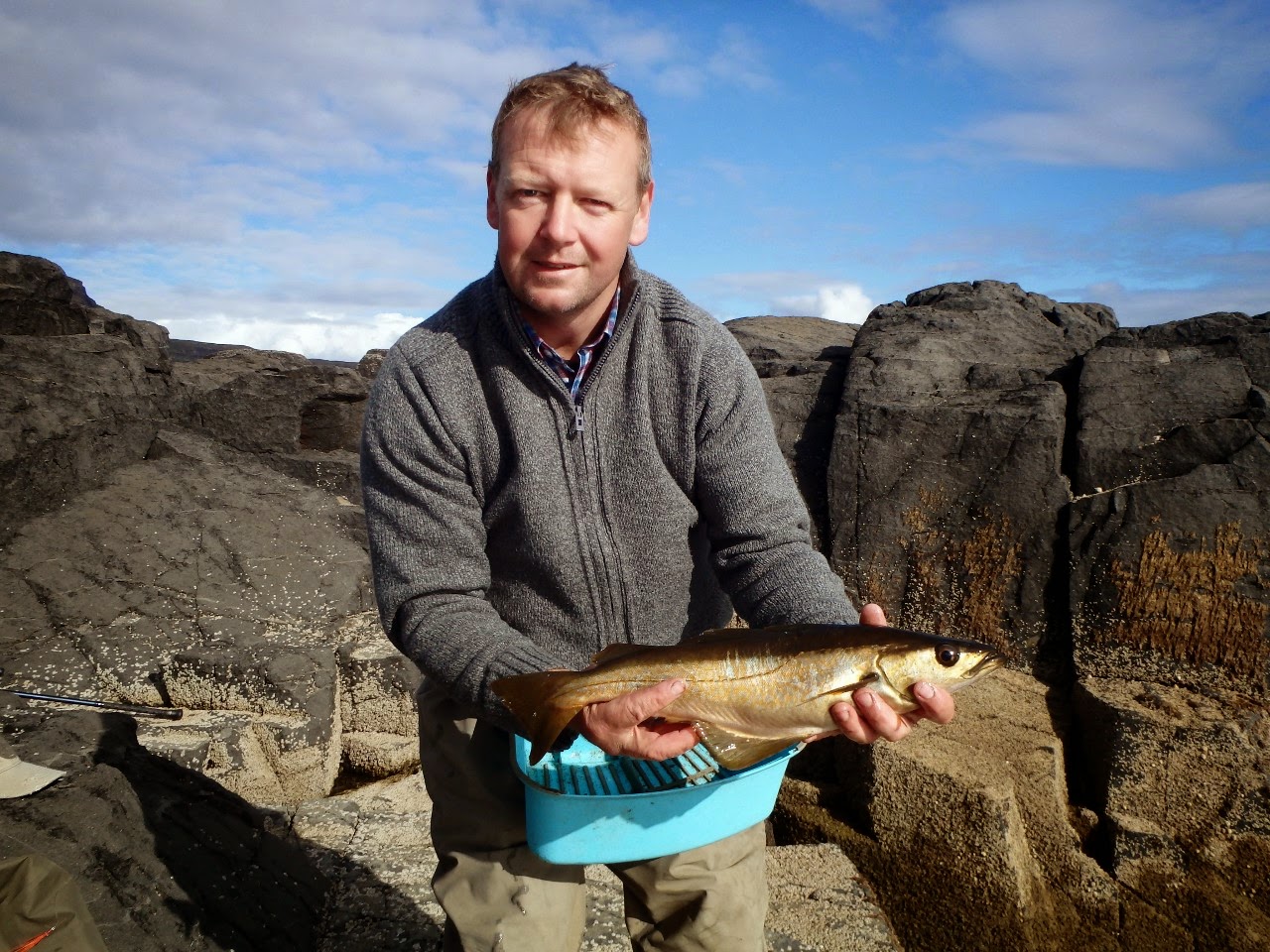 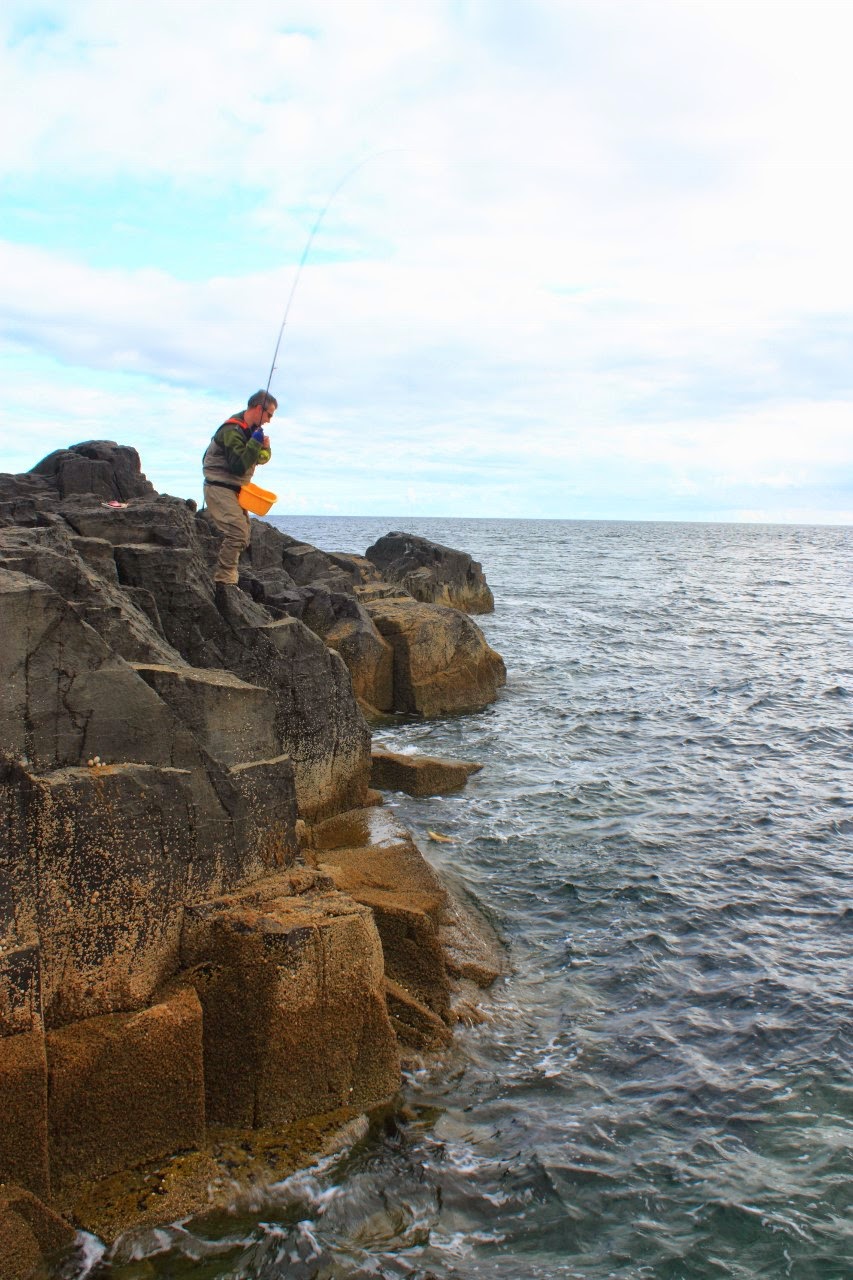 on Sunday morning Lindsay headed for home whilst col and i had one last chuck for an hour or so, i failed in my attempt to catch a rock cook wrasse but Col took a few Pollack from his rock to end a great weekends fishing, can't wait until next year! 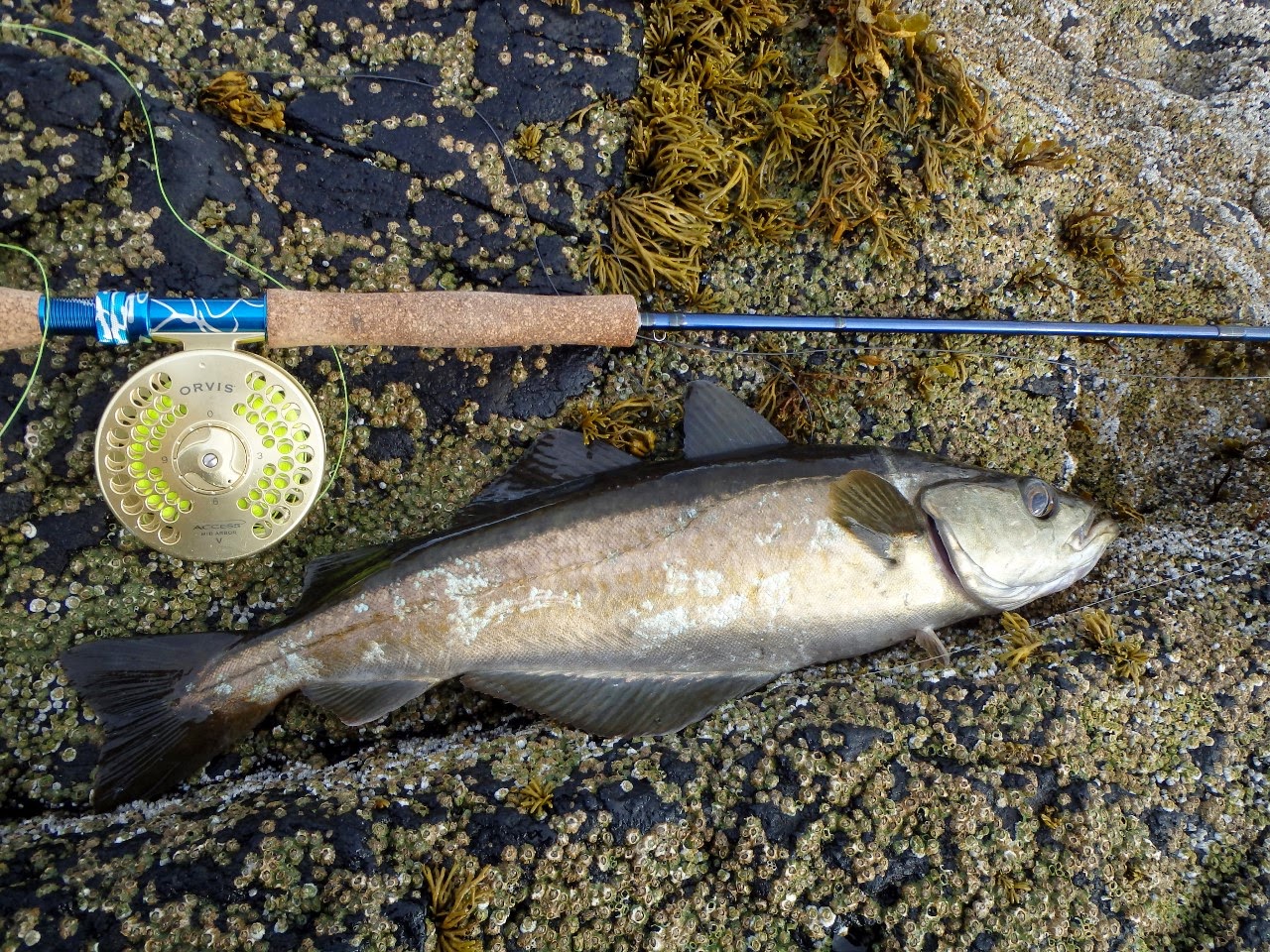 coming out of the summer doldrums?

Yesterday morning i was having a look at the sepa river level site to see if the recent rain had made any difference to the summer lows we have just now, by chance i clicked on a perthshire stream which looked like it had rose a little in height,  not having fished it for some time now i was keen to give it try. 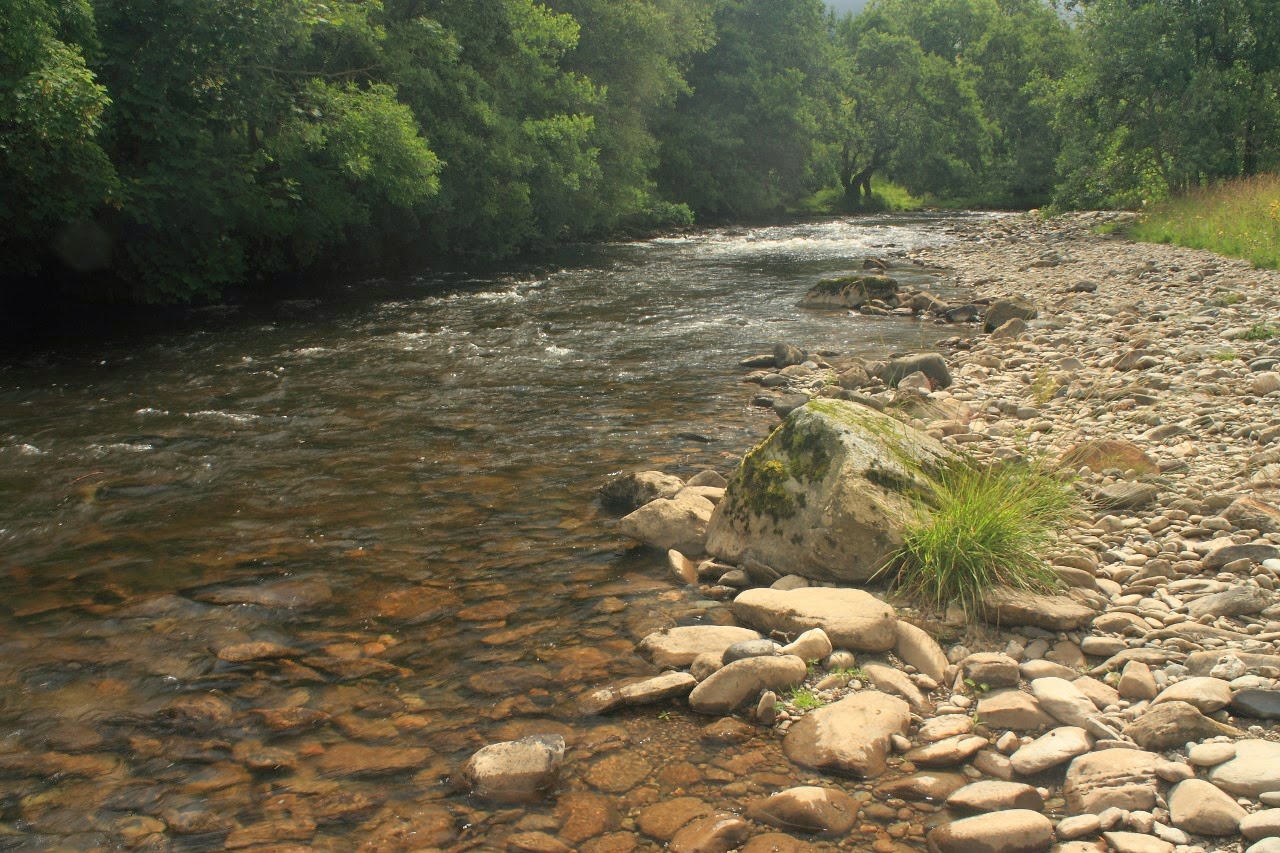 its a beautiful stream to fish,  rocky with fast pocket water and pacey pools 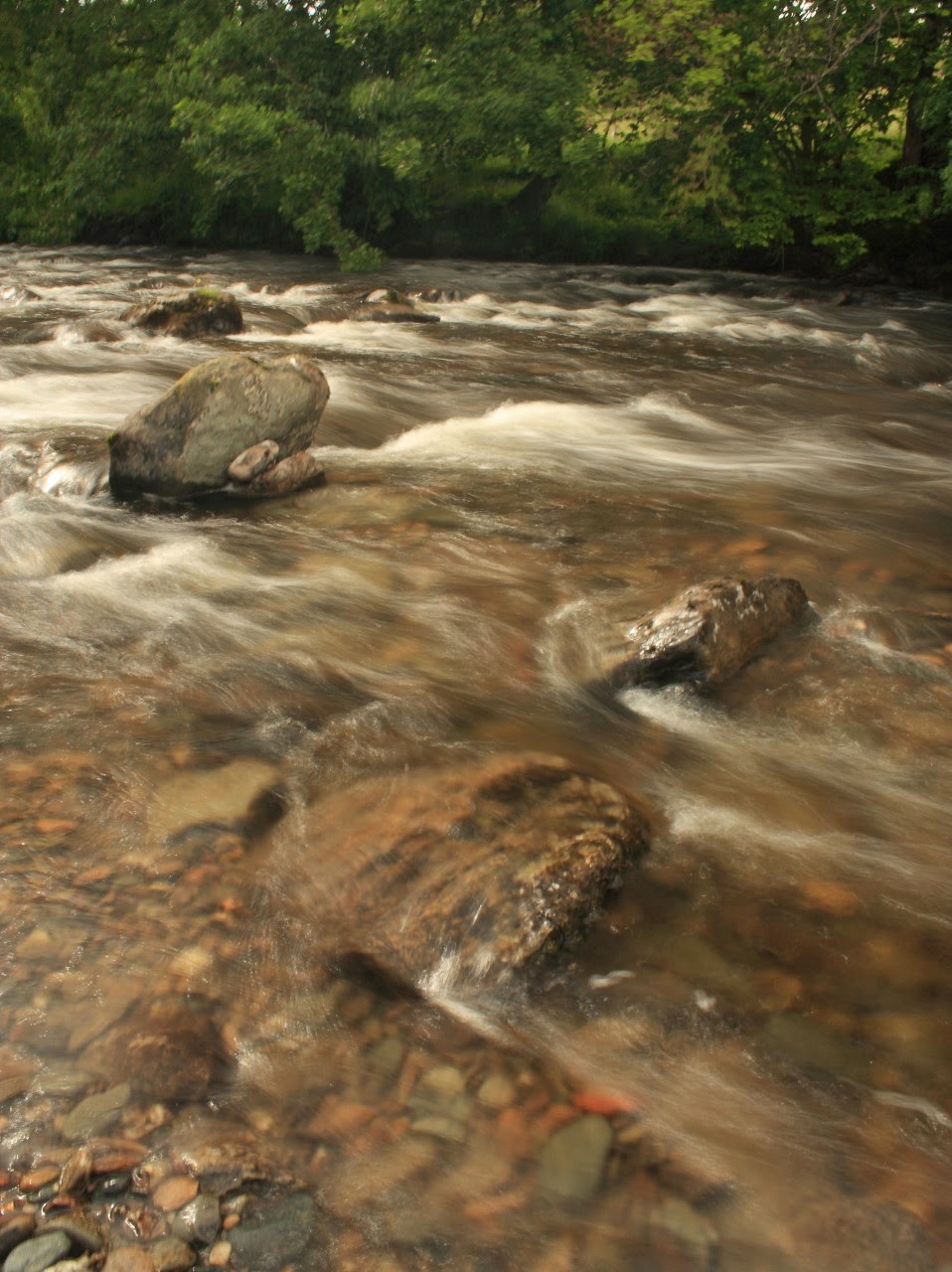 i took the first of the day on the nymph 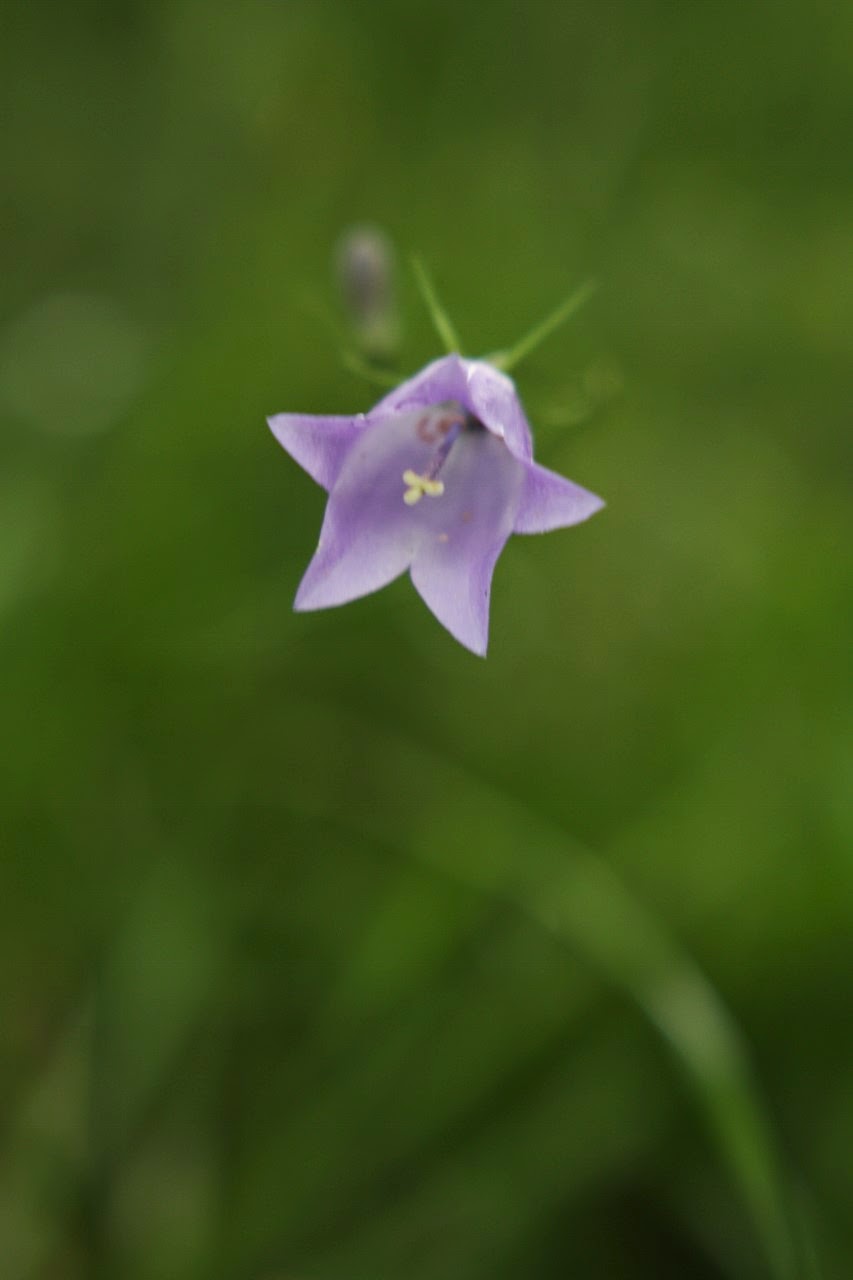 the cdc & elk, klink and nymph all took their share,  nothing big but great fun. 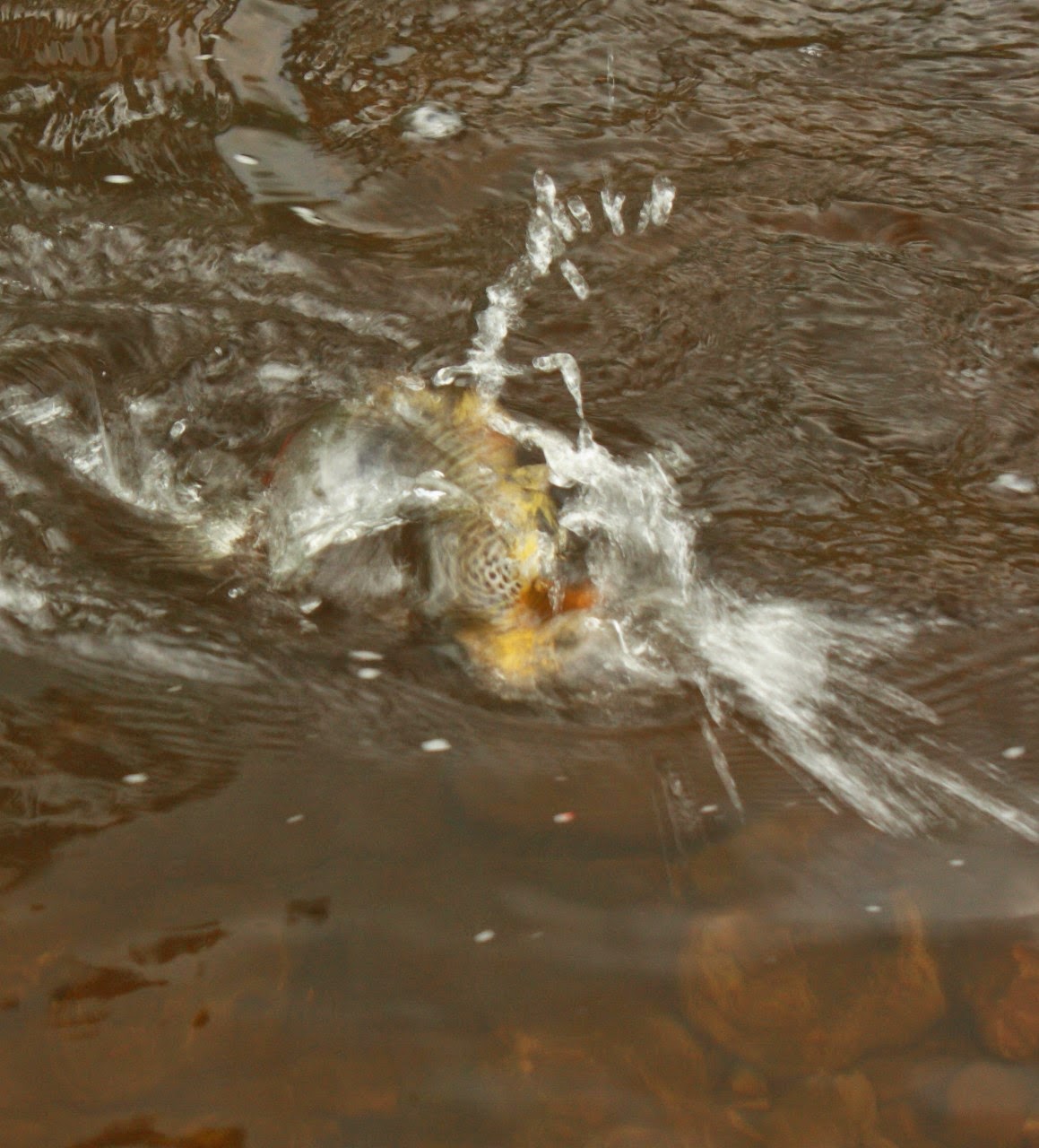 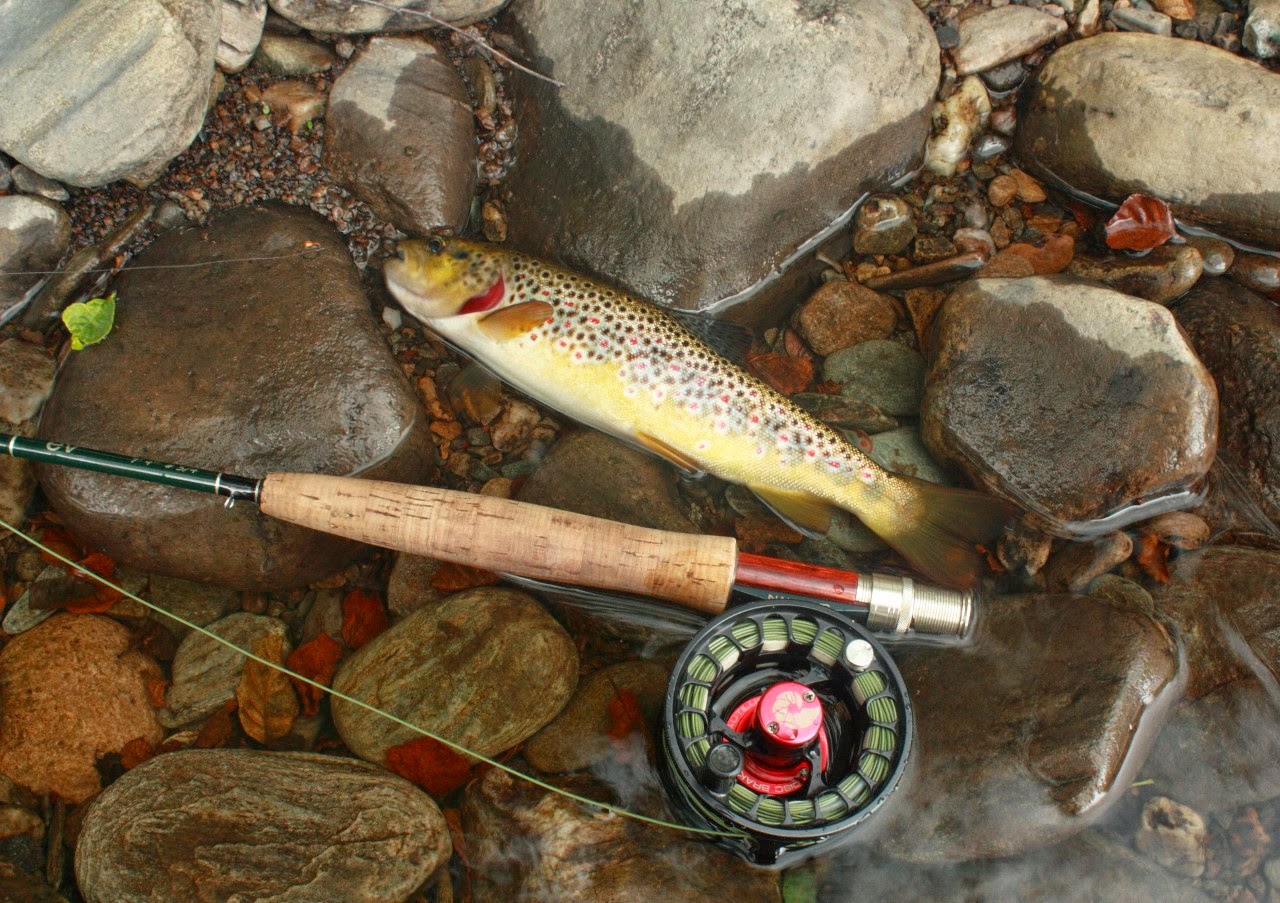 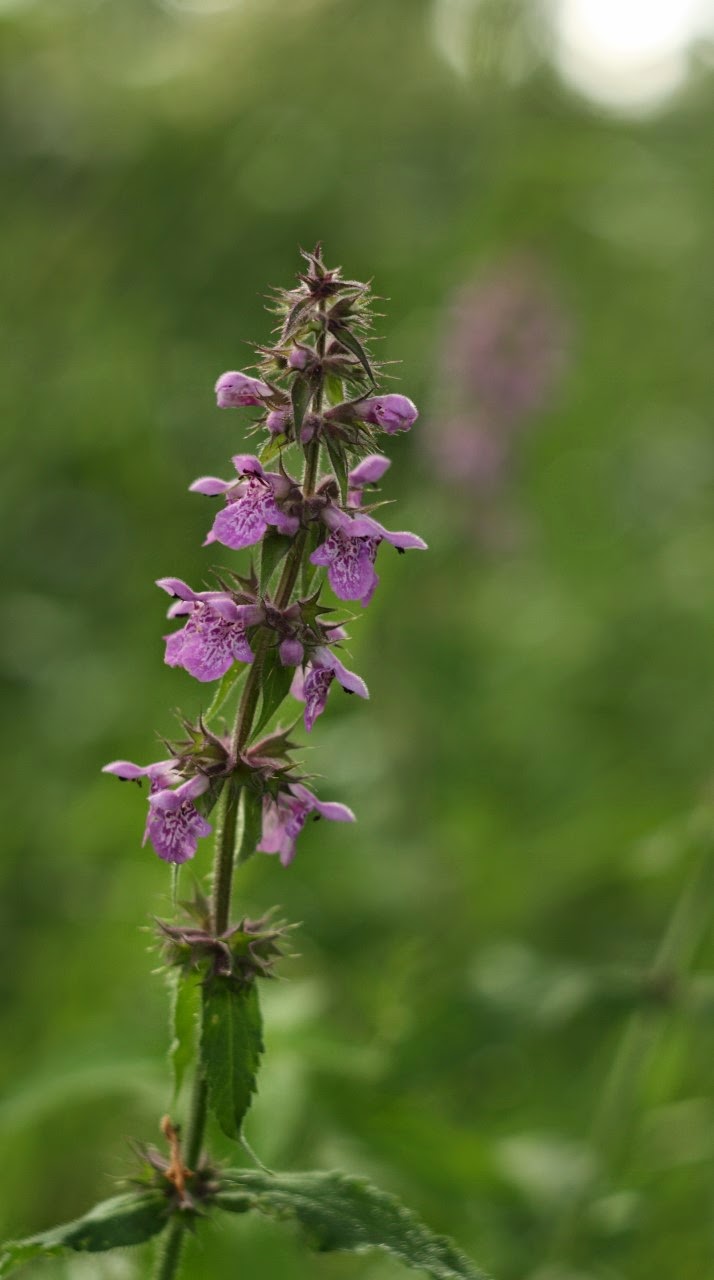 it was great to be out fishing again, a bit more rain in the remaining couple of months of the sesaon would be nice, not to much mind you! 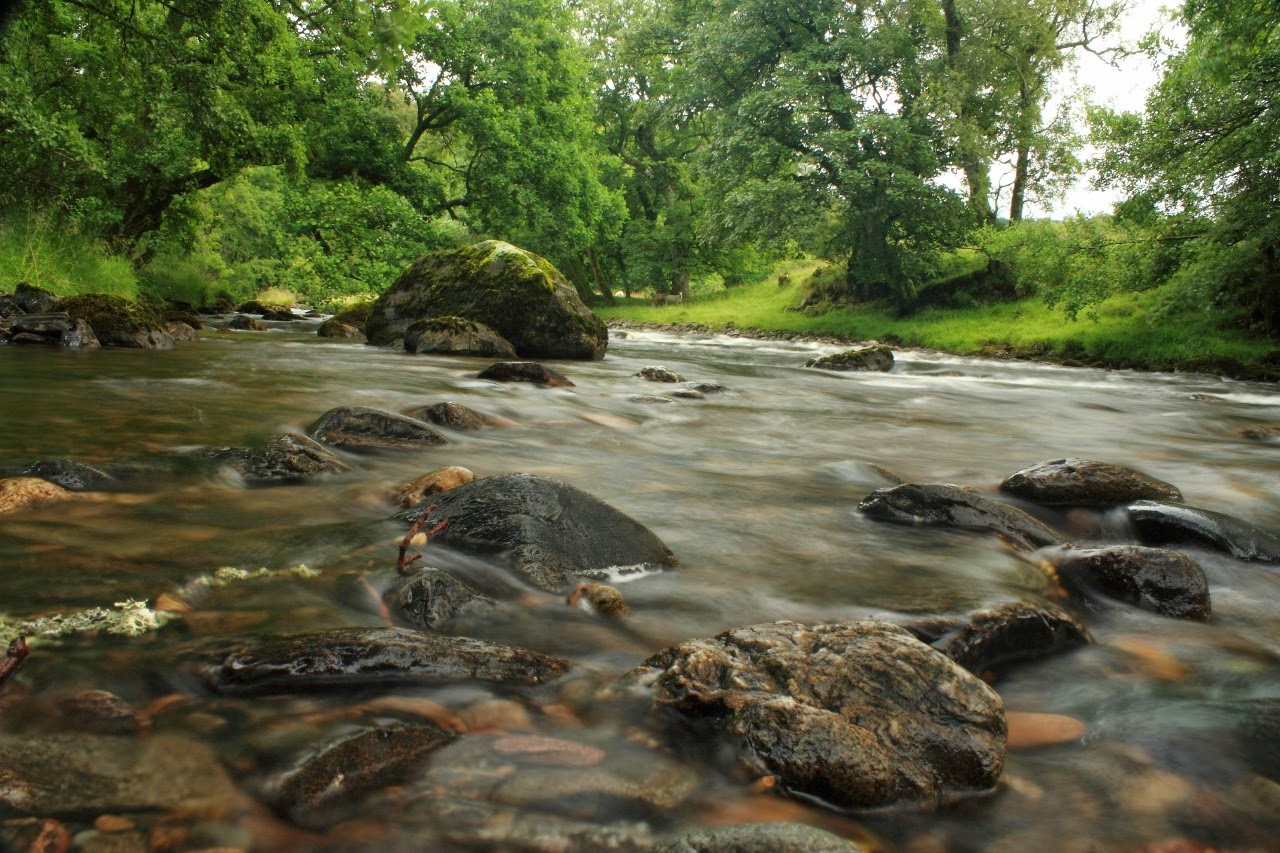