Wrasse me up when September ends

The back end of the trout season has been a bit of a disappointment to be honest with the rivers and burns now down to their bones,  and with the season soon coming to an end  I doubt I'll be fishing for trout again until next year now. Not that I'm too bothered as there's plenty of other species to target in the months ahead.

The dry and mild September has been great for Col's wrasse fishing exploits on the other hand so when he suggested that we go over to Burntisland on Sunday I jumped at the chance, I've had a couple of short visits there myself this summer failing miserably on both occasions so I was keen for Col to show me the ropes. We arrived an hour before low tide and our first job to do was dig some rag worm, Col has a garden fork conveniently stashed in the undergrowth so he doesn't need to carry it on the train all the time!  after twenty minutes digging we had more than enough rag to do us the afternoon.

Once at the harbour we fished away in the inside wall for an hour or so without much interest apart from the odd tap, then Col took the first Wrasse of the day, a little Ballan in what could have only been a couple of feet of water max followed by his first Goldsinny wrasse of the day 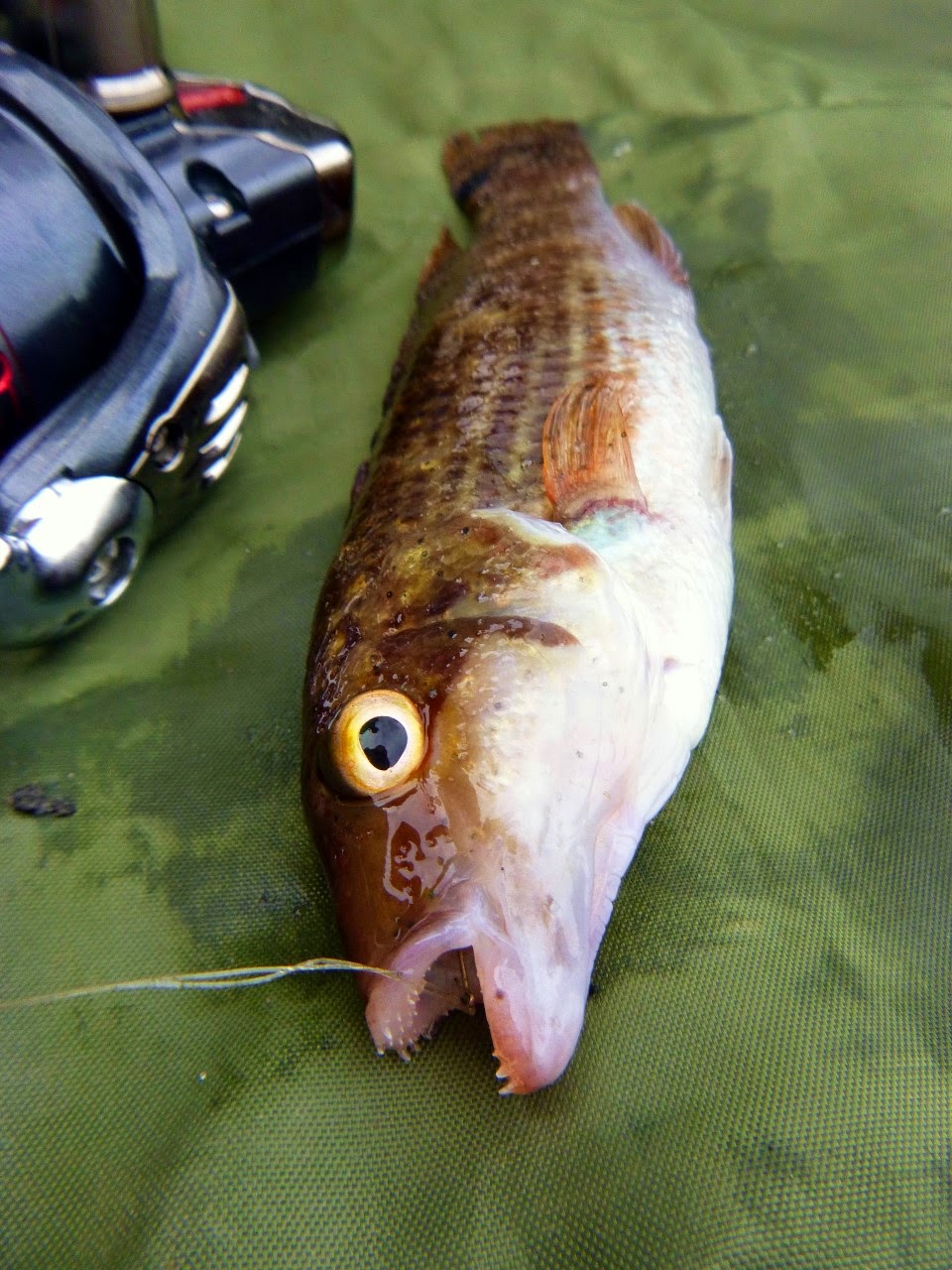 switching between fishing on the inside and outside of the harbour wall the familiar tap tap bang bites of the wrasse became more frequent as the tide came in, 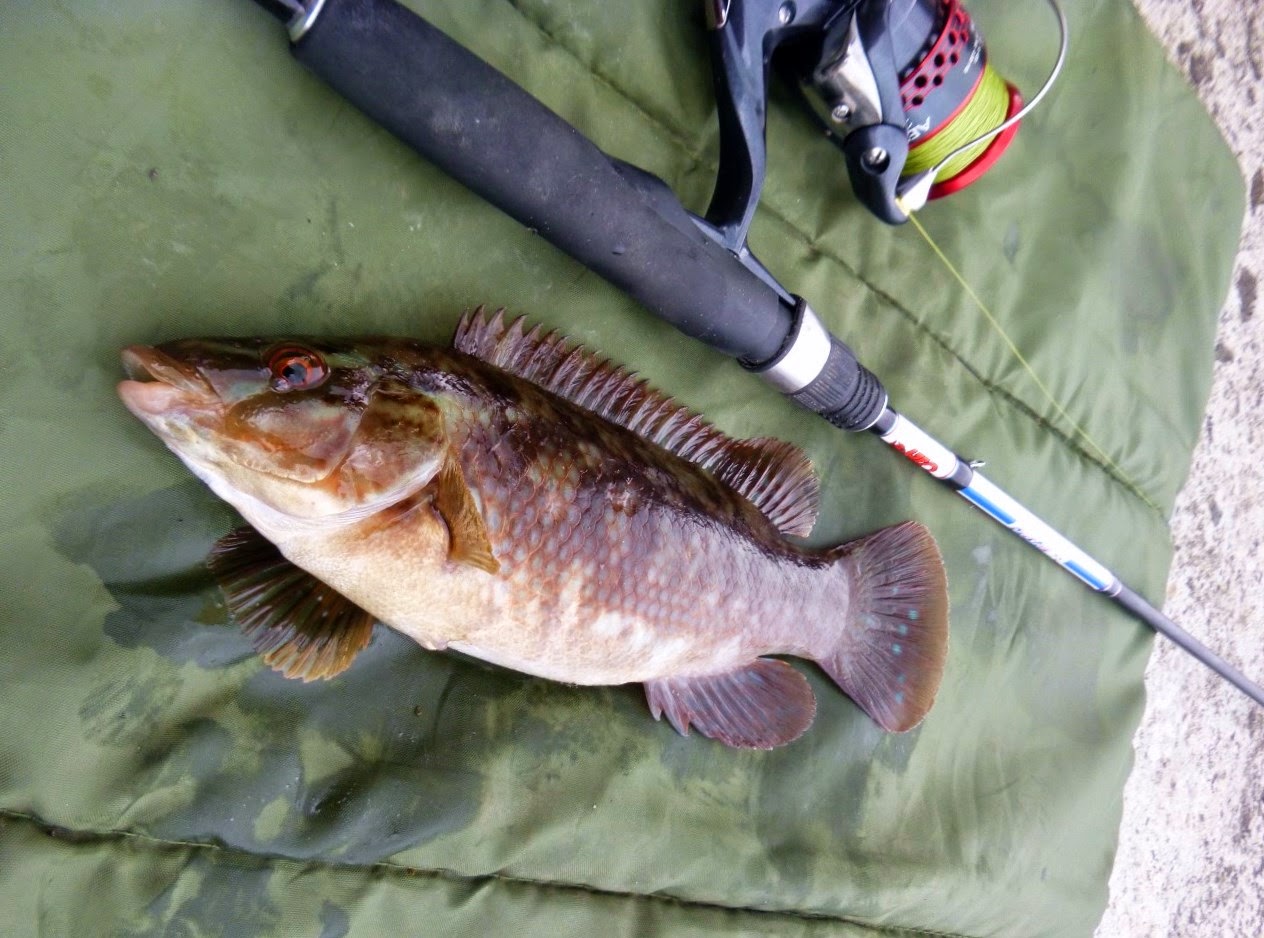 Col was broken by this one only to catch him a little while later on and get his hook back! 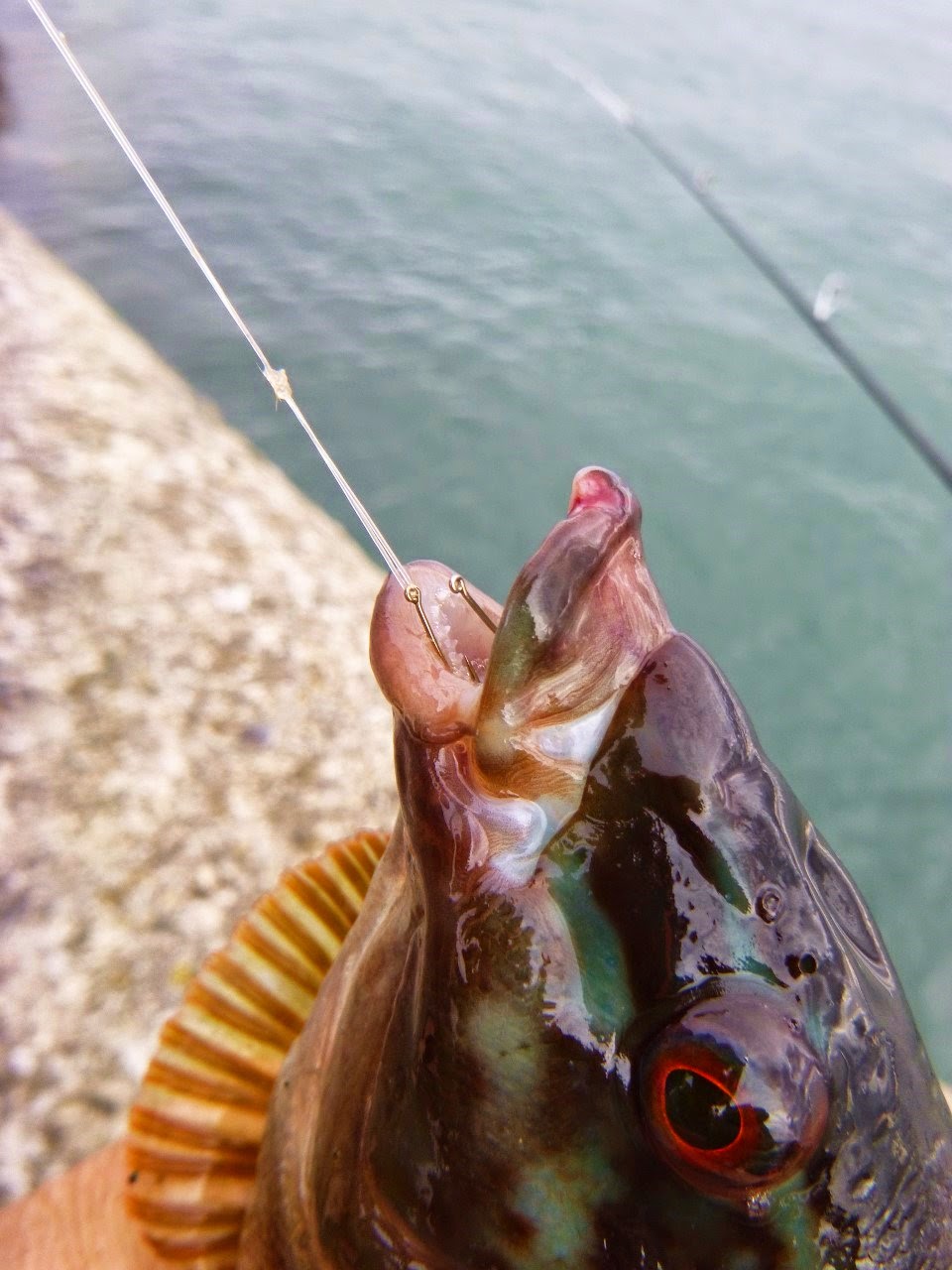 a goldsinny and a ballan 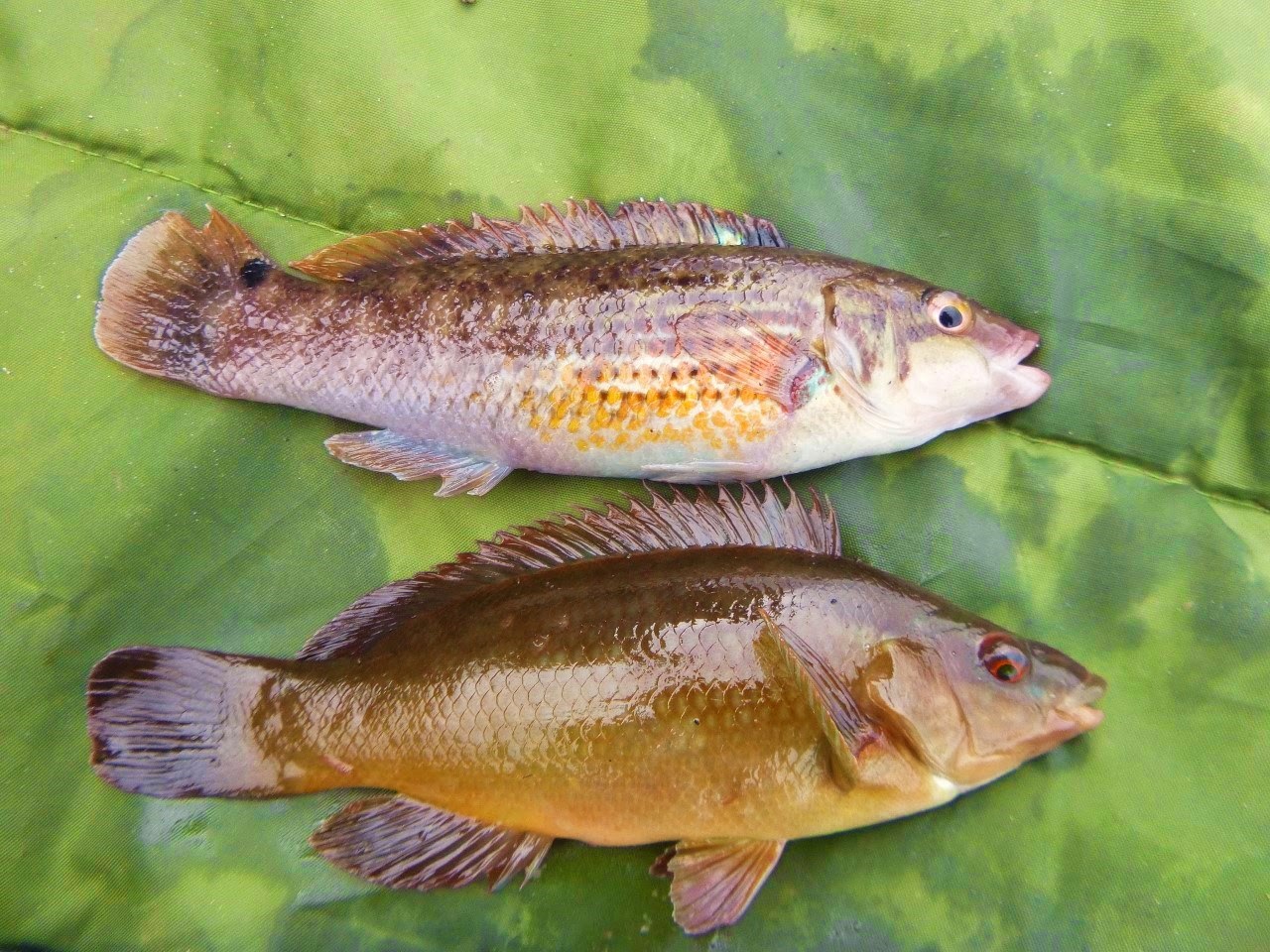 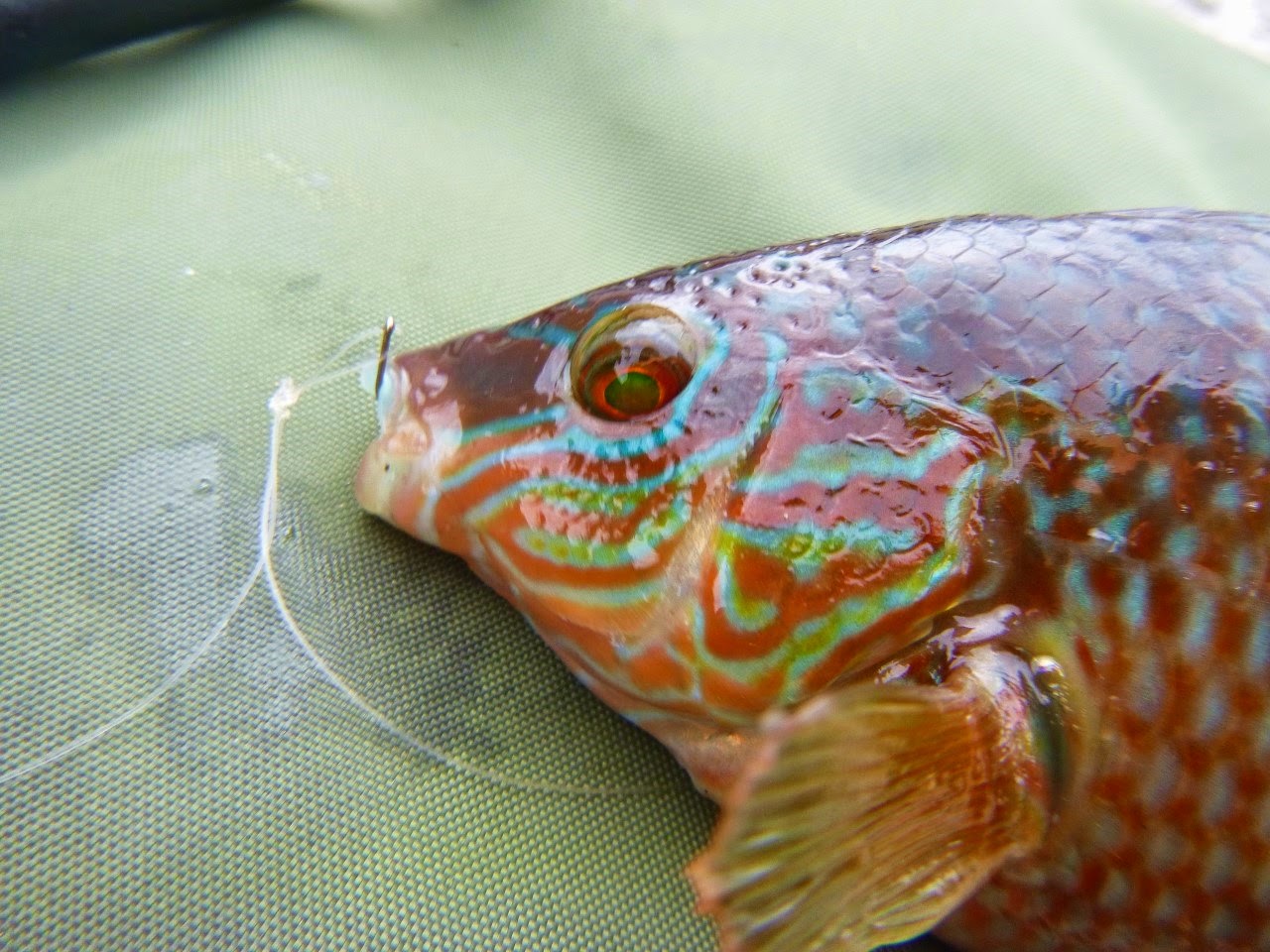 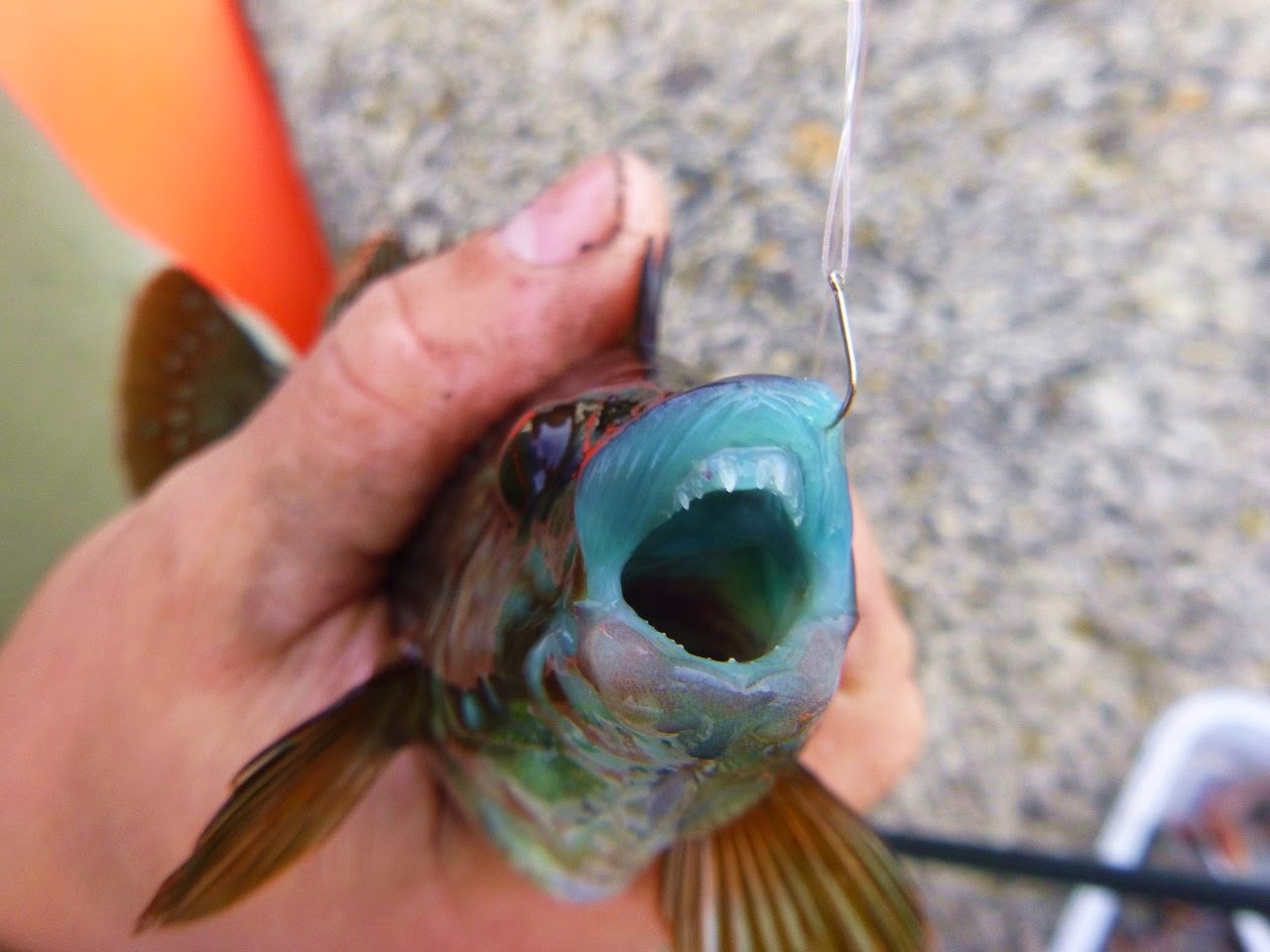 on the light gear even the little wrasse put up a scrap, every now and then a bigger one would come along, and most of the time they won the fight, you really have to keep them out of the snags to have any chance of landing them. 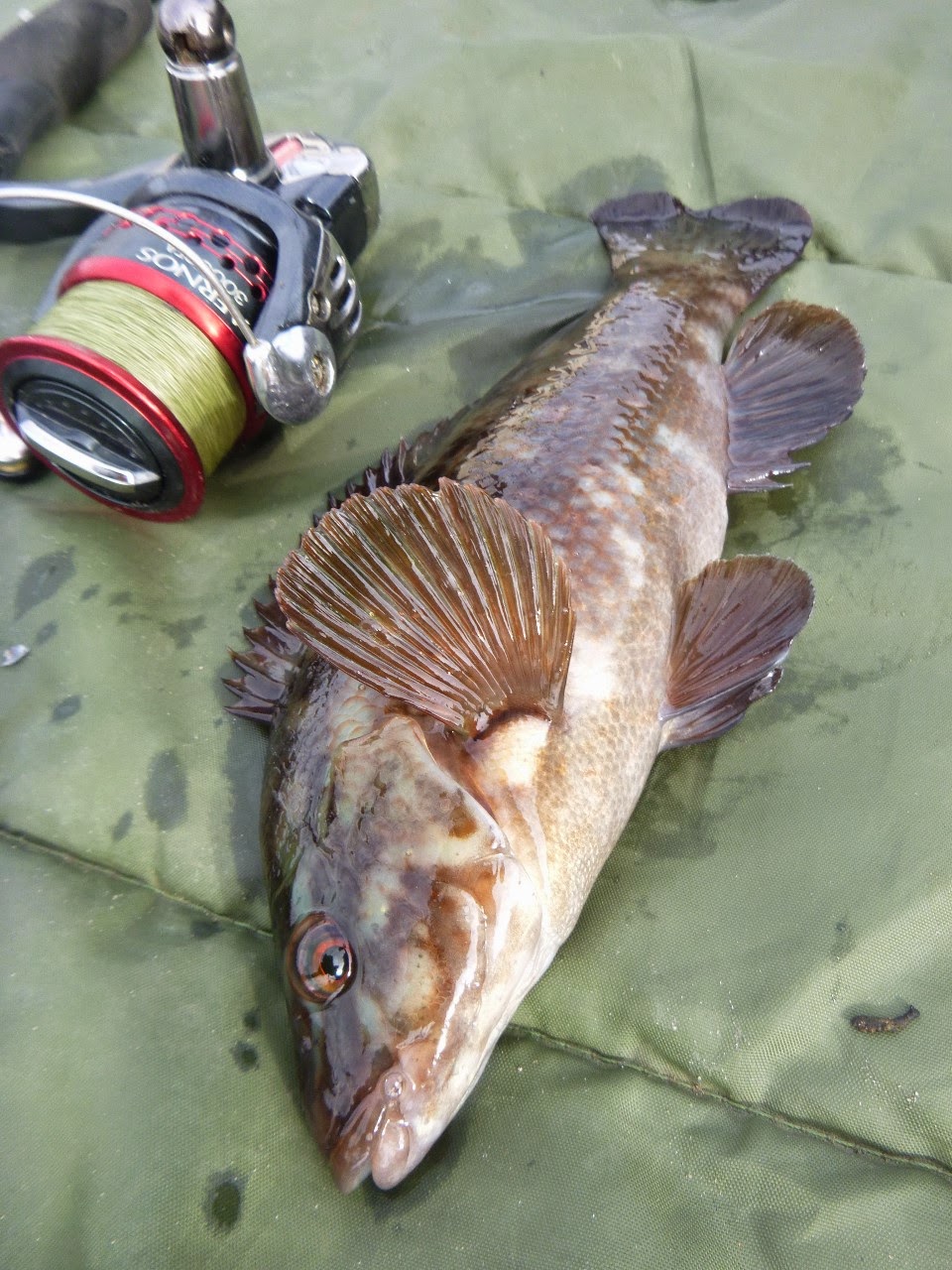 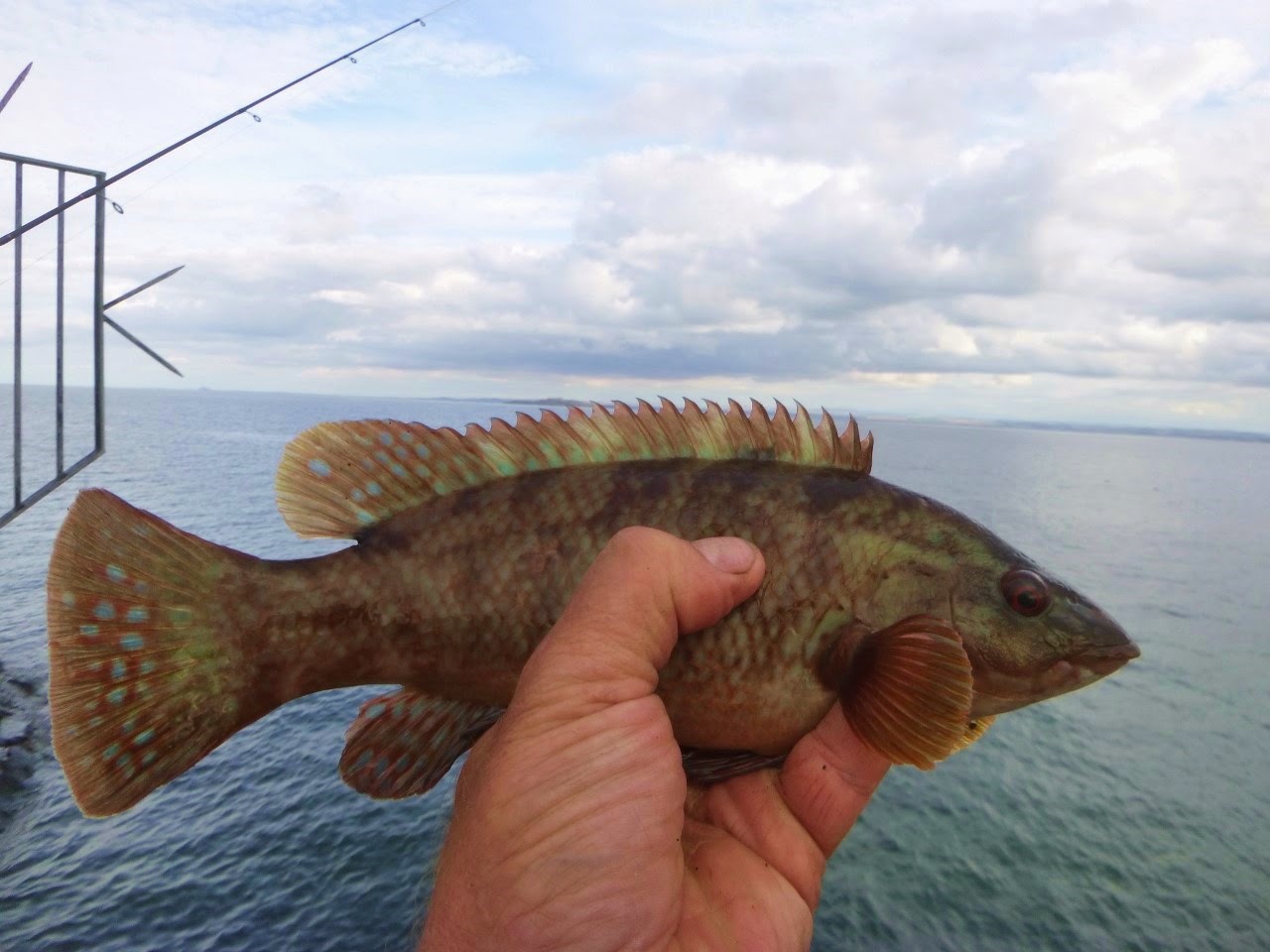 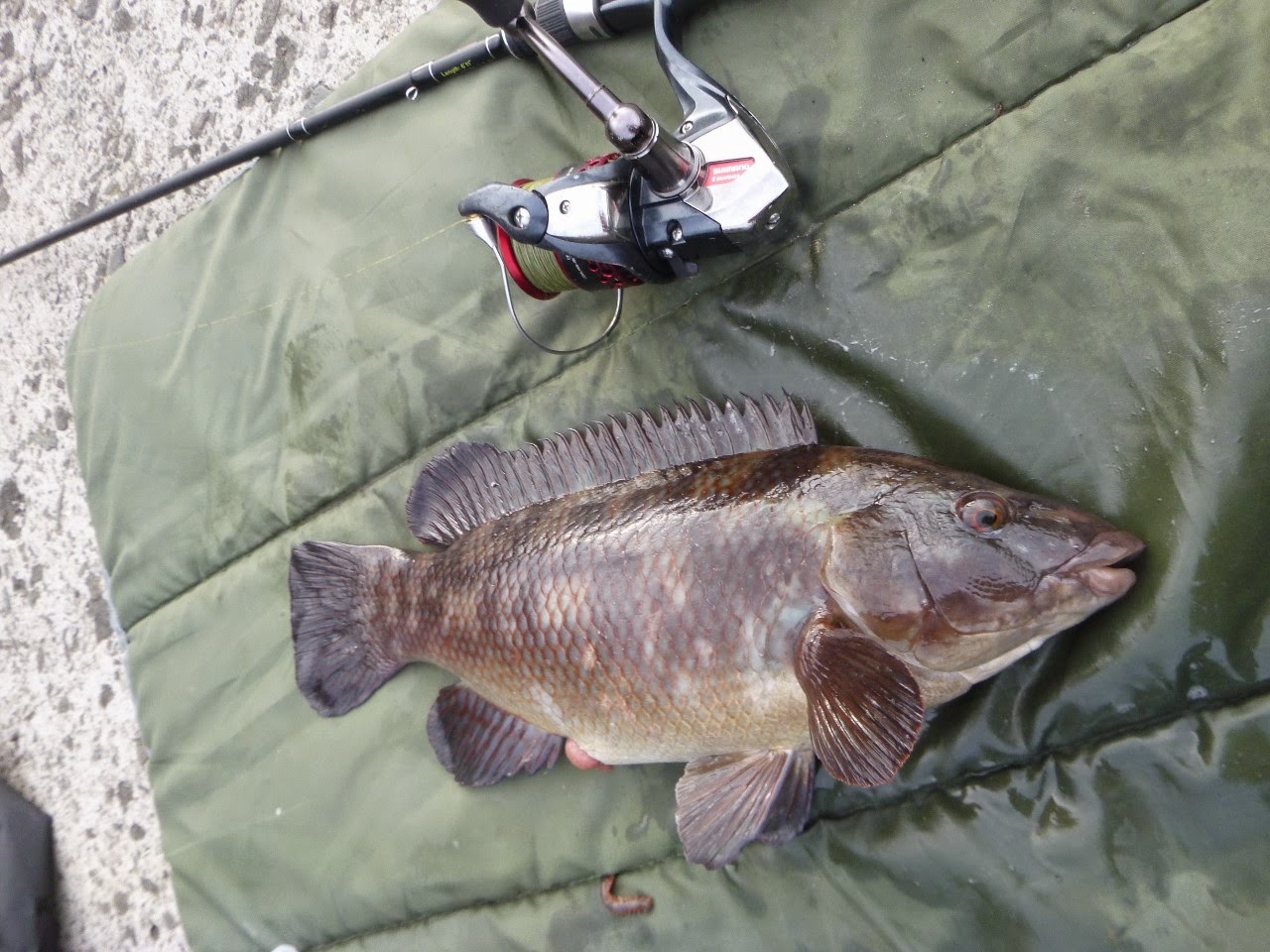 at the back of five we had to leave to catch the train home, i can see why Col's been so addicted  to fishing for them this summer, brilliant fun on the light gear. 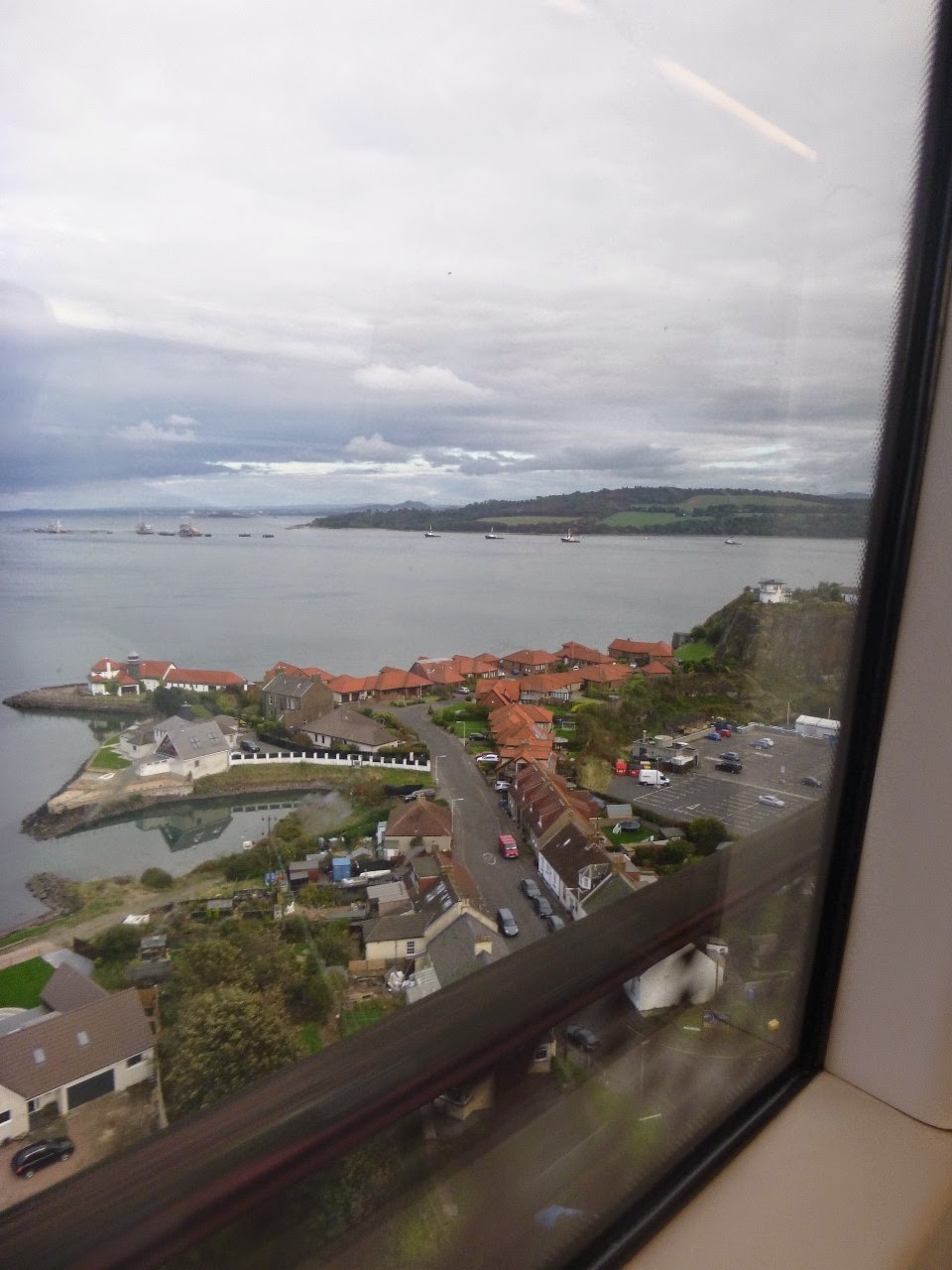 Another bash at the wrasse

The tide times looked good so i headed for Burntisland for another go at the wrasse  . At lowtide i first dug some lug and even managed a few king rag. With the bait dug plus some prawn and of course the power-isome and gulp  sandworms i set of for a bit dropshotting. At first bites were hard to come by the sea was  a bit green looking  for my liking and i wondered if the lack of clarity was a factor. Before long i hit into a wrasse but i just couldnt stop him and and he broke me, Think it was a good one .

A few nice ones followed though all the way up to high tide on small sections of lug and rag , the prawn only seemed to get the interest of the odd sea scorpion . 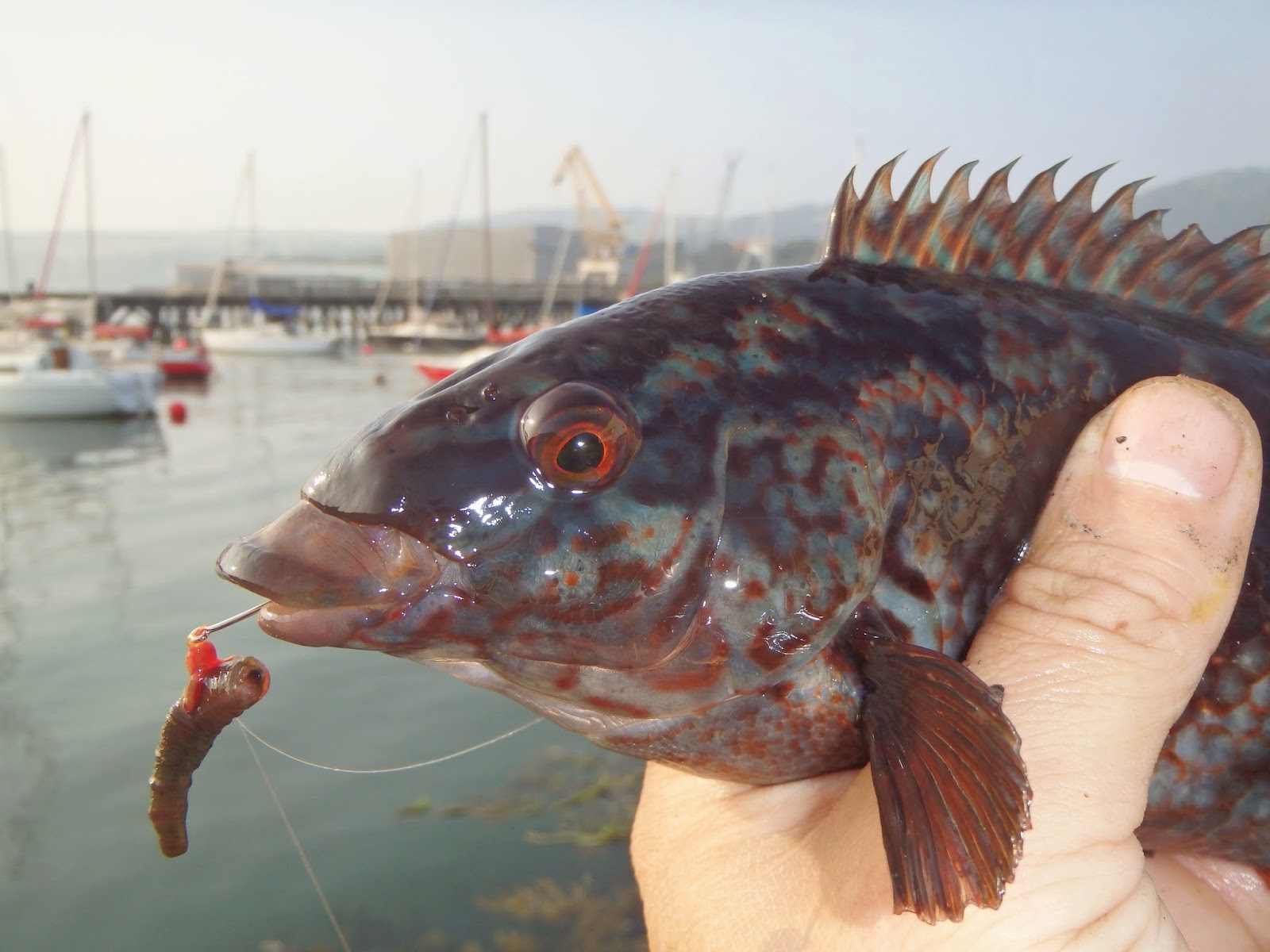 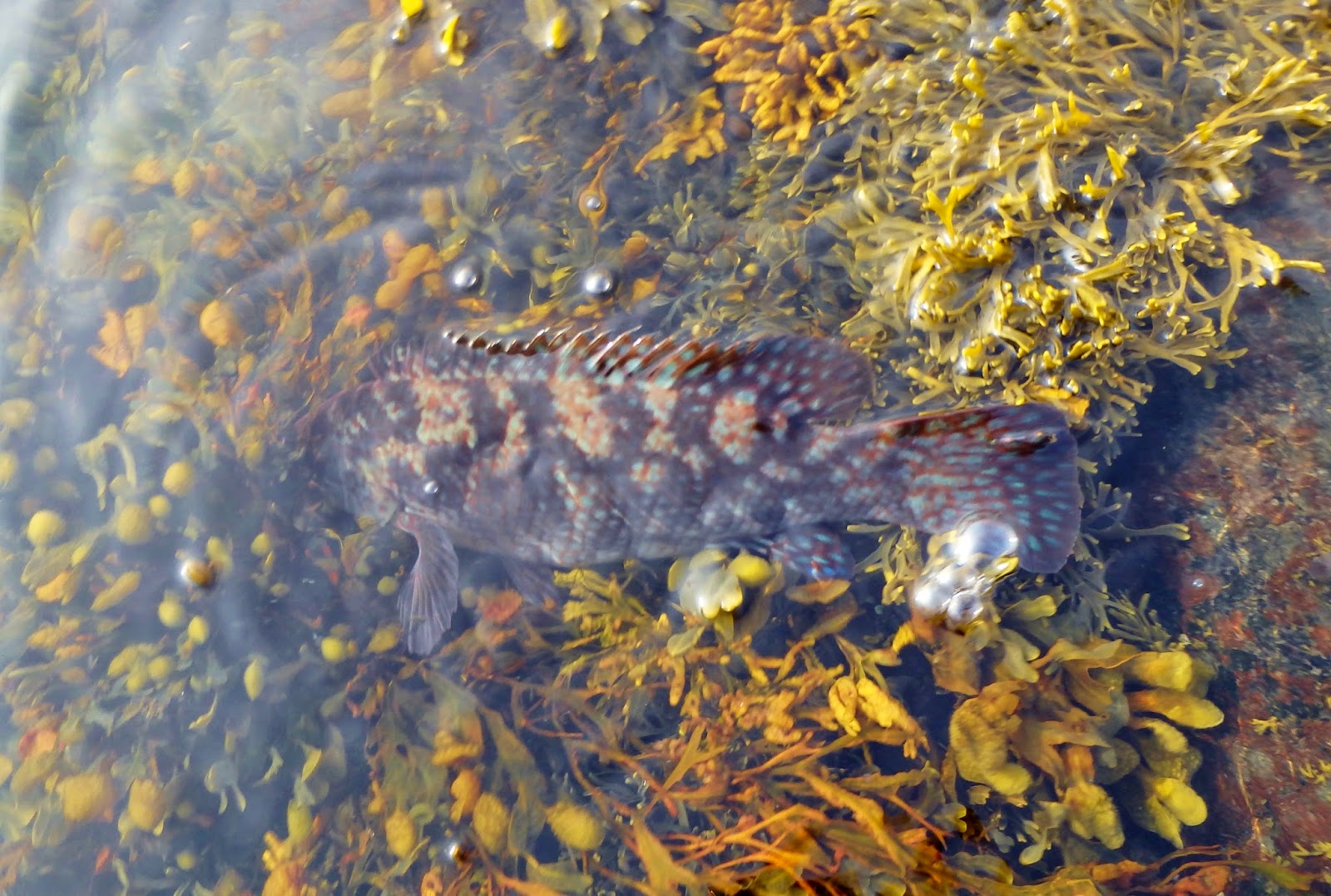 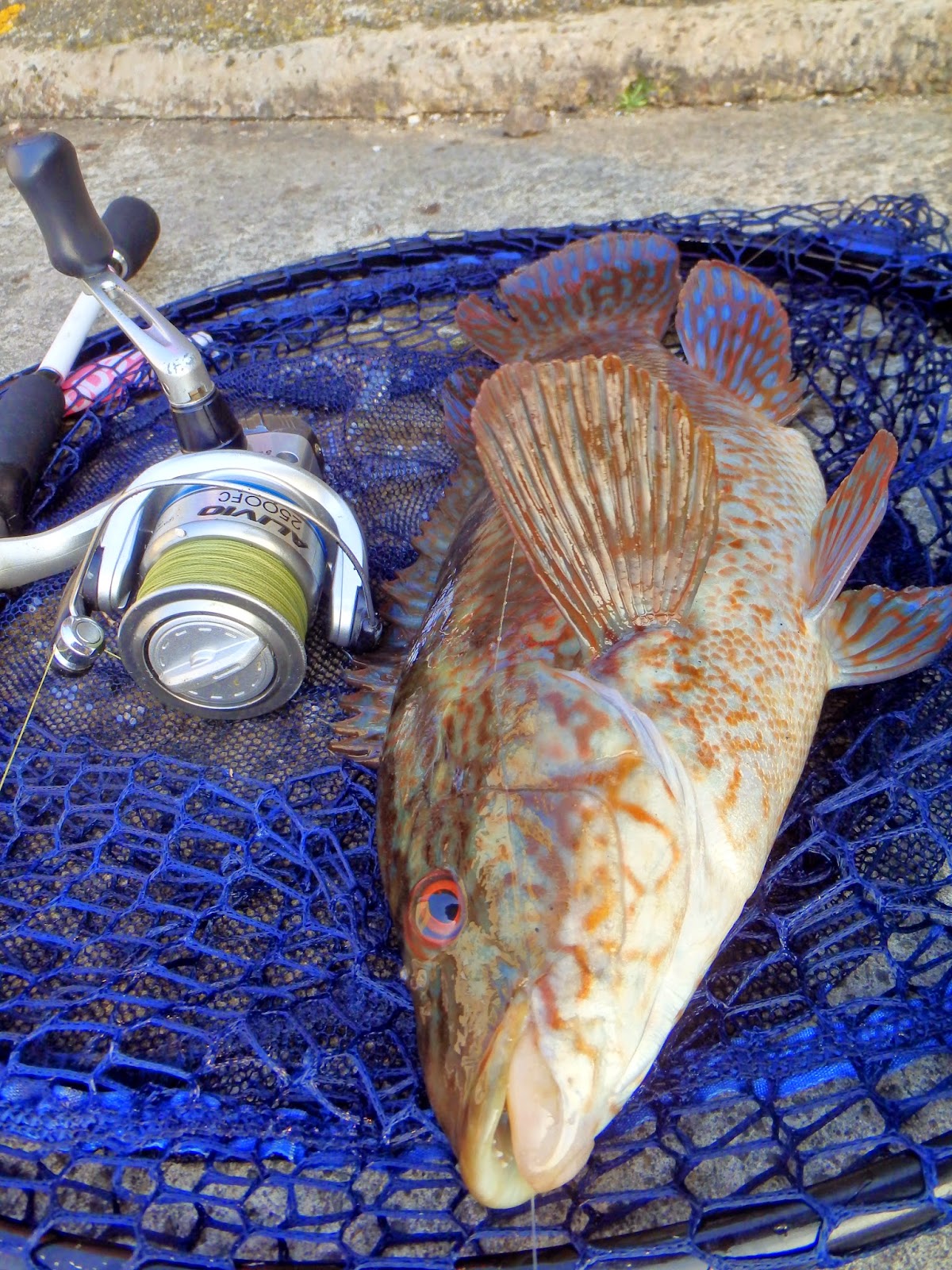 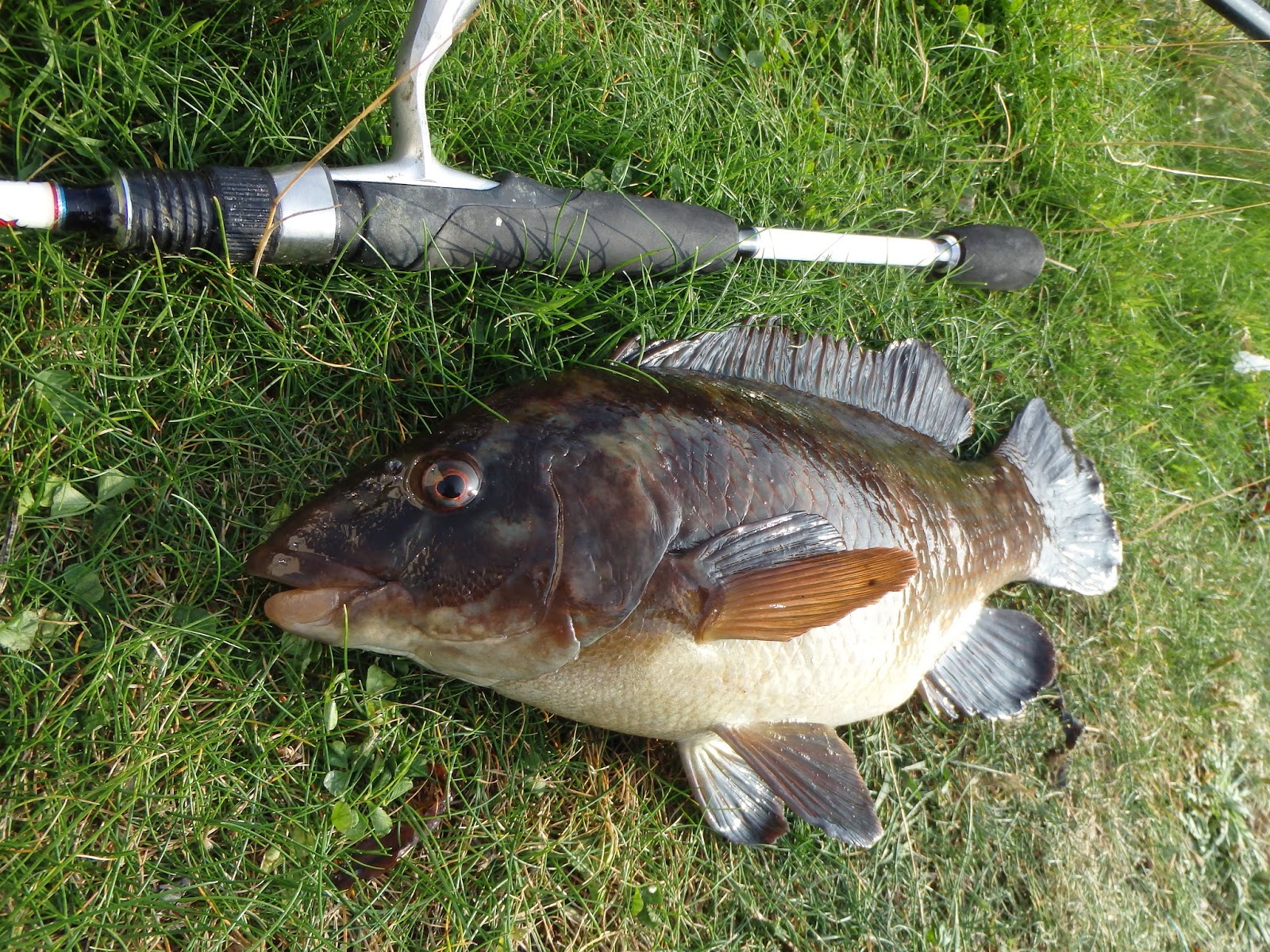 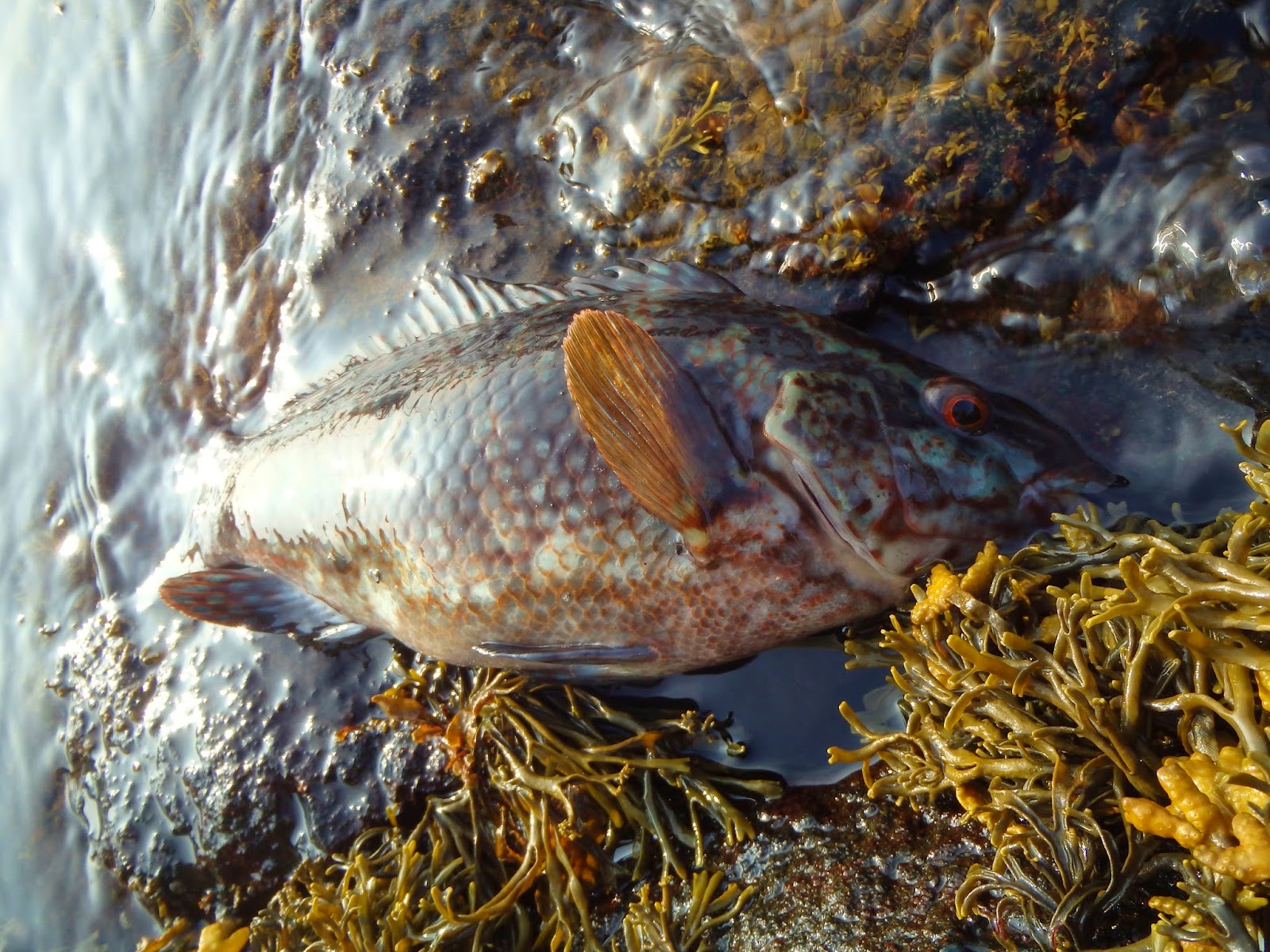 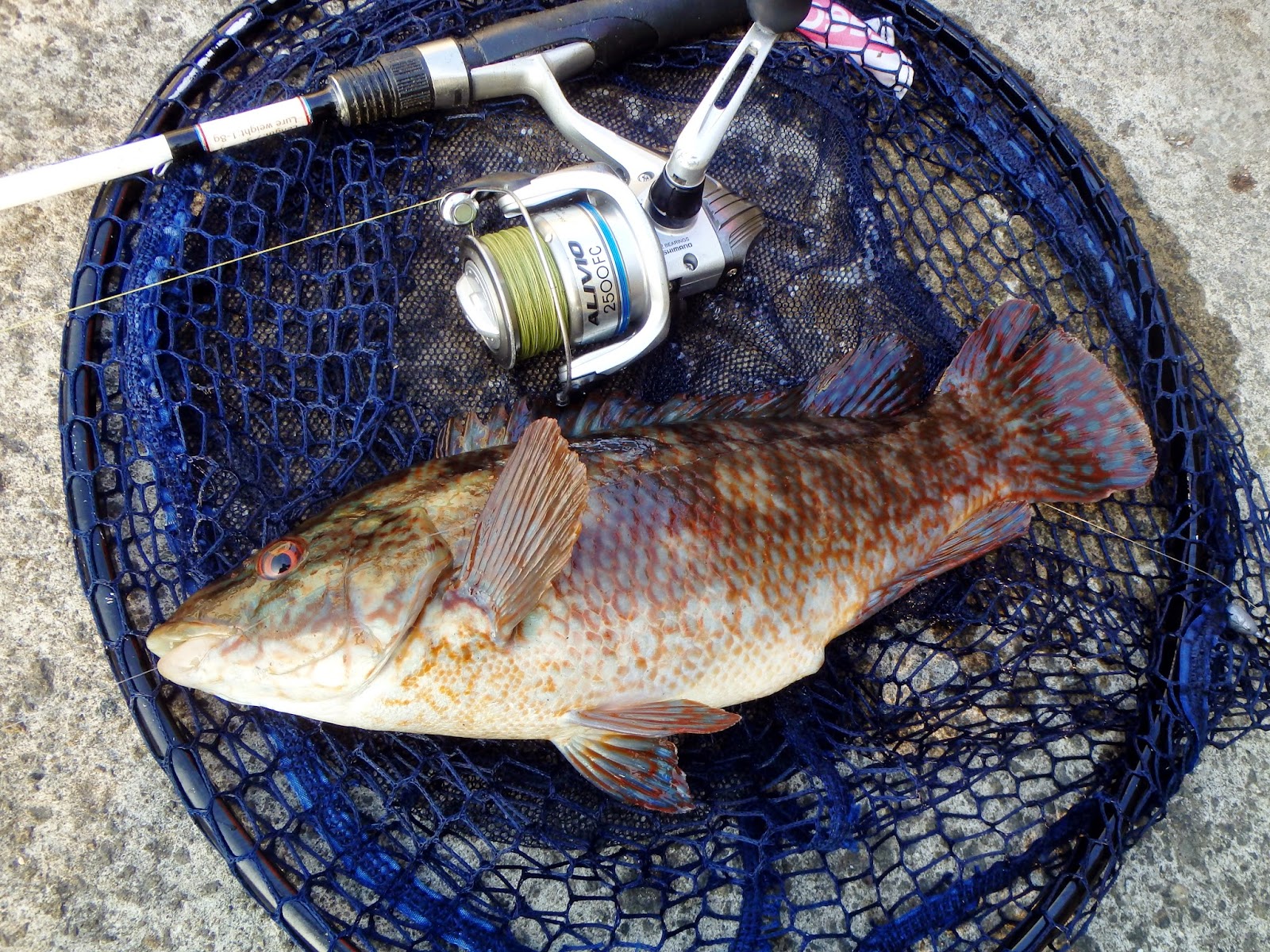 My wee shimano alivio reel is playing up a bit , so a new  Aernos is in the post.  On this occasion the goldsinnys didnt show, though they have on previous trips . 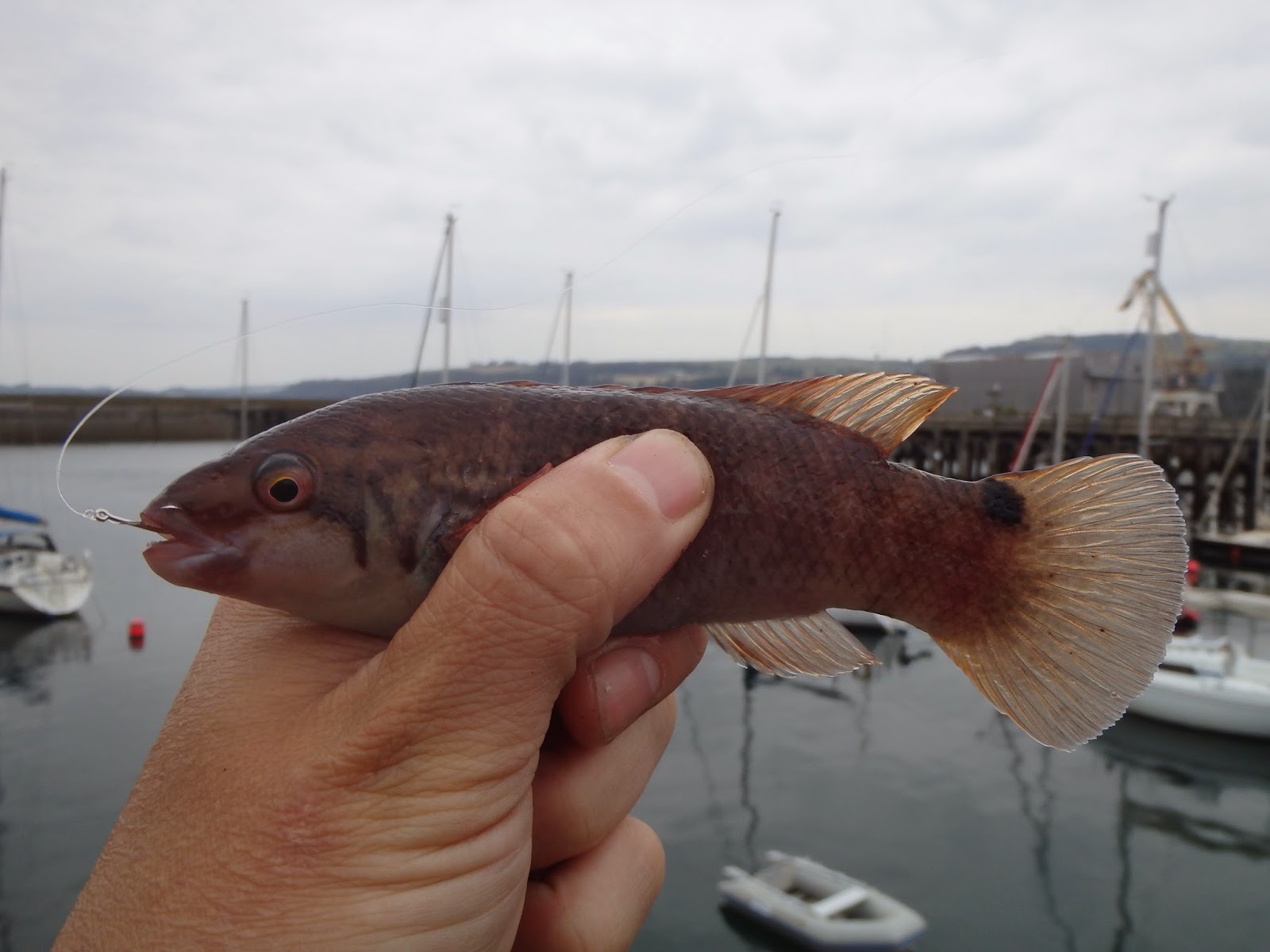 and there has been a oddity or two as well including this wee fellae which i think is a Yarrel's blenny?

After being tormented by a shoal of Mullet down at Torness last weekend  i was all set to have another try for them on Saturday morning, i had a couple of loafs and some sardines ready to go but was forgetting Ruth had to work in the morning so it would have to be a bit of trout fishing in the afternoon instead. I noticed that my fly boxes were getting fairly depleted on my last trip out so I dug my fly tying stuff out of the cupboard to tie up one or two wire nymphs and a few smut patterns, I'm ashamed to say that my fly tying stuff is all over the place, I'm needing to get it tided up so materials are easier to find! 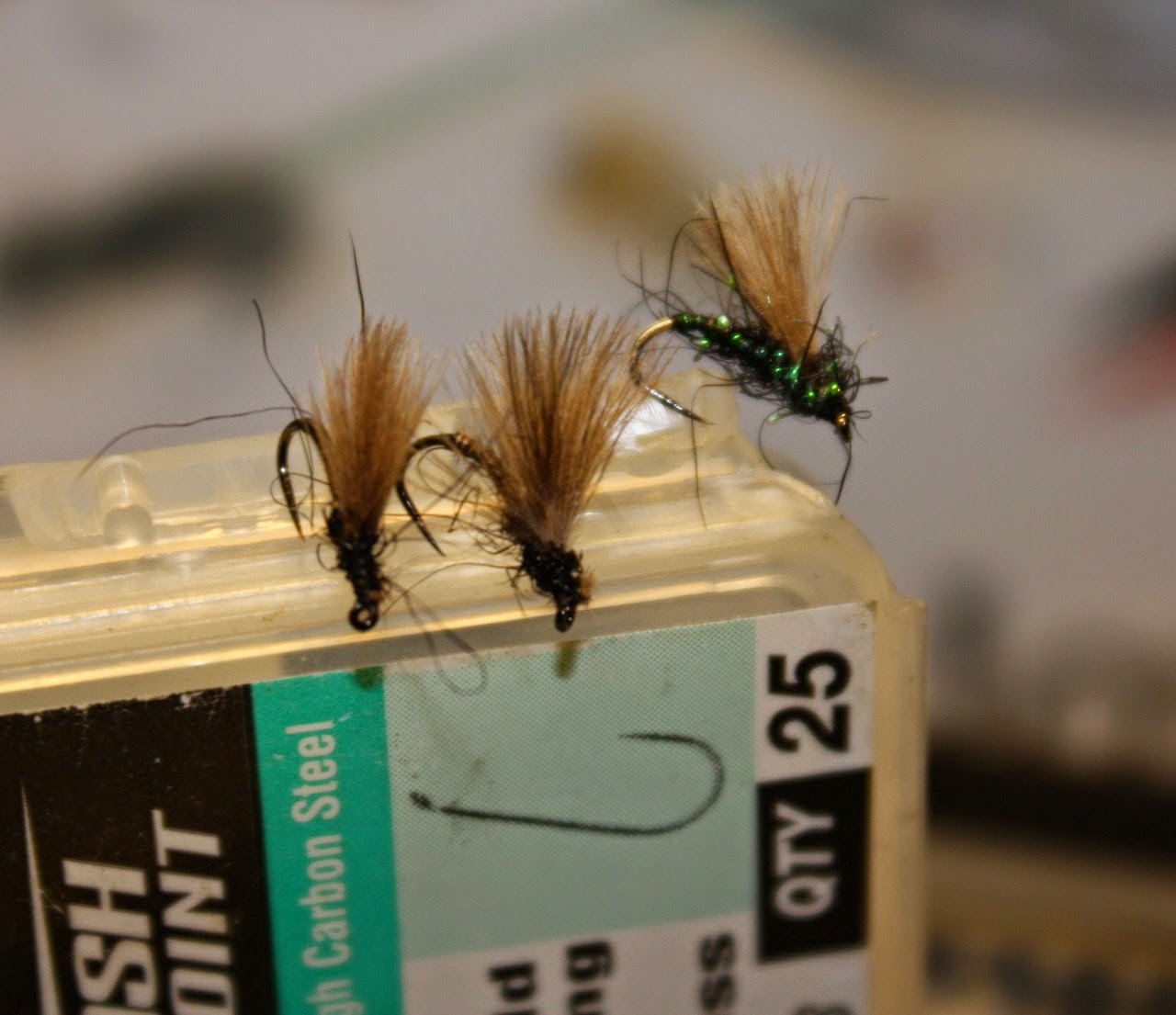 So in the afternoon I decided to nip through to the Clyde, I walked downstream a good distance from the car to a big pool that I  last fished in the springtime, stopping at one or two familiar pools on the way, I rose a couple from these pools but didn't waste to much time as I thought I would have time to fish them on the way back up.


Once I was down at the big pool I was encouraged to see a few risers and quickly took a trout of a pound on the nymph,  a change over to a smut pattern to cover a tiny dimple rise of what I assumed was a grayling turned out to be a good  trout which wasn't happy at all about being hooked, going airborne when I struck. 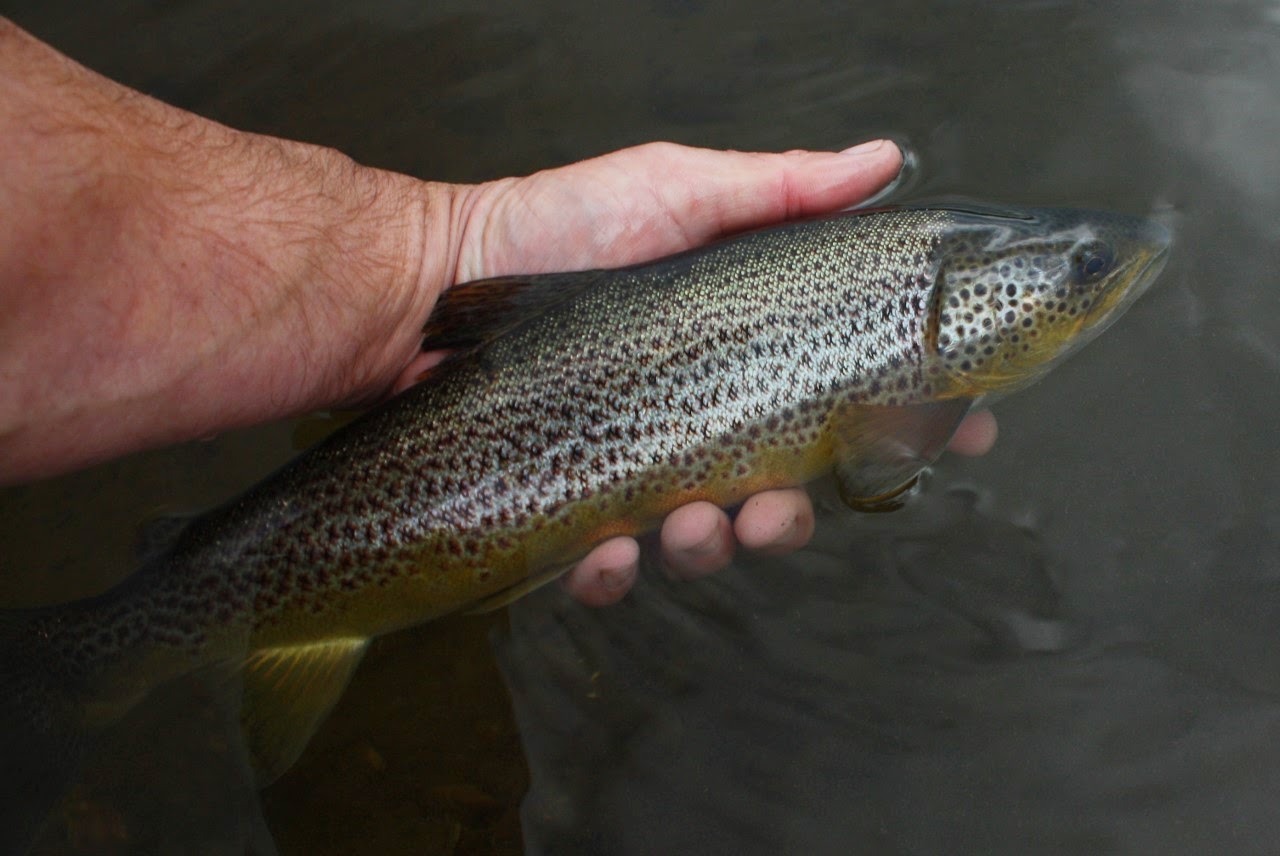 A switch over to the nymph again to fish the head brought another pounder before I made my way upstream again, I covered a few risers unsuccessfully on the way back  to the car but with time getting on was happy enough with my three trout for the afternoon. 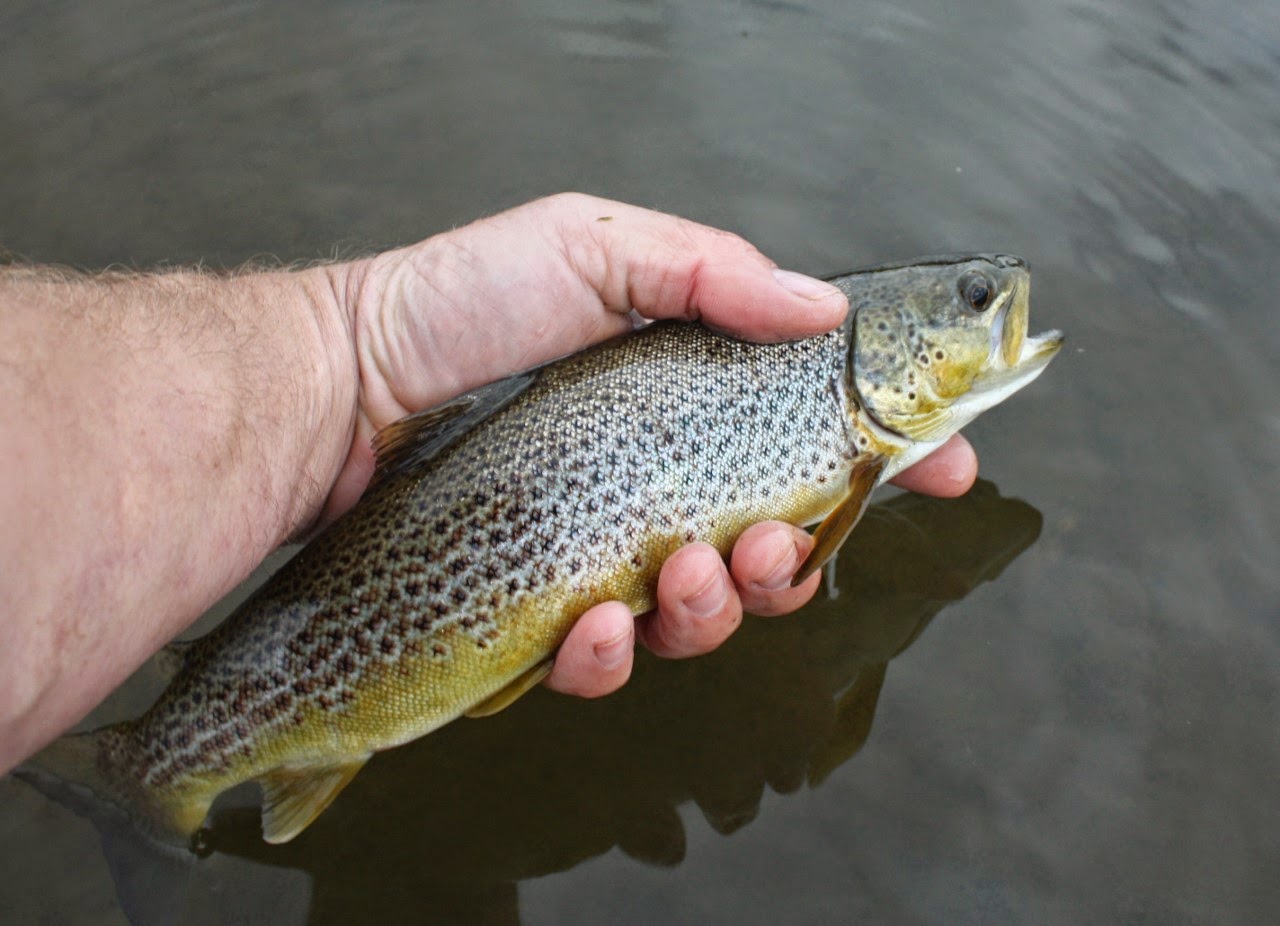 Sunday afternoon I managed to get out again, this time I stayed local and fished one of the burns which was a little on the low side for my liking. 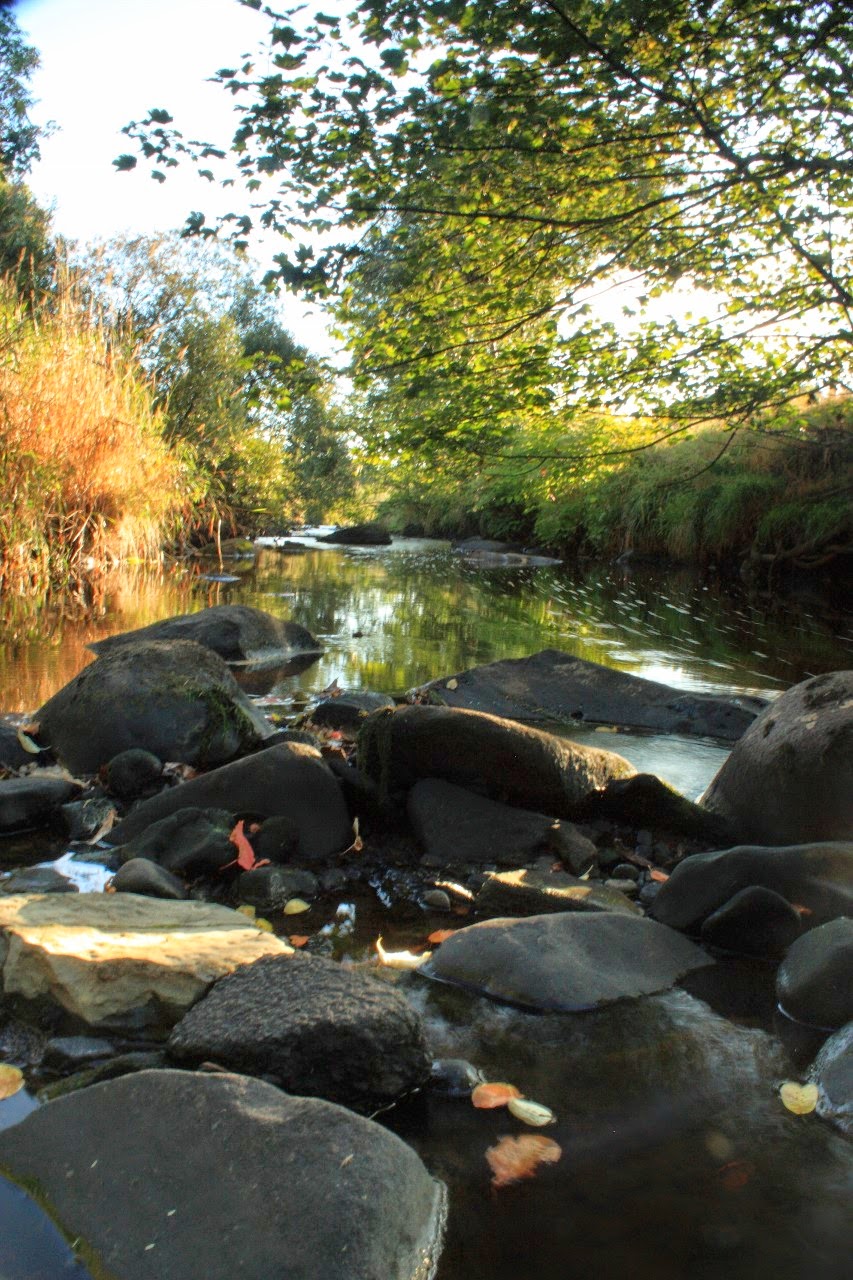 the fishing wasn't easy but switching between the klink/nymph duo for the faster water and smut patterns for any risers brought me one or two nice trout and a few fish lost.


i was being watched! 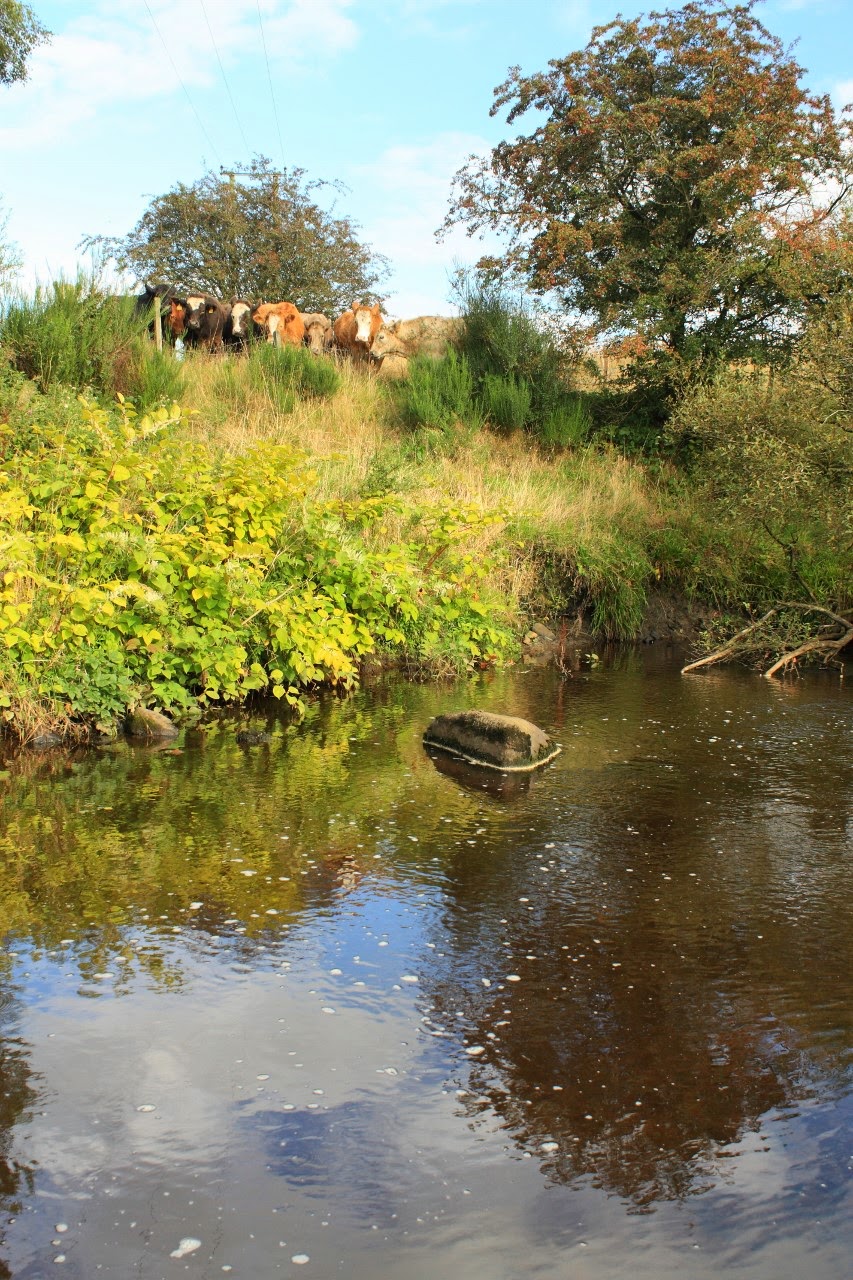 its supposed  to be another dry week so it doesn't look like the rivers are going to get a top up any time soon, main goal this week is to get my fly tying stuff into some kind of order, i might have a go for the mullet again next weekend if the weather and tides are suitable but if not i'll be just as happy on a river bank.

An Afternoon In the Jungle!

Fished one our local the river Almond yesterday Afternoon  . The water looked in great fettle with a tinge of peat . Not  much in the way of risers to start with, so i went NZ style  , fishing was slow , compared with usual but i started to pick up the odd wee trout. Before long  I started to see the odd smutting riser, but they were no pushovers , had to go fine and smaller, then i started getting a response to these choosy , spooky smutting trout. The best of the day looked a dead ringer for a trout from the Clyde, here she is. 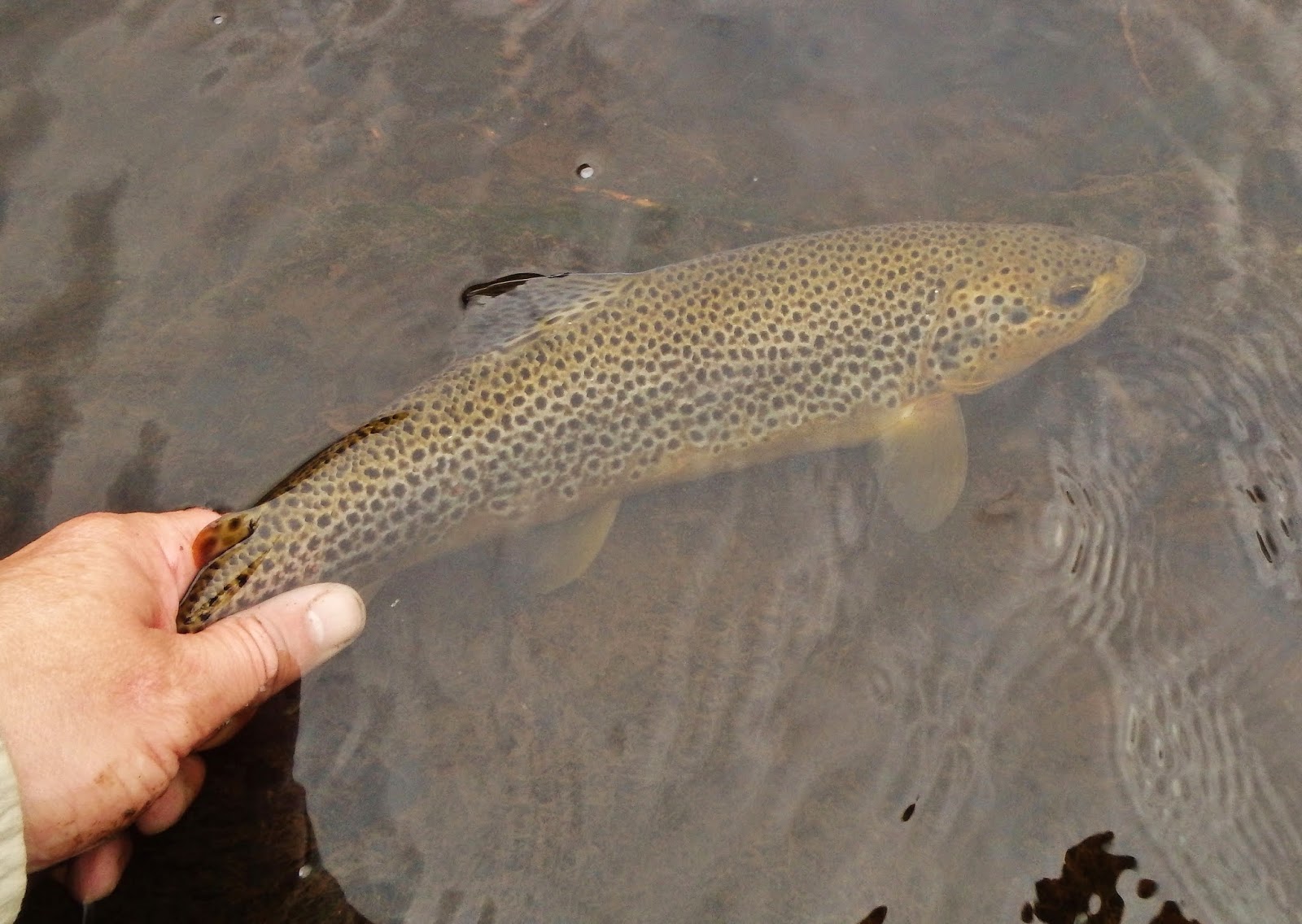 The banks are a real jungle and are  tough going , hopefully the vegetation will die back a bit before the backend.
Posted by Col at 18:43 2 comments: