On my hols to the Yorkshire dales. Not a fishing holiday as such , though i did manage to steal a few hours most days.We arrived in the Dales  On Saturday when we arrived we just got our bearings walking along the Village of Ingleton which we were staying in which sit by the river Doe and Twiss  and at Ingleton Viaduct where they join they become the River Greta. these are not rivers you find in every Dales fishing guide , like the Ure , Wharfe , etc, this chain of rivers are known for other reasons probably most for there waterfalls. I got my permit on Sunday , £25 for the week and got my rod licence on Monday a further £10. I did though fish on the Sunday lincenseless. But before that i did a wee trip with my son to White scar caves , very interesting and gives you a idea of the local geology, which is mainly carboniferous limestone over a layer of slate, good news for the fly fisher. 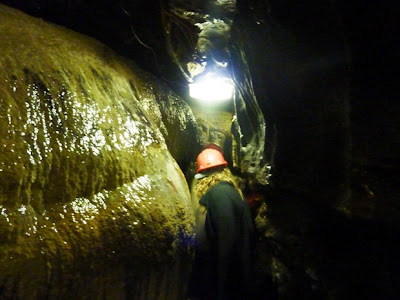 The rivers were still fining down from a recent thunderstorm , but they were fishable , the water carrying a peat stain, i couldn't wait and fished the stretch of the river Doe, in which the cottage overlooks, catching some fine brightly coloured trout up to the pound , i was surprised to see such fine fish  from a wee river. 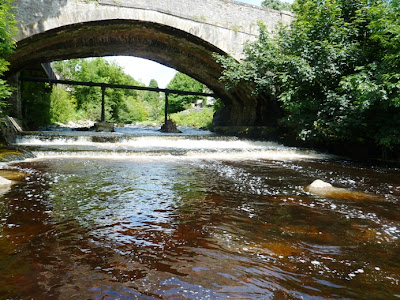 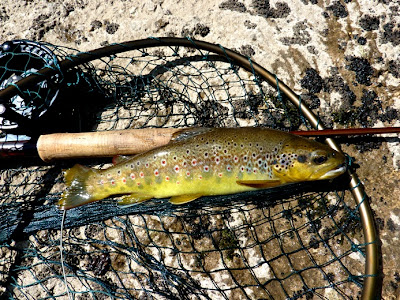 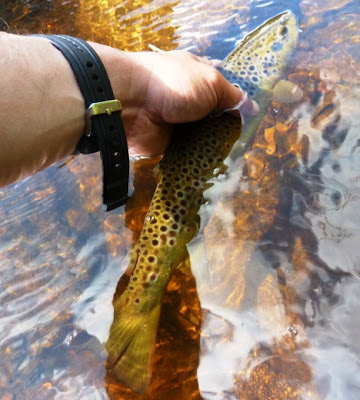 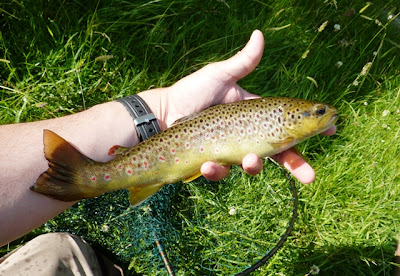 I returned for tea, then at 9pm grabbed the wee 6ft6" rod and sampled the Twiss, i took a fish , on a klink, 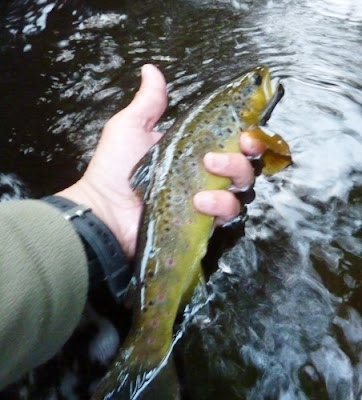 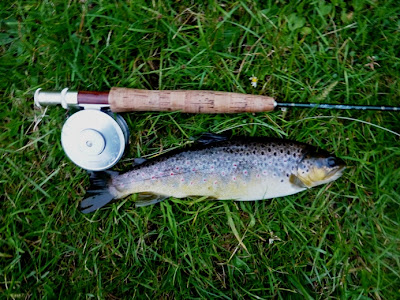 then a few more on a huge G&h sedge , then headed over to my new favourite pool on the Doe , where i hooked this  fatty. And that was my first day fishing on my hols.


The next day we did the waterfalls walk a great way to see the rivers. First we walked along the Twiss viewing some of its many falls.

The most impressive and famous of all is Thornton force. 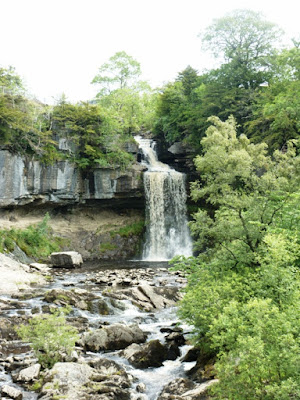 The next few are on the Doe, the top one is Beezley falls, where in the photo below you also just see the Triple spout in the foreground.
After the walk i managed a few hours on the Greta.
Walked downstream and managed a few fish on a mixture of nymphs and size 12  klinks. 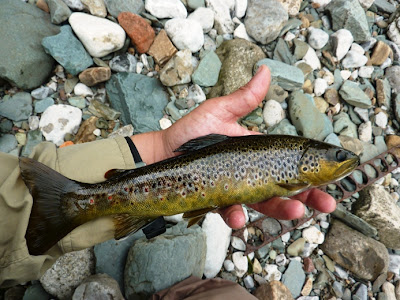 I lost one weighty fish at a salmon ladder which snapped me(5lb trippet) , i didn't see him though and it could have been the way i struck?

Next day saw us visit Hawes, a colder day, but still dry, on the way i couldn't help but notice the difference in character of the upper Doe above Beezley falls  . Here the river was less rocky meandering through a meadow in a valley between the scars. 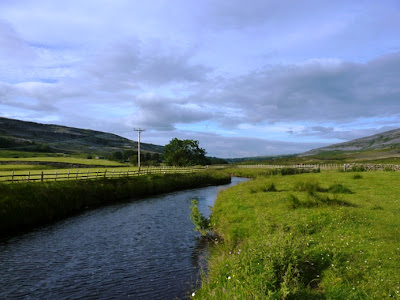 So it was here i sampled that evening. 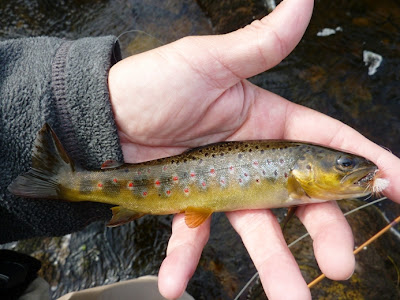 The trout were numerous , feisty but the biggest perhaps only made 3/4lb , but gone were the salmon parr of the lower water. A great place to spend a few hours.
On Wednesday i went to Blackpool for a treat for my son and after a day on the Pepsi Max, i decided for a few casts on the Twiss and Doe, fishing wasn't great, in fact i started on the Twiss and after a few wee fish decided to head for the Doe,( the midges were terrible on the Twiss ) , but it wasnt much better in the low water, the best fish being a 3/4lber in the dying light on a g and h sedge).

On Thursday i took the dog for a walk down the Greta and in the distance i spied a nice looking pool, so later i decided to start from there. I'd decided to fine down too 7x and try smaller patterns today so put on a size 14 olive klink  . Taking a few wee browns (and salmon parr) from the pool below the pool i planned to start at i now found myself on the pool, made a cast into the bubble line a fish took and lifted in to him and he swam upstream then to the other bank, this was a hefty fish  i felt things were going well  , then for no apparent reason the line went limp, no curly tail , i reckon the fish bit through the line. A big sigh followed! 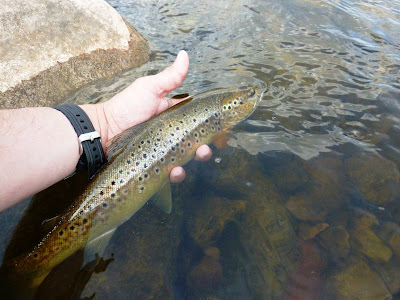 I then continued and hooked another good fish , at 1 1/4lb , a small consolation. But all of a sudden the boundaries had moved , this water had some good fish, maybe something to do with the limestone?

I lost another fish , not big but that's when i decided too beef up on the tippet. So back with the 5x and it wasn't a minute too soon as i approached a smashing looking pool and first cast a nice trout took the klink , leaping around the pool, and luckily i brought this one to the net, a shade over 2lb, beautifully marked! 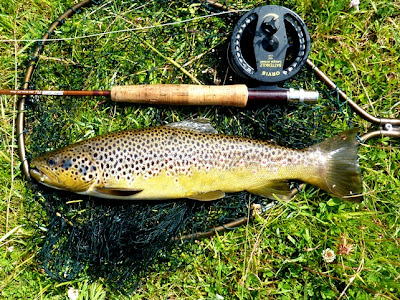 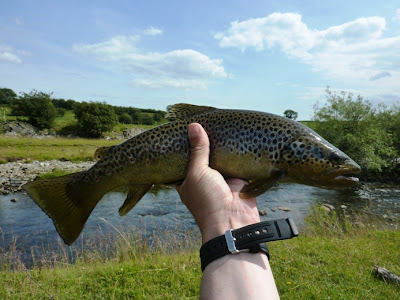 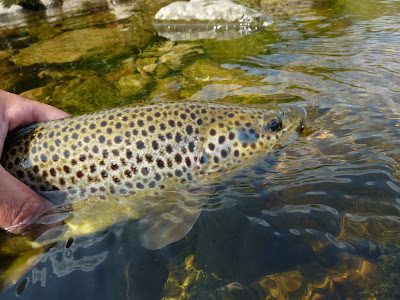 This was my fish of the trip. i was delighted, but was still left wondering what I'd lost in "That pool".

The next day i could not help myself but try and replicate the previous, but landing them . A few nicely coloured trout including this almost  "Zebre" trout, but the big trout proved elusive. That concluded all the fishing on my Holiday to the Dales, on the whole i was most impressed by the Dales not just it's fishing but it's beauty , and it's people, i never saw another angler all the time i was there.
Posted by Col at 23:55 5 comments: