On the way to the river today the temperature was only reading 6 in the car, hardly warm! and an east wind to go with it. On arrival we spotted another angler making his way upstream so we headed in the oppisite direction to the bottom of the stretch and sat and watched the river for a while. A sporadic hatch seemed to be under way already but there wasn't much in the way of risers, eventualy Col spotted a couple of fish to go for towards the tail of the pool, they seemed to be moving about a fair bit and feeding in short bursts, cut a long story short Col missed the first and i missed the second, never mind, can't win them all!
We made our way upstream looking for risers and nearly walked past the next fish which was going good style in a pool that i got a fish from a couple of weeks back, he was intercepting everything from a couple of close by bubble lanes. Col manovered himself carefully into position below the fish in order avoid drag and was ready to pounce on his next rise, the fish did rise but comicly Col had managed to catch the klinkhammer to one of his wading boots and had to sort himself out first! not to worry i could see from my vantage point that the trout was still rising away quite the thing' Col got his klink over him this time and all hell broke loose,  clearly this wasn't an average trout like what we thought it was!


Naturaly Col was keen to get him in the net but this fella wasn't going to give up without a fight and it seemed to take an age before i eventualy managed to slip the net under him, no pressure! 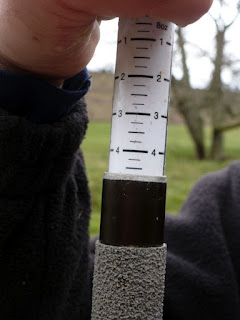 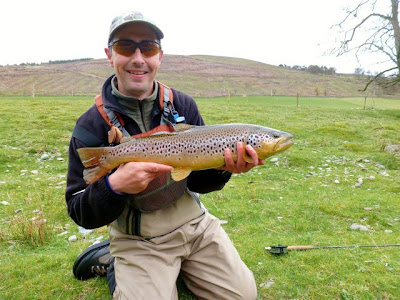 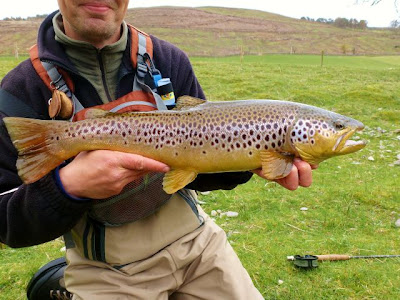 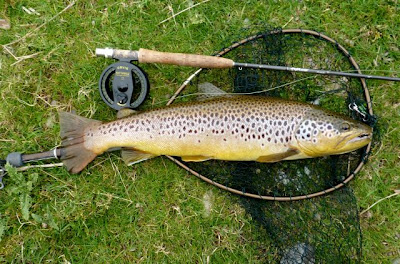 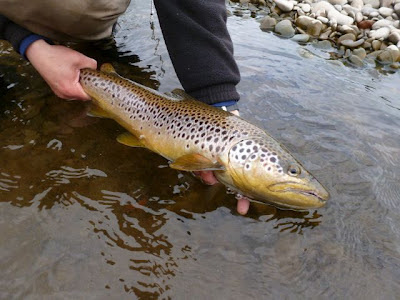 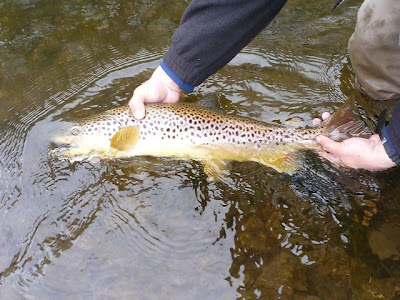 what a magnificent trout

we failed to find anymore steady risers after that, not helped by making the mistake of fishing miles of river only to disvover that it had already seen another couple of anglers. But in truth it didn't matter anyway, Col had  caught the fish of the day and most probably the season too! ﻿
Posted by brian at 22:14 11 comments: