The last day of our holiday. The weather generally hadn't been kind , strong winds and occasional showers was the pattern, however , there was places for shelter , by digging out the OS maps you could find there was always a sheltered outcrop worth a go, not perhaps prime areas but i found they offered good sport.

We were bound for Portree for a bit souvenir shopping so me and Lewis got the LRF rods out and had a go, we caught the usual suspects, coal fish, wee pollack , wee cod and I added another new species, a  poor cod . 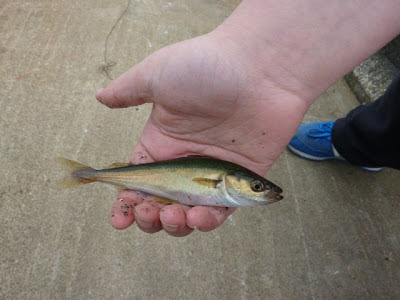 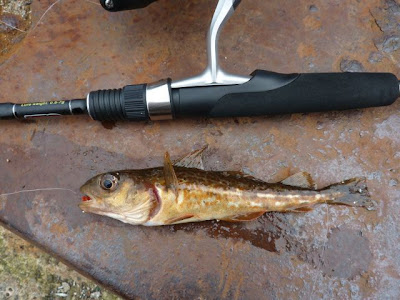 Later I went back for round two at Greshornish point. It was wild though , I thought it would be sheltered as it was on the Sunday evening as I thought the winds were in the same direction, but no, guess I picked he wrong mark. 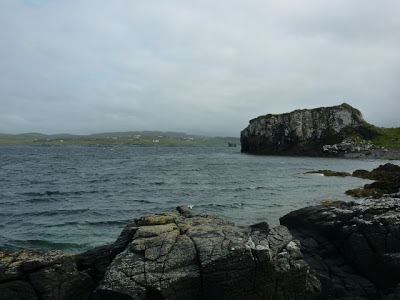 I took the light spinning rod and the fly rod but only used the latter for the two hours I was there. First I tried my intermediate but found despite counting down for a minute it just wasn't getting down , where I wanted it quick enough in the blustery conditions, so I put on my repaired fast sinker, I'd repaired it with. Section of braided loop some thread whip and superglue, and started picking up pollack, i had half a dozen, a few really wee ones and a few marginally better ones not as big as the loch pooltiel fish but still great sport. 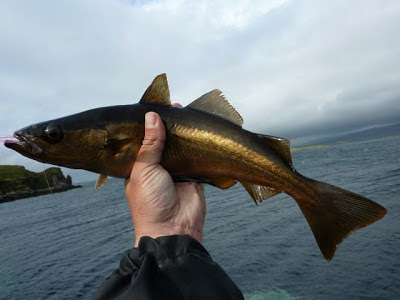 Doing the simple things though was difficult with the wind even standing up was difficult at times, and the running line had a habit of blowing out the line tray and tangling. I finished with this modest but beutifully coloured Greshornish pollack, a fitting end to my time fishing on the island. 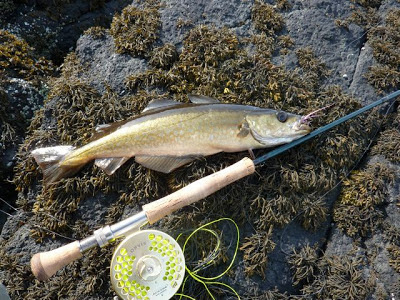 It was a great holiday, it's a sea fishers heaven, some species such as mackeral were still thin on the ground, as the have been everywhere so far this year, but there was plenty pollack to keep interest, if I had more time , I'd probably give the beach rods a go, or go more out for wrasse than  my occasional efforts .  I'd love to go back to Skye in the near future , but think the misses will be wanting a trip to sunnier climes next year, still I live in hope.

On Thursday we had a trip to the reptile house in Broadford, then on the way home stopped for an hour and a half at Ardmore point, the wind was blowing hard , the mission was to get Lewis a pollack.

I decided to leave the fly gear at home and concentrate mainly on getting lewis a fish , so we were both spinning  with newly purchased big rubber eels from dunvegan tackle shop , lost most of them , I hooked fish and Lewis played it in , a nice wee pollack ....yes. 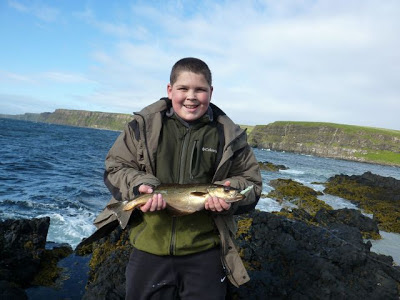 Between  snags he then hooked a fish ,a lovely fish it was too. 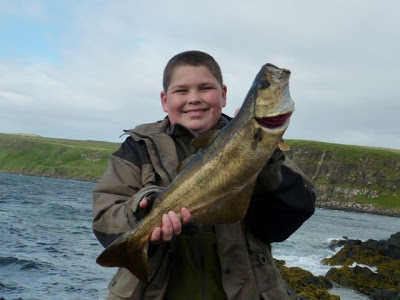 Understandably he was over the moon. I then took a small pollack before we headed for home with a few fishy tales to tell. Mission accomplished and one happy angler!
Posted by Col at 17:57 3 comments: