Its Spring , but not as we know it

There had been yet another fall of snow last night , not as much as the night before but enough for concern. The sun though did its magic and  it thawed quite quickly .3 degrees today at its warmest point not warm but i was feeling fairly confident i would catch after seeing a riser yesterday in a blizzard. I had a lot of nasty jobs to deal with so didn't get down the river until 2:30pm. 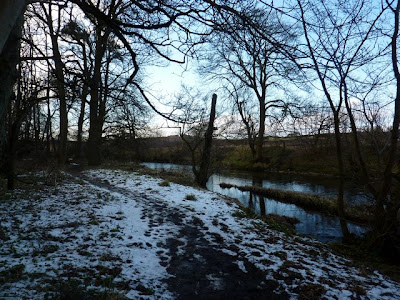 I set up quickly with a fresh 9ft  tapered leader  , attached to that went 4 feet of rio powerflex , and my chosen fly a size 12 brown biot klink.

The river looked great,but it seemed that  i might have missed the main bought of the hatch by about 30 minutes or so as a fair number of duns  were collecting in the eddies including these. At first i put it down as a  brook dun , but now after looking at the picture  i'm convinced its a march brown. 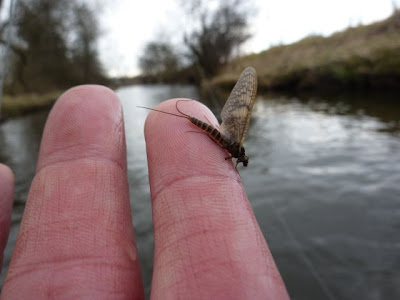 As i headed to my chosen start pool a fish rose in the pool in inches of water. At the point of spotting it i was a good distance away and could not pin point it on the featureless flat, i waited for it to rise again , but nothing stirred , another fish rose further up the pool. I covered where i thought fish "A"  rose   and on my 3rd speculative cast he took my dry, but i missed him, as i did with fish "B"  further up the pool.

On to the next big flat pool. 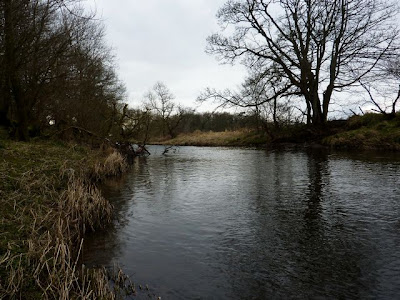 Scanning for risers i saw out the corner of my eye a fish kiss the surface in the crease made by a fallen tree  on my near bank in the picture above.
No mistakes this time as i felt resistance on the strike and after a good fight i landed a fine trout , perhaps a tad lean , but otherwise in great shape just over the pound. Despite looking at other spots i didn't come across any other visually feeding fish , the last 20 minutes "fishing the water"  proved fruitless as it often does , at this time of the year. Hopefully get out again tomorrow and try another spot.
Posted by Col at 20:49 3 comments: