Sunday 24th
The return leg to the mountain river. Unlike Thursday the water had lost a bit pace the day was bright , maybe too bright, and hot and we had a downstream breeze to contend with. We started fishing at about 1:30pm. We planned to take a fish a turn, It all started well , when Brian hooked and  lost a fish  then shortly after was into another, it went 1lb 2oz and had taken the klink . 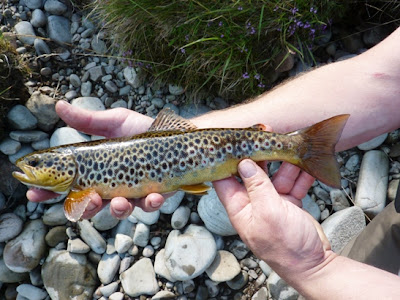 So things were looking up , my turn next , a few casts in my klink dipped and i lifted into a  fish , another fish of 1lb 2oz. 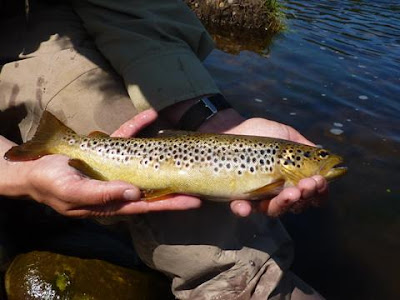 Brian then had another in the fast head on a wooly bugger . A good start to the day.


On to the next pool, it was a pool i'd done well on , on Thursday. Good presentation though was problematic with the wind, i did however get a response from what looked to be a better than normal fish, which looked or maybe even took the nymph all i saw was a yellow shape lift in the current, but i struck into fresh air . In retrospect maybe ishould not have struck at all . As in the next pool a fairly featureless one there was a riseer just above a crease in shallow water. I decided to fish the crease first , and first cast a fish seemed to swing round and  follow the flies for 5-6 yards or so downstream, both of us seen this, the reason why we seen it became apparent,  2 casts later when i hooked into a good fish, and it was big!
He was played out , and ready for netting , confidence had just started to kick in with visions of glory when for no reason the tippet broke at the nymph. we estimated the fish as a long lean  +3lb' er. I was gutted, it would have been my best fish from this river.
After that we seemed to go through a catching lull . Although there was one pool which is normally crap which Brian had about 5 , other good pools though didnt produce  it was odd , the stimulators had a swim and did manage a fish or two. By 8pm we headed home, i was a bit sore with the lost fish , but you can't complain about the quality of fish we did land. All in all it was a enjoyable day as ever in good company. 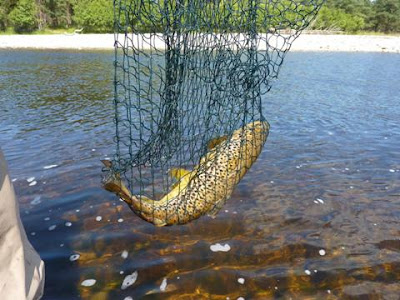 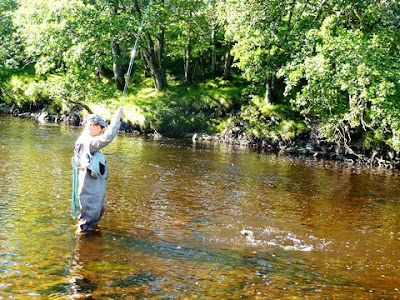