We Arrived at low tide revealing a almost lunar landscape, the flies tied during the week were tied on and we fished, remarkably after half an hour Brian hooked up and  landed the first bass  of the day! He was over the moon understandably because prior to the trip we wereboth bass virgins. 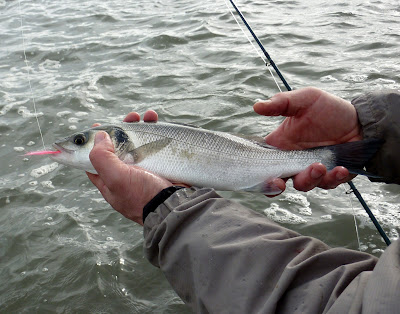 Just then Colin joined us , and he was quickly into fish after fish . His experience on fishing the salt clearly shone through.
Brian was getting in on the action too! 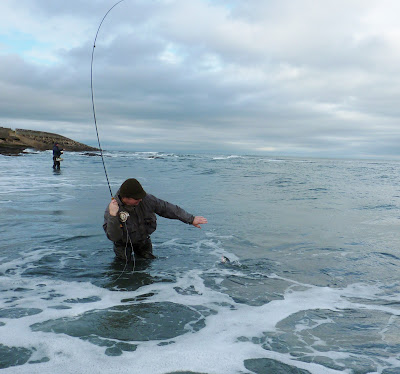 Meanwhile i struggled on , i'd had the odd take , lost a  fish  , but i finally did get a fish.halleluja! 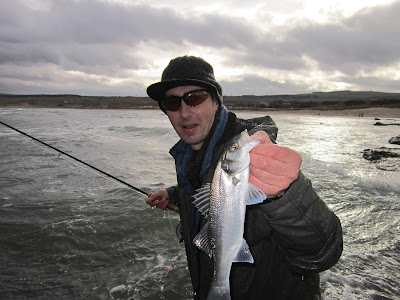 soaked we retreated for a coffee,  soaked  by the odd rogue wave,  before colin headed home and we had a few more casts. And no more luck. A big thankyou to Colin for showing us the ropes, without his guidance  i'm pretty sure i would still be waiting for my first bass!
Posted by Col at 22:58 5 comments:

the one eyed flash fly

I took Clyde for a walk along the canal this morning, on a section i haven't fished for many years now. I noted a few spots that looked really pikey along the way and also had a look at a near by pit which is reputed to hold some big pike. Back home for a couple of bacon rolls and a coffee,  and also a quick session on the vice to tie up a flash fly before heading out with the rod this time. 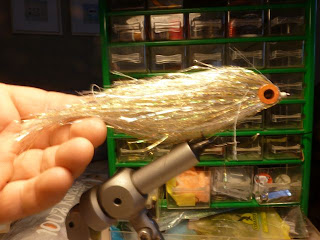 Fished the choice bits of the canal from the walk earlier and also had a few casts in the pit but disappointingly no takes so back in the car to a more familiar stretch.
Where a couple of wee jacks quickly fell to the charms of a green, white and red clouser 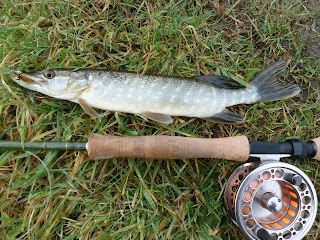 and then the best of the day took the now one eyed flash fly, need to glue them eyes in properly next time! 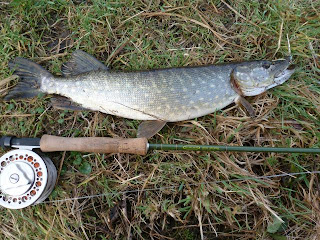 Don't leave home without them.

It's been mild all week, today was 11degrees , but it was drizzly and windy. decided to have a go up the canal , packed  a few biggish clousers tied  that got a fair bit of interest  on Sunday, and also remembered to grab a flash fly, a fly i wish i had on Sunday  .

The water had fairly good clarity , the barges haven't been able to get along the canal due to trees being down from the storms last month. So perfect for piking. First i tried a  kanekallon bait fish in fire tiger  colours and finally a small pike took it, which i landed then released. It wasn't exactly setting the water on fire though , so i changed to a red and white  clouser, but nothing , time to play the ace card , and put on a flash fly. Unlike most flash flies this one had a red litebrite head which is tied in on a wire a bit like a dubbing loop whether it was anymore deadly , i don't know.  Anyway , it worked with 5 jacks following for it's charms over the next hour or so and a few lost. 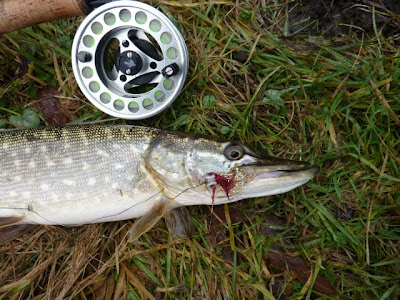 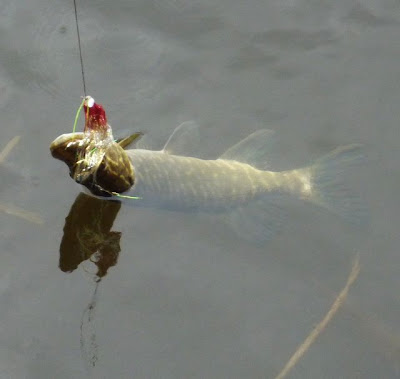 Oh i do like to be beside the seaside! 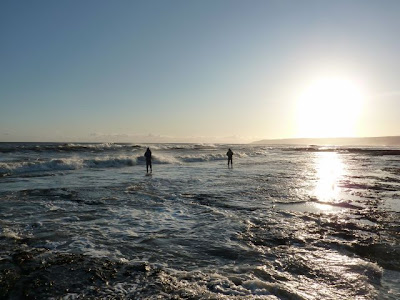 The plans were in place to do a bit bass fishing, flys tied, last minute of getting  line trays assembled etc. We also had the benefit of getting some info, by an experienced saltwater fly angler, who put us right on flies materials hook sizes and gave us the general feel for the area, thankyou Colin! We also met a angler tackling up to do a bit lure fishing, and we had a good blether, it was nice to meet Martin , an obvious fishaholic , who spends a lot of his time fishing allround  the country ,  in the sea. 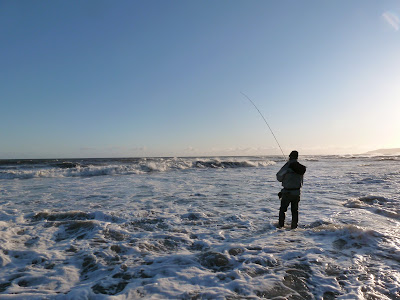 Unfortunately the sea was too wild to fish and it was a bit dirty, but i cannot wait to get back , when the going is good! More flies to tie , ordered up some more hooks, and converted another  basin into a line tray at work today , ...obsessed!

So me and Brian on the way home decided to pop up the canal to see if we could get a pike or two. grabbed a few essentials at my house , and before long we were setting up, half the basin was covered with ice , but we had a shot in the clear half. i put  on a fire tiger jumbo braid baitfish and on my first cast fish took got off, next same result and on the third cast he was hooked , but shortly threw the hook. We did both get a few more jabs here and there. Brian decided to try one of his red and white clousers, and it proved a real hit with the jacks he landed a brace before the end of the day. If it's windy next week, and it's looking that way , might do a bit of piking on the canal , ive also a wee pond or two  in mind.

an afternoon tying up clousers

Ive been tying up some clousers today for our saltwater trip tomorrow, used some of the hair exstension stuff and also some slinky fibre. Not sure what colours are best so tied up a variety of different colour combinations, hopefully one of them will work! 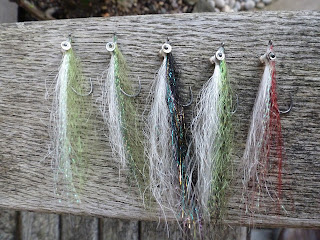 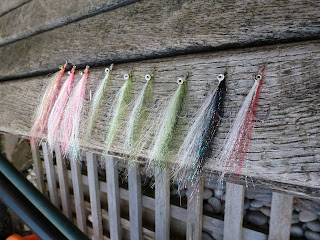 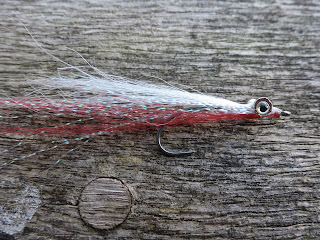 looking forward to my diamond hard kit arriving through the post so i can tie up a few surf candys too.
Posted by brian at 18:43 3 comments:


Back on the kanekallon (Jumbo Braid ) hair extensions for some baitfish patterns. First up a couple of pike flies. Got my hands on some Deer Creek Diamond hard and i find it's much quicker setter and true to it's endorsement is "virtually" tack free. Both have gills the pink one oval the other a shell sequin. 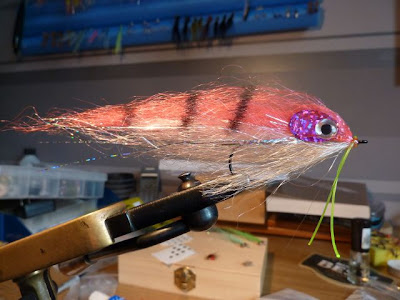 Next up a couple of Saltwater  flies.

Had a spare hour so gave the pike flies a test on my favourite canal basin. A few takes, dropped a few but a couple of wee jacks obliged, cant wait to give these a go on the lochs this year, i'll be tying a few with rattles to help stir up dour pike as for the saltwater flies, i hope to give them a trial shortly. 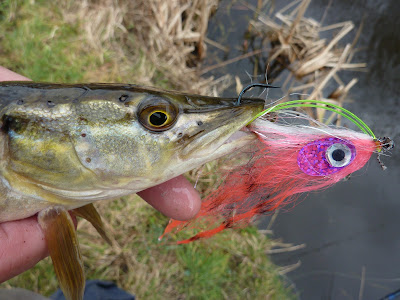 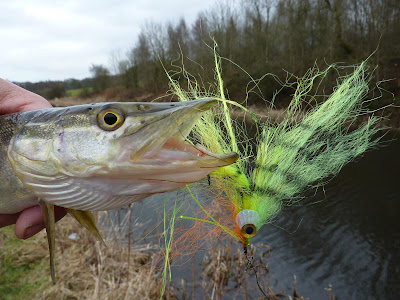 We were undecided on where to fish on friday night, the main river or one of it's tribs,  so the desision was made in the car on the way down this morning and we opted for the main river which was running clear and also a wee bit lower than some of our recent visits. we did our usual through a couple of big pools, wading deep czech nymping, it's a great method if a shoal of feeding grayling is found but if like today nothing seems to be happening in a hurry it gets really boring to be honest, perhaps being full of the cold and having a slight leak in my waders didn't help but my heart just wasn't in it and after a while i suggested to Col that we go to the trib instead of more deep wading in more huge pools, Col agreed and within half an hour or so we were tackling up on a much smaller river instead.

We worked our way upstream fishing the likely pools without success, but despite the lack of grayling it was still  much more enjoyable than searching the huge pools of the main river. It was nice to see the unmistakable  blue sheen of a kingfisher, and we also startled a couple of roe deer along the bankside. I did eventualy land a grayling too from one of our favorite pools, on a wee pink beaded nymph but unfortunatly that was our only fish for the day. Grayling time for us  is just about over for another winter, might get in another trip or two in but the prospect of looking for rising trout in season ahead sounds great! 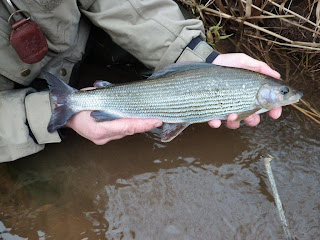