Just had my hols in Corralejo in Fuerteventura , fishing was pretty good. About a hour after arriving I snuck out the back of the apartment to have a go. I was expecting my first fish to be a ornate wrasse, but no it was a white bream. 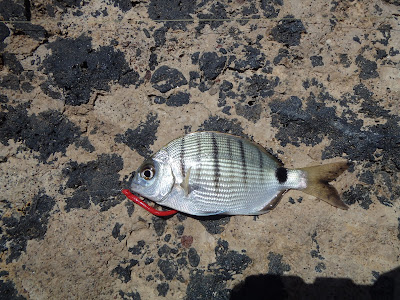 I followed that up with a painted comber .
.next up a wee derbio put in a appearance. 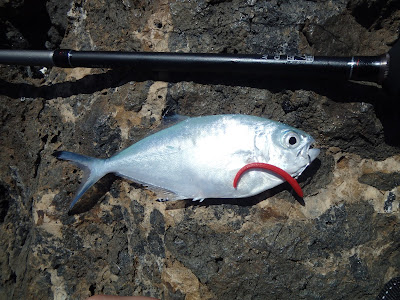 Then a dusky grouper took a liking for my isome chebarashka combi. 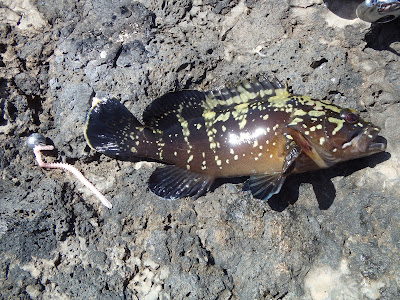 After that with the tide going out i had a go in the rock pools, tthey were full of Madeira gobies.Some of these gobies look like they've had a few battles , probably with the crabs? 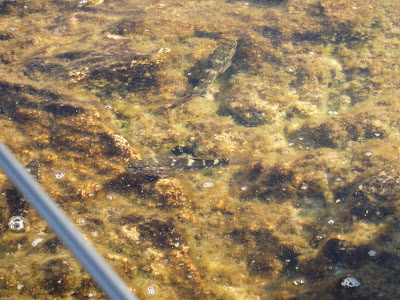 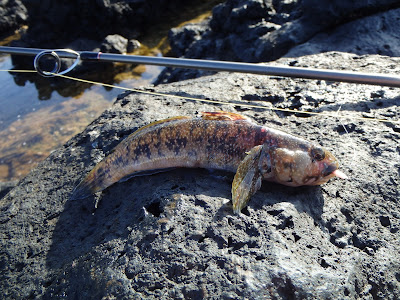 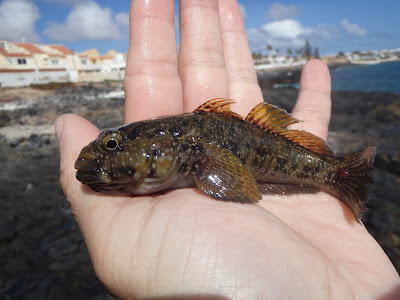 The last species of the day not sure what they are some sort of bream species was also getting pestered by something biting up my angle worms and even biting off my hook lenghts but i had suspicions of the culprit. 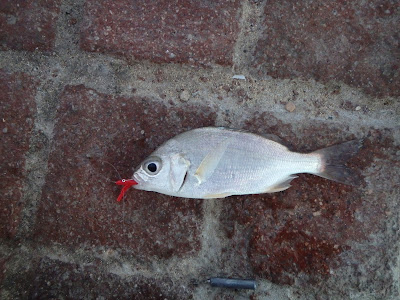 The next day i had a go at the back of the harbour. inside the harbour looked great a aquarium of big fish  and a few of the ones on my wish list parrot fish , but under spanish law there is no fishing allowed in harbours.

So i had a go at the back of the harbour made up of big boulders .First fish up was a canarian damsel fish. 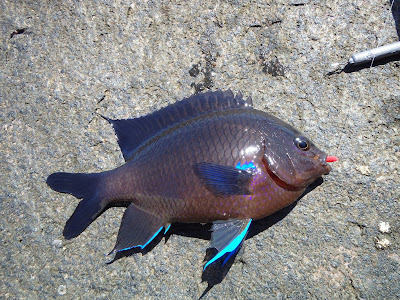 Folowed by more of the same and loads of these ornate wrasse. 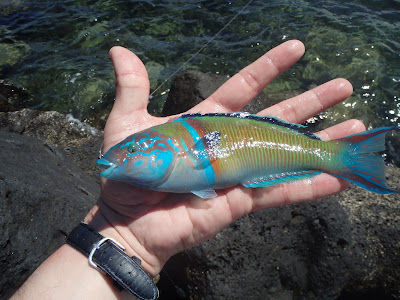 After a few already caught species i cracked another .A female emerald wrasse.
Frustrtingly i lost some fish that were smashing me at will when i tried to stop them ploughing for the snags , i knew exactly what they were and they became my most wanted.

That was my lot for that day next day again i returned but not before a visit to the tackle shop for some stronger flourocarbon   . Along with the ususal culprits i added to the species list a lizard fish. 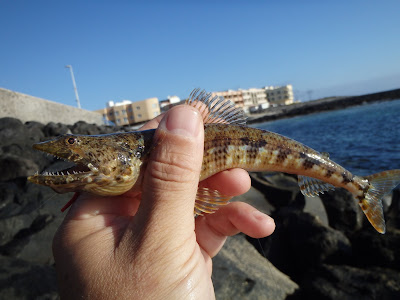 and the culprits for bite offs puffer fish 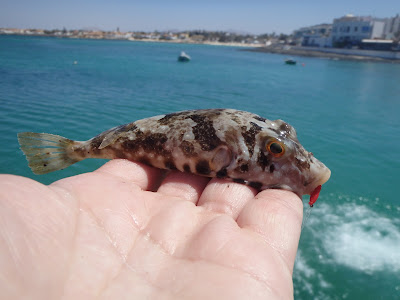 Next opportunityfishing saw me at a real smashing although popular mark with the locals .

Here i encountered and landed my most wanted parrot fish! 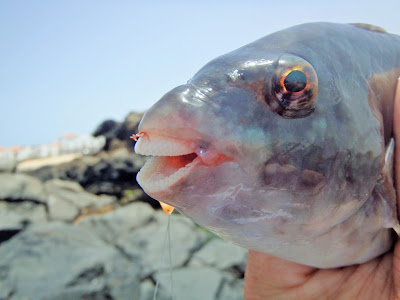 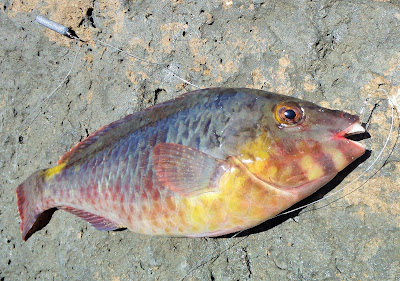 I managed quite a few parrots during the course of the week and lost a real cracker when i tried to lift it unfortunately the hook snapped. some more catches for the week.


Fuerteventura was great fun, like to go back shortly , id pack more gulp products and heavier nylon and more hooks next time.

Going for a Tumble

Another catch up . Went down to Dunbar harbour a few weeks ago.

Started in the rock pools at low tide managed a wee sea lss scorpion on a 0.9g jig head and lure combo.
After failing to find anyother  real decent rock pools and just about killing myself on the wet sea weed coverd rocks i went round to the harbour . there i caught some micro plaice , some flounder and some coalfish and some sea scorpions , unfortunately the innere harbour was a bit muddied so didnt produce.

The next day Scott invited me for a tour of st Abbs Head. I was fair excited about the prospects , Scott was straight into the coalfish on some wee metals , there a good average size too. He also did quite well with the Pollock on them , in fact he had 3 nice pollack through out the course of the day and they gave a really good account of themselves on the light gear. 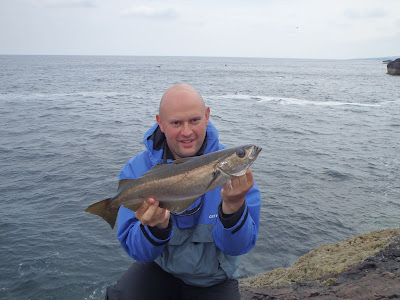 I was keen to get my first wrasse of the year . And after us getting some taps , one stuck he took a dropshotted  6" gulp! sandworm .
I lost a fish shortly after that i suspect was a bigger wrasse?

The swell increased as the tide came in and we decided to move to another mark not before taking on a untested mark which not only didnt produce as it was very snaggy it caused us a bit problems getting back up, with crumbling sandstone and loose soil, but ventually we were back on terra firma .
More details on scotts blog here .

After trying there we had a go in the harbour we had a few flounder before heading to Starney bay .


There the fishing was really slow then all of a sudden it kicked off , Scott managed another two pollack the last one gave us a fantastic visual fighting display in thecrystal clear water , i had a flouder and released a nice cod as i tried to get it to the landing area  , looks like it would be  good one for the fly rod as you can easily get in a backcast. 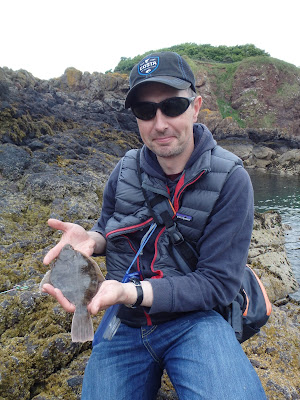 A big thanks to scott for the tour , really enjoyed it , its a awesome spot. 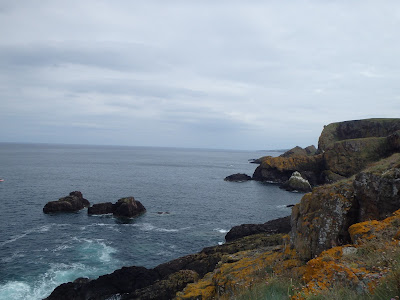 Been ages since i last done a post , mostly due to lack of time , and access to the pc .
Theres been a few fishing trips , the first i recall was a LRF fishing meet with Scott and Guy about a month ago  we met at Dunbar harbour . Whilst waiting for scott and guy to arrive i fished various spots in the harbour and manageda little sand goby on a  pink crazyfish tipsy worm attached to a heavy 7g cheburashka for control in the strong winds. 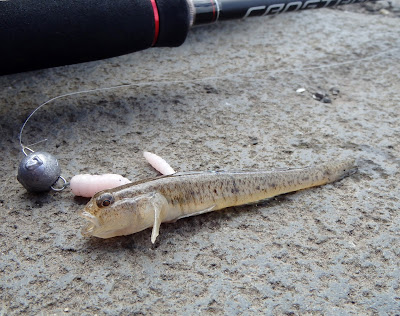 Not long after that Scott and Guy arrived and we fished in the corner for the various little flat fish and it wasnt long before we had a few little plaice between us. 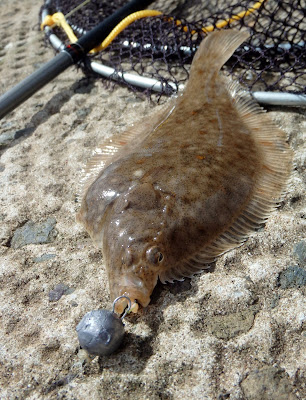 Later we moved in to the inner harbour as the tide began to come in , Scott between me and guy was hitting flounders pretty regularly whilst we couldn't get a fish . The way the isome worm was rigged was interesting and maybe the key , something i learned and ill remember .
After that we went down to st Abbs harbour to see if there was anything else around. We managed cod , coalies wee pollack and a few flounder . 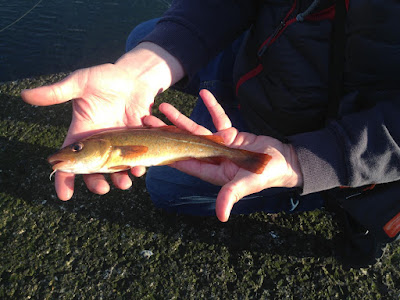 It was great meeting up with Scott again and fishing with Guy and hopefully the Light game fishing group that Scott has started will flourish, its a great opportunity to learn new tactics and share ideas , plus unlike many forms of fishing this does suit the social aspect, which I like.


Ive also had the odd trout trip though theyve been pretty uneventful , with often  coloured water and high winds. 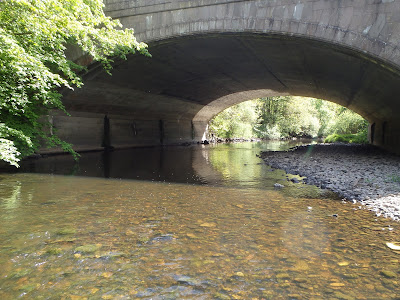 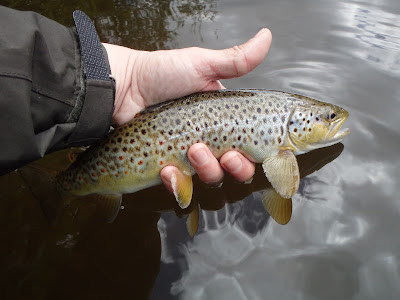 Last weekend i went to visit my parents in Arbroath my brother happened to be home in Arbroath to at the time so we planned for a few hours on Elliot beach , with the prospect of a turbot. 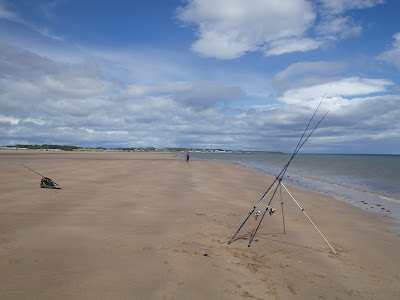 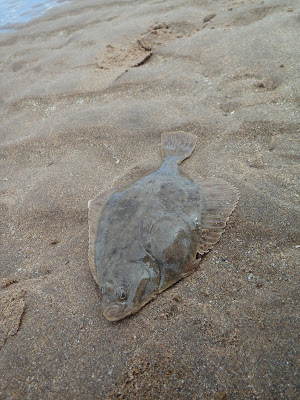 lots of little flounders and a single turbot.Not  bad  for a few hours fishing.

That pretty much brings me up to date. Was hoping for a trip to Skye with Brian this weekend but due to a dog wih a split paw I've got to keep my eye on him this weekend . Still I've got a holiday in Fuertevenura next week and yes ill be taking the rod, and maybe ill get out before then. So until next time ................
Posted by Col at 13:47 4 comments: