A change of Coarse

I walked the dog along the canal today, where i spotted a few shoals of roach here and there ,a  few perch amongst them and the usual jack pike in the margins. Was thinking about going for the pike but decided it would be a nice change to target the roach.  So at 2:30pm i grabbed the gear and had a go. I tried the dries, first  a shuttlecock buzzer i briefly hooked into one, but they quickly sussed it out. so tried a few various dries , including a size 14 black klink but they weren't fooled, so into the fly box and i selected a small size 16 brown turkey biot nymph with a black(actually called gunmetal) 2.4mm bead. With instant results. 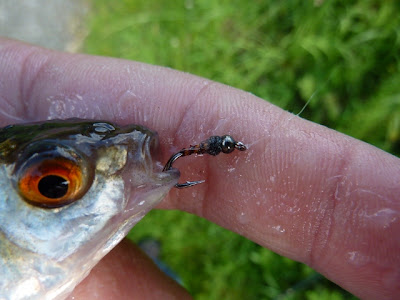 Shoals that seemed to be sleeping suddenly woke up there was a good mix of sizes with a few big ones amongst them. The important thing was seeing the fish take the fly so Polaroids were essential , this would be either by seeing a flash of the flank or one in the shoal shooting forward out of suit with the rest of the shoal. I'm convinced the plop of the fly was a trigger as was the decent as i further experimented hanging the fly off a large klink , the minute the decent stopped the fish lost interest  the , klink you might think would be good for showing takes but if i was looking at the klink i would have missed fish it never moved though a few fish did show interest to the klink , they did not take it properly a bit like mullet mouthing bread, a better presentation was a single nymph, takes were within seconds of it hitting the water.

A few fish. I reckon fly fishing is a good way of getting the better roach . Or atleast it was the case today. 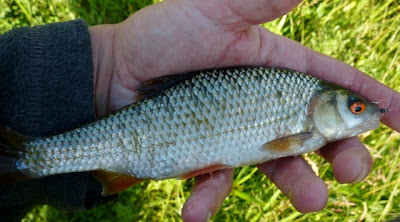 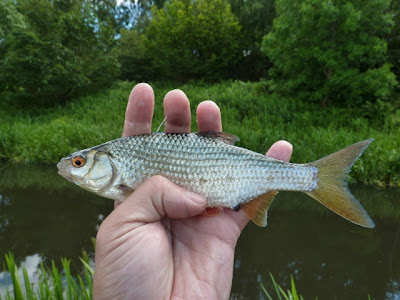 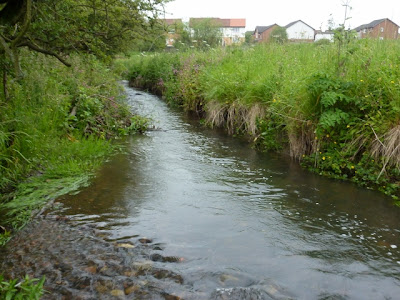 22nd June
With the main rivers in spate, few options were available locally. The mains though was carrying more water but it didnt look that dirty, so i decided to take the dog and wee burn  rod out for a wander tonight . There is'nt much of the burn thats accessible at this time of year most is very overgrown with fronds of grass breaching the stream . But there are a few pools, one in particular , where ive had loads of fish his season , produced this fat wee trout, on a glister nymph a cracker for the burn. 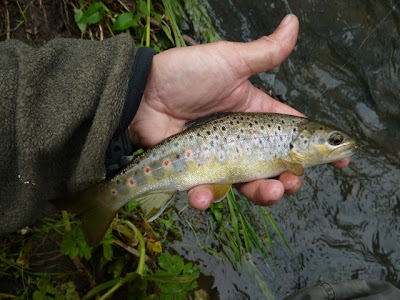 That was my lot on a nymph tried the bugger but nothing then i put on a big turk variant, and got a offer, but nothing else took in that wee pool. So i headed downstream , to a few other bit's i know. Alfie was finding it difficult to keep his paws dry. 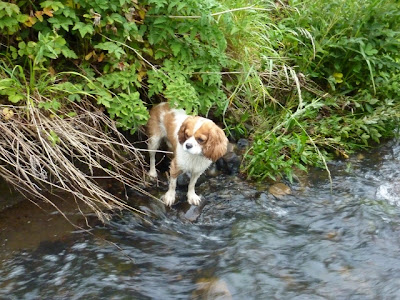 I stuck with the dry and got another and missed another two.  And that was it i'd ran out of fishable water, a good way to spend a hour. 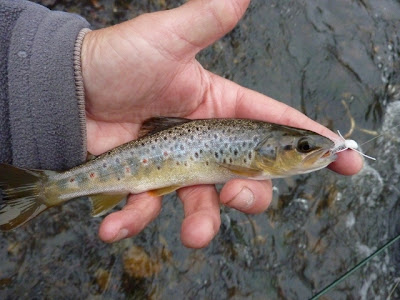